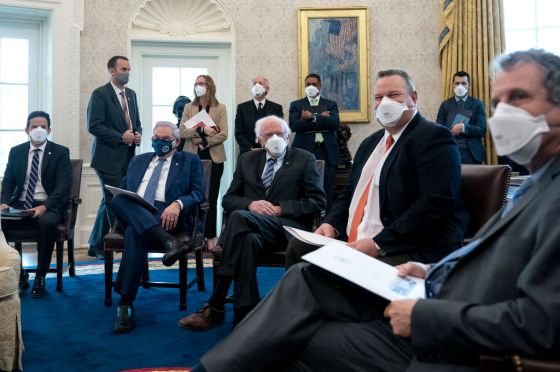 In the heat of the 2020 Democratic primary a year ago, Joe Biden and Vermont Sen. Bernie Sanders represented starkly different visions for their party. When Biden finished a dismal fifth in the New Hampshire primary and Sanders soared to victory, many moderate Democrats were fearful that Sanders would run away with the nomination, and predicted that disagreements between progressives and centrists would undermine a Democratic victory, not only in the general election, but for years to come.

Those doomsday fears have yet to come to fruition. With Democrats now in unified control of Washington, the newly-minted President Biden is relying closely on his former progressive rival to push a $1.9 trillion COVID relief package through Congress. “Senator Sanders, along with Senate Majority Leader Senator Chuck Schumer, will be driving the process in the Senate,” says Bill Dauster, the budget committees’ incoming chief legal counsel. (Aides say Sanders and Schumer are working closely together).

While it’s hardly unusual for a new President to work hand in hand with a former adversary, the moderate and progressive Democrats’ current alignment is notable—in comparison not only to the grim predictions during the primary, but also to Republican lawmakers’ ongoing feud over their own party’s future. The robust cooperation is partially born of political necessity: Sanders, who is now chair of the Budget Committee, is key to passing any sweeping legislation this year. While Democrats narrowly control a 50-50 split Senate, with Vice President Kamala Harris wielding the tie-breaking vote, they are unlikely to garner the 60 votes required to pass any ambitious legislation under regular order. Instead, Democrats’ best bet is to utilize a wonky budgetary procedure known as reconciliation that allows lawmakers to pass budget-related bills with a simple majority.

This is how they intend to pass Biden’s $1.9 trillion dollar COVID-19 relief bill. On Feb. 5, the Senate passed a budget resolution, authored by Sanders’ committee, that paved the way for the legislation to progress. The White House recognizes Sanders’ crucial role in advancing the legislation. “The President and Vice President have been clear we have to work with our allies on the hill and that includes Senator Sanders,” says one Senior White House official, noting that both men have prioritized addressing income inequality, which has worsened during the pandemic.

Sanders and other Senators met with Biden in the Oval Office on Feb. 3, and Sanders and his staff have been in frequent communication with Biden Chief of Staff Ron Klain, Director of the National Economic Council Brian Deese, and Bharat Ramamurti, one of Deese’s deputies. One Sanders aide described those conversations as “enormously positive, helpful and fruitful.” The Senator has also been in touch with Vice President Kamala Harris, who he called before the inauguration, and with whom he has a good working relationship, according to the White House official.

This cooperation is a product of the familiarity between Biden and Sanders. Prior to their campaign rivalry, they were colleagues for two years in the Senate, where Biden continued to spend time after becoming Vice President. “I’ve known Biden for the last fourteen years, more or less, since I’ve been in the Senate, and worked with him a little bit when he was Vice President,” Sanders told the New Yorker last June. “I think what you’re going to see is a closer relationship.” In January, when Biden nominated Marty Walsh as Secretary of Labor, he expressly noted that while he had considered Sanders for the role, he needed him in the Senate because “we can’t put the Senate at risk with a special election in Vermont.”

Sanders has been unwavering in his support for Biden’s relief package, even as he sides with progressives about the need for more spending. And Biden has stood firm on the need for a large package, even as Republicans balk at the price tag, remaining steadfast in his support for sending $1,400 checks to tens of millions of Americans and a $15 minimum wage increase—a resolute stance that pleased Sanders and his team.

As the nitty-gritty of the legislative process unfolds, including writing the final language of the bill, some fissures between Biden and Sanders are expected. In an interview with CBS News on Feb. 7, Biden suggested that a proposed $15 dollar minimum wage increase was unlikely to end up in the final package, even with his support, as it would be challenged for falling outside the budgetary requirements of reconciliation. Sanders will make the case to the Senate parliamentarian to include the minimum wage provisions in the bill. “I put it in, but I don’t think it’s going to survive,” Biden said.

Sanders’ team was not pleased with the President’s comments, according to a source familiar. Sanders said on CNN that he hoped the President was incorrect and that he was assembling a “room full of lawyers” to argue for including the minimum wage provision. There also could be discrepancies between the two leaders on the income threshold for receiving the $1,400 checks, which is still under negotiation. Sanders has said he wants the threshold to remain at $75,000 per person and $150,000 per couple, but it is unclear if that can garner enough support for that in the Senate.

Still, Biden and Sanders—and the moderate and progressive wings of the Democratic Party that they represent—remain united on the larger objective: pushing more than a trillion dollars in federal assistance out the door. Aides to both Biden and Sanders say this underlying unity is partially the result of deliberate efforts to bridge the divide between moderates and progressives after last year’s crowded primary. In April, Sanders formally endorsed Biden for President and in May, Sanders and Biden unveiled six “unity task forces,” where each camp appointed experts to draft policy proposals on climate change, criminal justice reform, the economy, education, health care, and immigration. The task forces were a conscious effort on Biden’s part to bring Sanders into the fold, says one former Biden aide. Sanders was receptive, wary of repeating the 2016 intra-party schism that resulted in some of his supporters sitting out the election.

Biden later incorporated several components of the unity task force economic plan, like grants to small businesses in underserved communities, the minimum wage increase, and enhanced funding for food assistance programs, into his blueprint for the American Rescue Plan. One Sanders task force appointee, who requested anonymity to speak candidly about internal dynamics, says the Sanders team’s biggest influence on the Biden economic package was in the White House’s strategic decision to resist a scaled-down version that would likely win more bipartisan support. “There were a lot of discussions in the task force about the [2009] Recovery Act and the Great Recession and how Obama did not go far enough and how that not only hurt the American people but had consequences politically,” says the appointee. “The approach and the conviction to get this done for the American people is just a tone that I think we helped set even further—not just with the President but with the advisers around him.”

A senior Biden campaign adviser pushed back on that assessment, arguing that the Administration’s support for the bill is the result not of progressive pressure but the enormity of the problems facing the nation. But, the advisor added, the outreach to Sanders’ team was still vital. “Biden, early on, sent a signal that was really important that Sanders and [Elizabeth] Warren and [progressives] have a voice in this administration,” the adviser said. “And I think it has come to fruition.”

With reporting by Brian Bennett/Washington

Texas GOP Rep. Ron Wright Dies After Contracting COVID-19
Donald Trump’s Impeachment Trial Begins This Week. It Will Offer a Glimpse into the Future of the GOP