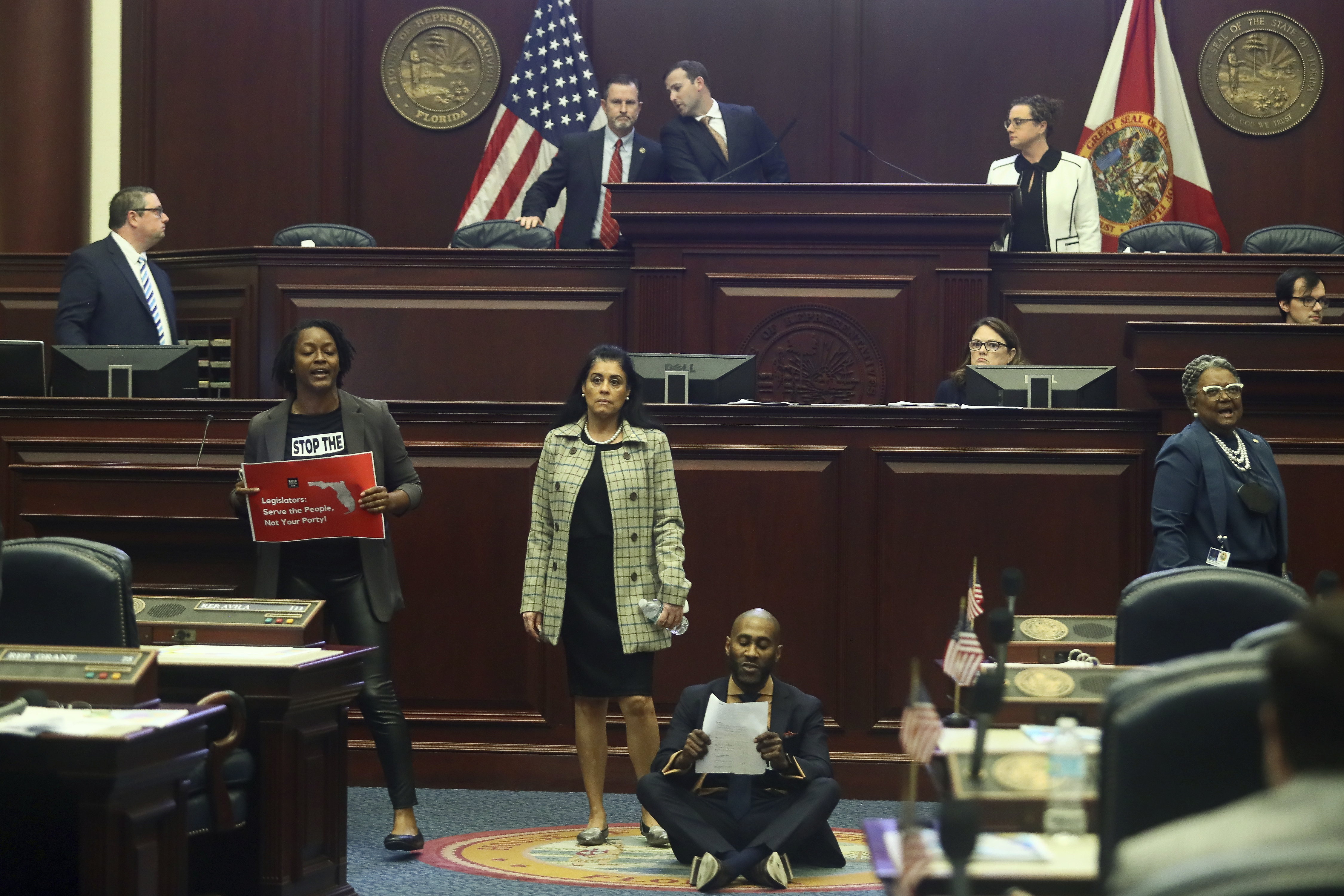 The League of Women Voters of Florida, which successfully challenged Florida’s last round of maps passed a decade ago, filed the lawsuit in circuit court in Leon County, along with other organizations such as Black Voters Matters and Florida Rising, as well as 12 voters living across the state.

The groups filed the lawsuit less than 24 hours after the GOP-controlled Legislature passed the bill along party lines in chaotic fashion as Black Democrats were loudly protesting on the House floor while Republicans voted to send the map to Gov. Ron DeSantis. DeSantis is expected to sign off on the proposal since it was drawn by his own staff.

“The League and the other plaintiffs have chosen to not stand by while a rogue governor and a complicit state Legislature make a mockery of Florida’s Constitution and try to silence the votes and voices of hundreds of thousands of Black voters,” said Cecile Scoon, president of the League of Women Voters of Florida in a statement.

The National Redistricting Foundation, the group led by former U.S. Attorney General Eric Holder, is helping support the lawsuit, and lawyers from the Washington-based Elias Law Group are working on the challenge.

“Republicans across the country tried — and completely failed — to gerrymander their way to a congressional majority,” Holder said in a statement. “In response to this defeat, DeSantis has bullied the legislature into enacting a map that does not allow for a fair electoral contest, and instead draws Republicans an illegitimate and illegal partisan advantage that they have not earned from the voters.”

The governor’s office as well as Senate President Wilton Simpson (R-Trilby) and Speaker Chris Sprowls (R-Palm Harbor) did not immediately respond to a request to comment.

But the lawsuit was well anticipated, and state legislators agreed to set aside $1 million along with the new map to help defend the proposal.

Florida gained one congressional seat in 2022 due to population growth, for a total of 28. Republicans currently hold a 16-11 edge, and the map that was initially approved by the Legislature last month would have increased the GOP advantage by two seats.

But DeSantis vetoed that map and insisted that it was unconstitutional because it still preserved a likely Black congressional seat in the Jacksonville area. His legal team maintained that such a configuration ran against recent U.S. Supreme Court rulings.

While Republicans called DeSantis’ assessment a “novel legal theory,” they accepted his argument and during a special session held this week passed his map, which they maintained was still “constitutional.” That map would likely give Republicans a 20-8 edge.

But in their filings, the groups challenging the map contend the proposal violates Florida’s voter-approved anti-gerrymandering standards — called Fair Districts — that were first approved by voters back in 2010.

The lawsuit alleges that the decision to break up the seat now held by Rep. Al Lawson (D-Fla.) in northern Florida runs counter to a Florida constitutional requirement that seats held by people of color cannot be diminished. Those suing also argue that the newly approved map is also defective because it is an “extreme” gerrymander that was done to aid Republicans even though state law says maps cannot be drawn to benefit one political party over another.

The map approved by the Legislature not only dismantles Lawson’s seat, but changes the makeup of the seat now held by Rep. Val Demings (D-Fla.) so that Black voters no longer constitute the largest share of Democratic primary voters. The new map also would potentially lead to a flip of the seat in the Tampa Bay area now held by Rep. Charlie Crist (D-Fla.), who is not seeking a new term because he’s running for governor. The Central Florida district held by retiring Rep. Stephanie Murphy (D-Fla.) would also become a GOP-friendly district.

Russia Is Using Rape As A Weapon Of War Against Ukraine
Russians try to storm Mariupol plant, strike Odesa