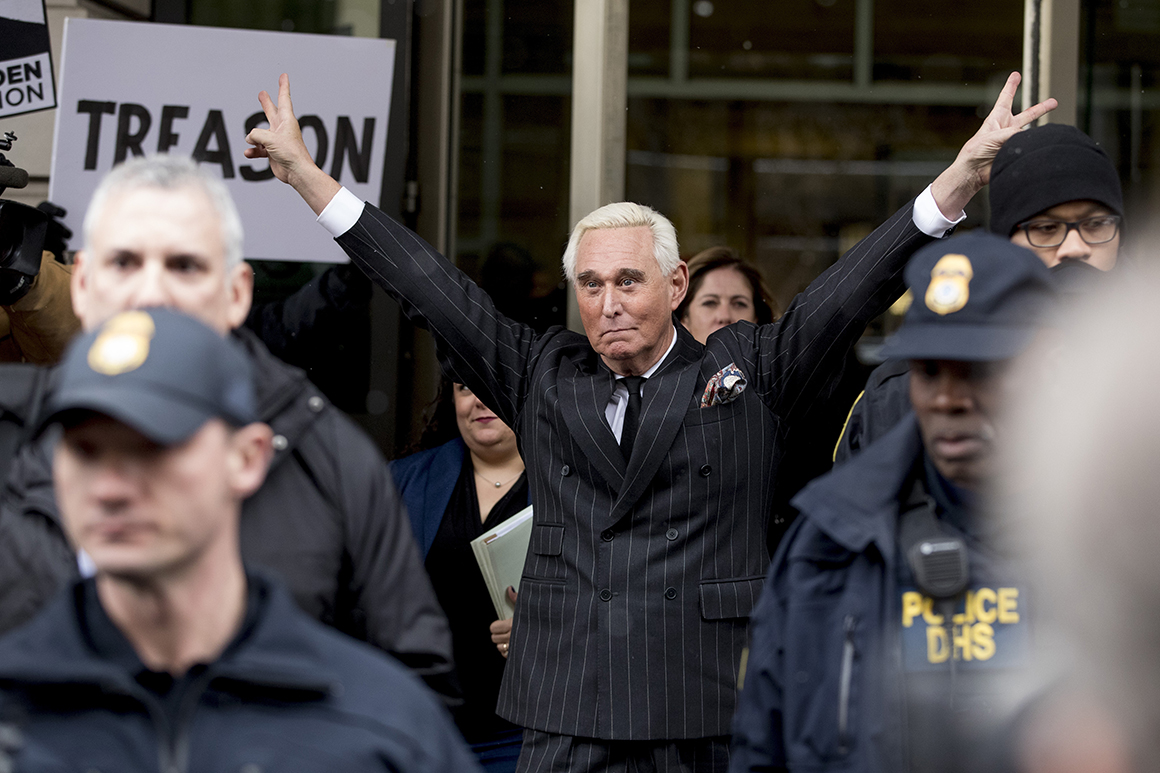 The pardons of Manafort and Stone effectively nullify the most significant convictions won by special counsel Robert Mueller and his team, part of Trump’s incessant drive to dismantle any vestiges of Mueller’s work, which included a stinging critique of Trump’s willingness and encouragement of Russian help in his 2016 campaign — even if it stopped short of alleging a conspiracy.

Stone was convicted in November 2019 for lying to the House Intelligence Committee about his efforts to make contact with WikiLeaks founder Julian Assange, and for threatening a witness connected to the probe. Trump commuted Stone’s sentence earlier this year shortly before he was slated to go to prison.

Manafort was convicted for a series of financial crimes stemming from his overseas lobbying work and was sentenced to seven-and-a-half years in prison. However, after serving about two years behind bars, he was moved from prison to house arrest in May due to the coronavirus pandemic. Despite the Trump pardon, Manafort may not be entirely in the clear.

Manhattan District Attorney Cy Vance Jr. has been pursuing criminal fraud charges against Manafort in state court, but the case has been rejected by a trial and appeals court due to a strict double jeopardy law in New York. A spokesman for Vance said Wednesday that Trump’s pardon of Manafort reinforces the need for him to face justice in New York.

"This action underscores the urgent need to hold Mr. Manafort accountable for his crimes against the People of New York as alleged in our indictment, and we will continue to pursue our appellate remedies,” Vance spokesman Danny Frost said in a statement.

The pardon of Manafort, in particular, will likely be unwelcome by some lawmakers on both sides of the aisle. The Republican-led Senate Intelligence Committee issued a scathing report on Manafort’s activities during the 2016 presidential election, including his close ties and collaboration with an associate, Konstantin Kilimnik, who the panel assessed to be a Russian agent.

Sen. Ben Sasse (R-Neb.) a member of the Senate committee, said the raft of Trump pardons — including Stone and Manafort’s — were “rotten to the core.”

Mueller had previously assessed Trump’s overtures to Manafort as potential evidence of obstruction of justice, noting in his report that dangling pardons could have constituted a crime. “During Manafort’s prosecution and when the jury in his criminal trial was deliberating, the President praised Manafort in public, said that Manafort was being treated unfairly, and declined to rule out a pardon,” Mueller’s report noted. “After Manafort was convicted, the President called Manafort “a brave man” for refusing to ‘break’ and said that ‘flipping’ almost ought to be outlawed.”

A former top prosecutor for Mueller, Andrew Weissmann, complained bitterly Wednesday night about Trump’s recent series of pardons. However, he said they could be used in a potential future prosecution of Trump for obstruction of justice.

“This is what you get if you give the pardon power to a mob boss,” Weissman said on MSNBC. “We all know as we’re sitting here talking that the next shoe to drop is going to be pardons for his family and for himself. … The president faces criminal exposure for obstruction of the Mueller investigation, and what we’re seeing is the last few days is basically a confession.”

“Everything that he is doing now can be just additional evidence of that obstruction," Weissmann added. “He may get hoisted on his own petard.”

For his part, Manafort quickly took to Twitter Wednesday night to praise Trump for his decision.

“Mr. President, my family & I humbly thank you for the Presidential Pardon you bestowed on me. Words cannot fully convey how grateful we are,” Manafort wrote, his first tweet in four years.

Stone welcomed the pardon and complained he’d been subjected to a “Soviet-style show trial on politically-motivated charges.”

The longtime political provocateur also urged the president to extend clemency to a key figure in the release of hacked emails during the 2016 campaign, Julian Assange, and to National Security Agency leaker Edward Snowden.

“Other good Americans have been victims of a corrupt system made to serve venal power-seekers,rewarding deceit and manipulation, rather than reason and justice. President Trump can be the purveyor of justice over the vile machinations of wicked pretenders to the mantle of public service,” Stone wrote.

Christie later became a supporter of and adviser to Trump and chaired the transition, but was denied an administration post due to ongoing tension with Jared Kushner that appeared to stem from lingering ill will over his father’s run-in a decade earlier with the hard-charging federal prosecutor.

Missing from Trump’s second wave of pre-Christmas pardons were other figures connected to the Russia probe, like Manafort’s longtime deputy Rick Gates, who became a key cooperating witness with Mueller’s team but has since sought to ingratiate himself to Trump’s allies. The list also doesn’t include former Trump adviser Steve Bannon, who fell out of favor after giving a blistering interview about the Trump family for a book.

Also absent from the latest round: Trump’s former lawyer Michael Cohen, who turned sharply against Trump and pleaded guilty to charges of tax evasion and obstruction of Congress, has cooperated with prosecutors in multiple investigations,

Cohen complained bitterly on Twitter about being left out.

“What happened tonight shows how broken the whole criminal justice sustem [sic] is,” Cohen wrote. “Despite me and family being threatened by @POTUS @realDonaldTrump, I still cooperated with a dozen federal/state agencies, Mueller, Congress…and all these criminals receive #pardons. This is wrong!”

Trump’s second batch of politically charged pardons in two days also includes other figures with strong political connections. After pardoning three former GOP Congressmen Tuesday, the president extended another pardon to ex-Rep. Mark Siljander (R-Mich), who was convicted of obstruction of justice and failing to register as a foreign agent.

Trump also pardoned longtime Rand Paul ally Jesse Benton, who was indicted in 2015 while running a Paul super PAC. Benton was charged with bribing an Iowa state senator in 2011 to back Paul’s father, Ron Paul, who was seeking the presidential nomination at the time. The younger Paul attacked the Justice Department’s timing of the indictment, which came just before GOP presidential debates at a time when Paul was considered a contender for the nomination.

A former senior administration official said no one should be surprised by the people Trump pardoned, many of whom are in the president’s orbit.

“Trump has always been a loyalty guy,” said the ex-aide, who asked not to be named. “I don’t think he cares or has cared about the criticism for the last four years.”

As of Wednesday, Trump has issued 94 pardons and commutations. Most of those have gone to people with political ties to the president or who have advocates in Trump’s political circles.

More than 14,000 petitions for pardons and commutations are pending at the Justice Department, but most of the cases Trump has granted did not submit requests through the standard process.

Anita Kumar and Evan Semones contributed to this report.

Part III: Poverty Is a Problem, not Inequality
Social-media platforms are destroying evidence of war crimes