Tottenham are closing in on a loan deal for Benfica‘s 25-year-old Brazilian striker Carlos Vinicius, who has an £89m release clause in his contract. (Mail)

The Reds are also set to benefit from former midfielder Philippe Coutinho’s Barcelona lifeline, with a further £4.4m due if the 28-year-old Brazilian makes another 14 appearances. (Mirror)

Manchester United have denied speculation linking them to signing 23-year-old England international Ainsley Maitland-Niles, who can play in defence and midfield, from Arsenal. (Manchester Evening News)

Arsenal are in talks about loaning 21-year-old French midfielder Matteo Guendouzi to Marseille. (Telefoot, via Express)

The Gunners have also been boosted in their pursuit of 22-year-old French midfielder Houssem Aouar from Lyon, with the club’s president Jean-Michel Aulas admitting they may “lose two players” before the deadline. (Metro)

Newcastle United are set to rival Valencia in trying to sign 26-year-old Juventus and Italy defender Daniele Rugani, who has also been linked with Fulham, West Ham and Sevilla. (Sportitalia, via Football Italia)

Roma’s latest offer for Manchester United and England centre-back Chris Smalling is for £10.9m plus £2.7m in add-ons and is being considered by the Old Trafford club. (Mail) 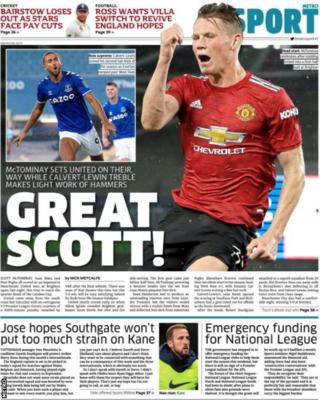