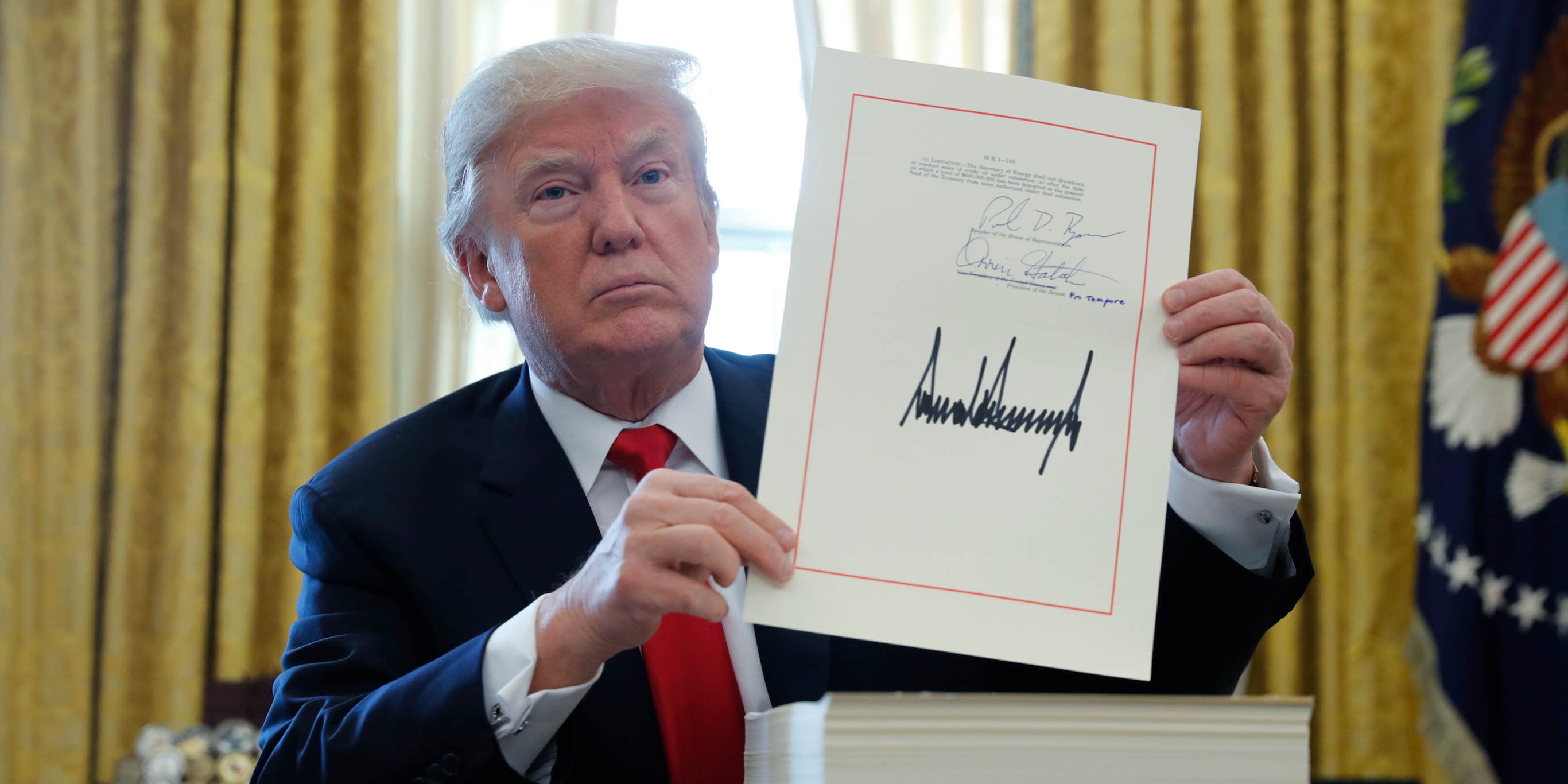 The law was the biggest overhaul to the nation’s tax code in three decades, and the president pitched it as “rocket fuel” for the American economy. It permanently slashed the corporate tax rate to 21% from 35% while also providing temporary benefits for individuals and their families.

Critics argued it was a windfall for massive corporations at the expense of the middle class. Meanwhile, supporters of the tax cuts contended it would unleash an economic bonanza. Businesses would invest in their operations, they said, resulting in improved worker productivity and higher wages.

Treasury Secretary Steve Mnuchin, among others, said the law would juice the nation’s gross domestic product to 3% (or more, as Trump said 6%) and soon pay for itself and spread prosperity.

But the law has achieved none of the ambitious goals that Republicans put forward – and there are scant signs they ever will.

There were short-term bumps in GDP growth and business investment that faded relatively quickly. Wages increased, but not to the extent Republicans promised.

And the law’s hefty price tag has not been offset by more tax dollars flowing to government coffers. Corporate tax receipts are down 23% since fiscal 2017. The Congressional Budget Office projected the GOP tax cuts will widen the deficit by $1.9 trillion over a decade.

Further, one study recently found evidence suggesting that corporations are now paying the lowest tax rates in four decades. The average rate last year for 400 of the largest US companies averaged out to 11.3%.

Here are seven charts demonstrating why the tax cuts were not the “rocket fuel” Trump promised.

GDP growth has averaged 2.4% since Dec. 2017, short of the 3% estimate that the Trump administration repeatedly touted. 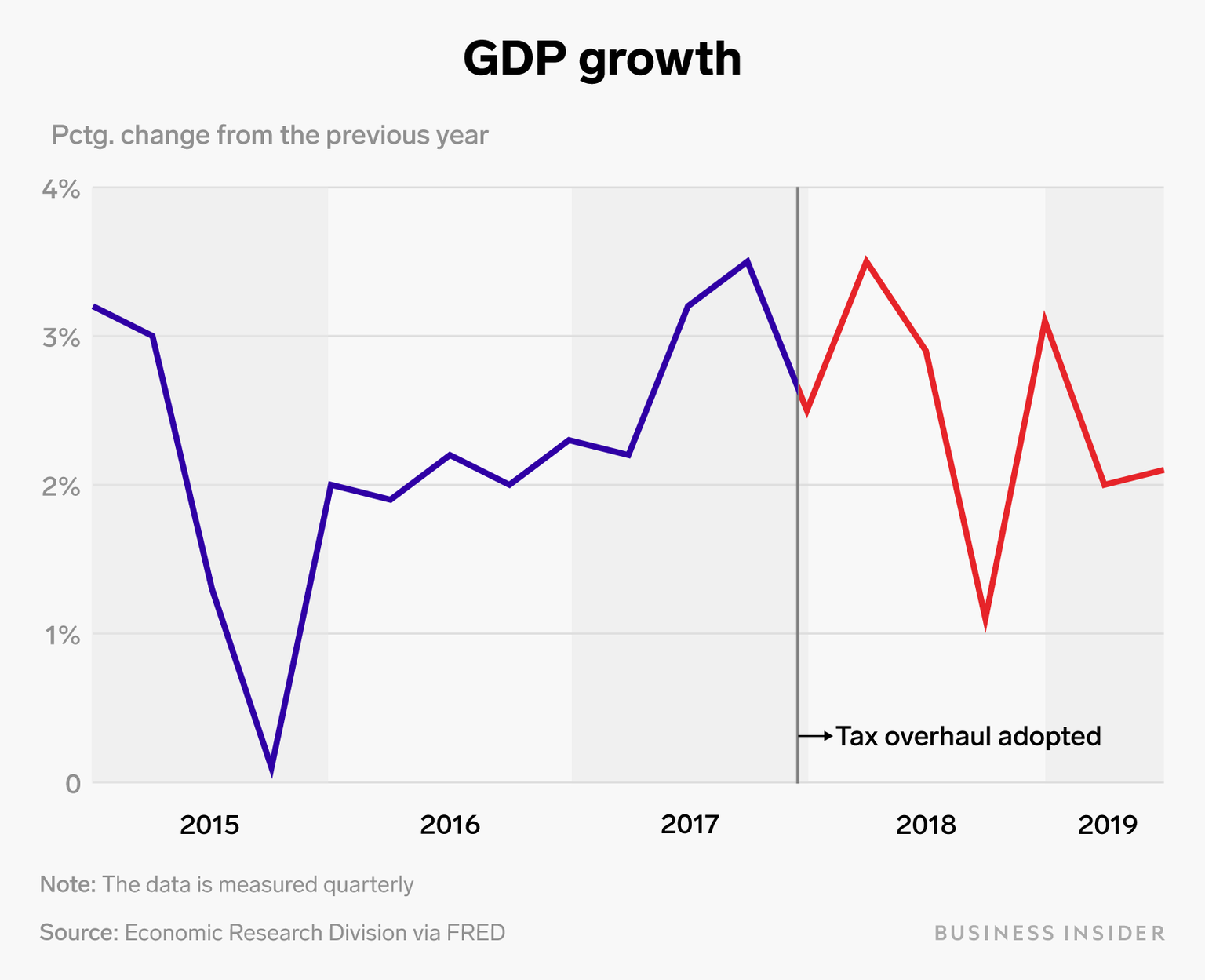 US GDP ticked upward in the early months of 2018, helping the economy achieve 3% growth during the first year of the law, an early success for it.

However, that momentum slowed in 2019, the product of anxiety among business leaders on Trump’s trade wars and weak demand overseas.

Most economists also don’t believe that reaching and keeping growth at 3% is feasible in the immediate future. The CBO recently projected that GDP growth would slow through the next decade to just under 2%.

A White House report earlier this year found that maintaining a sustained “boom” with 3% annual growth would require infrastructure spending, a new round of tax cuts or more deregulation – which are unlikely to pass the Democratic-led House anytime soon.

Job growth has kept steady, but the tax cuts had a limited impact. 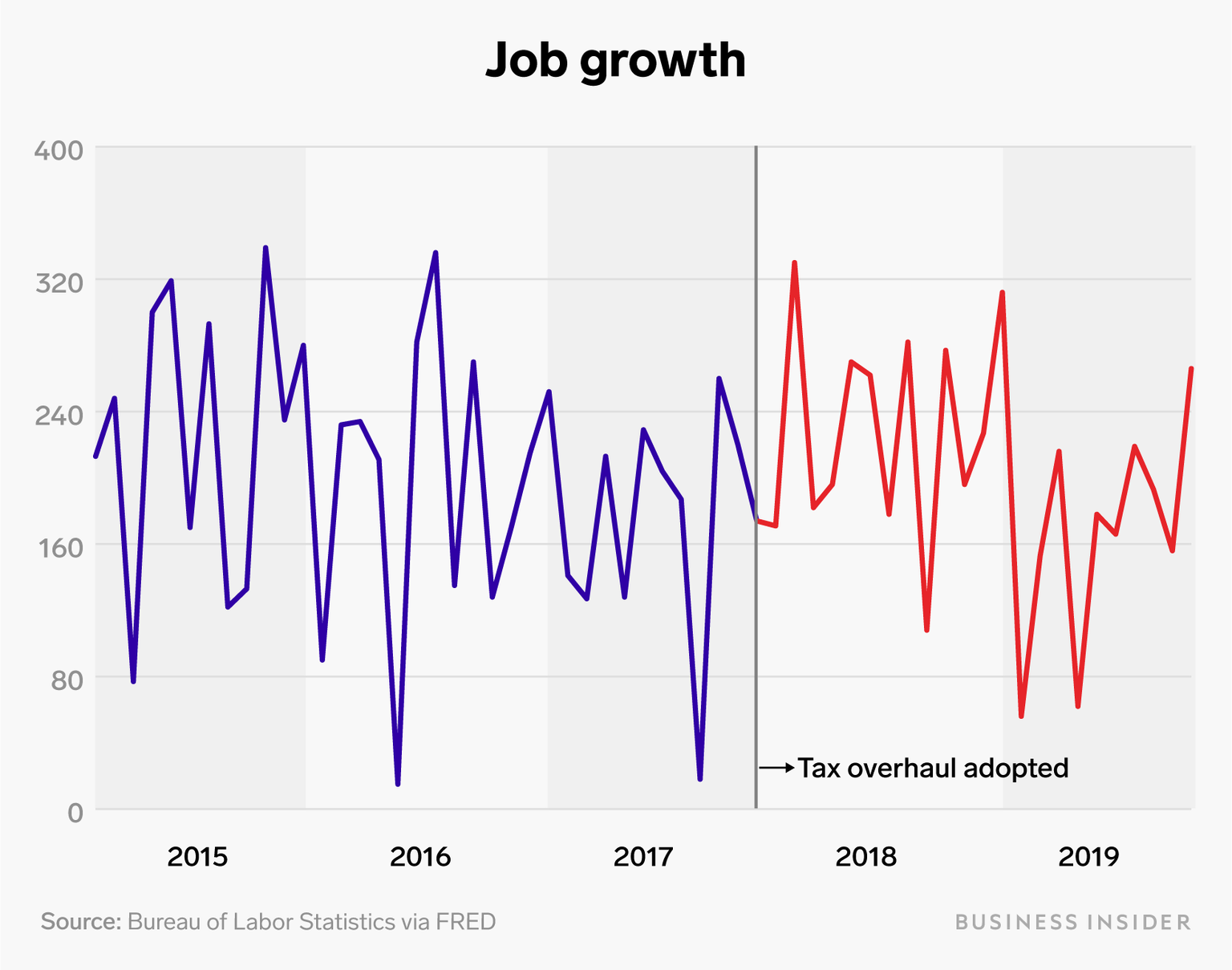 The number of new jobs gained in the immediate months following the cuts were similar in scale to the previous few years. Some corporations like Apple said they would add 20,000 domestic jobs over five years and others such as Walmart increased starting wages and expanded some benefits.

Still, automation and outsourcing continued to hit other industries. Bank of America cut 5,000 jobs in 2018 even as it generated billions in record profits.

Employment remains steady though the economy shows signs of slowing down. But studies suggest the tax cuts had a limited impact promoting job growth.

The National Association of Business Economics released a survey earlier this year finding the overwhelming majority of US businesses – or 84% – didn’t speed up their hiring or invest more as a result of the Republican tax cuts.

The tax cuts didn’t dramatically ramp up what workers earn in an average hour. 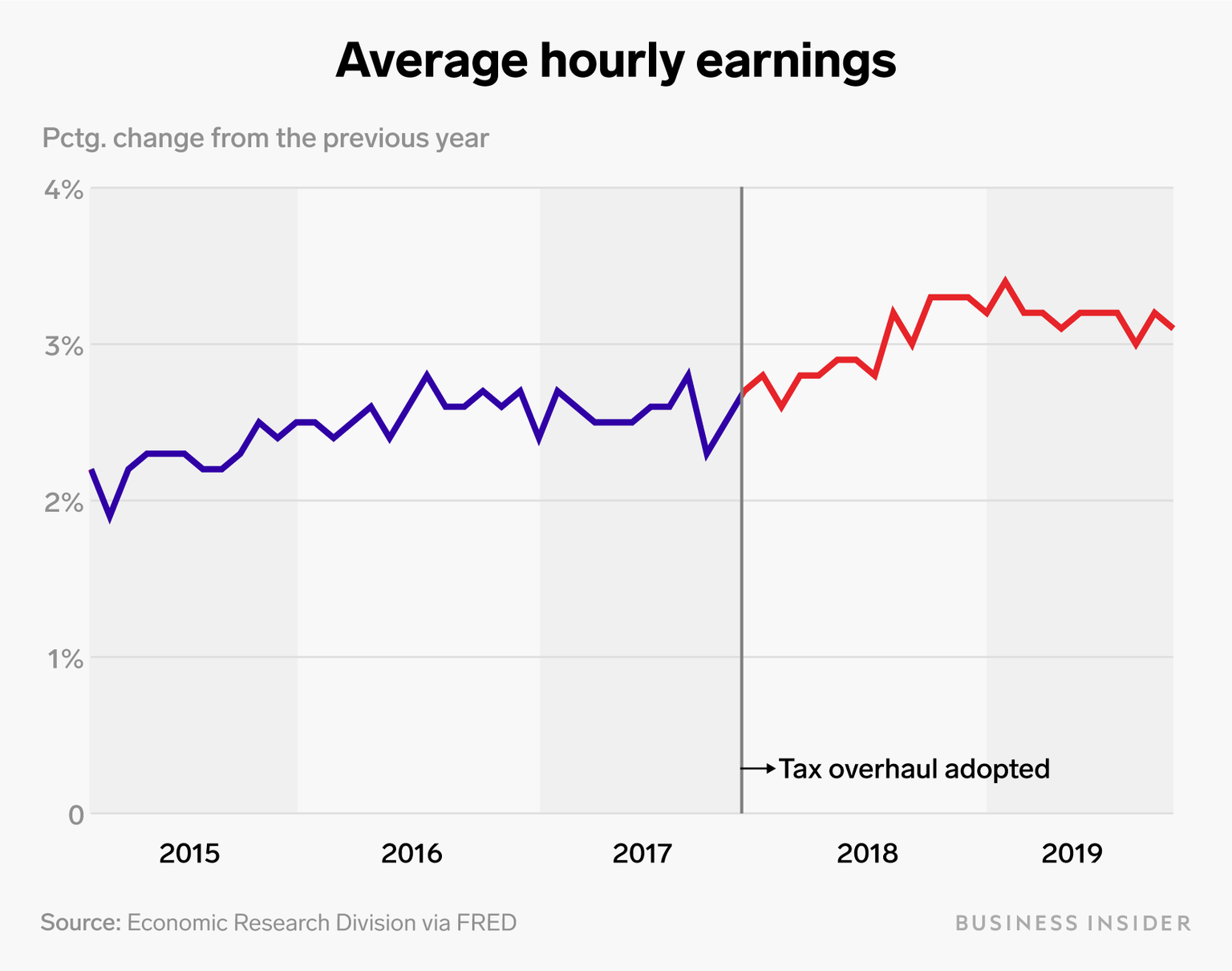 Trump tried championing the law as a boost to the middle class, saying that average household incomes would increase by at least $4,000 a year. Many economists said the promise was very unlikely to pan out, given companies could easily access additional capital cheaply to shore up operations.

The White House later pointed to the rise of average hourly pay as a sign of the law’s success.

But it hasn’t edged substantially upward since December 2017, hovering between 2.8% and 3.6% up until now.

One estimate from Macroeconomic Advisors, an economic research firm, found that average hourly growth would have to reach 7.8% this year to reach the $4,000 income boost for US households. It only stood over 3.3%, the firm said.

Consumer confidence fluctuated through 2019 â and the tax cuts had little to do with it. 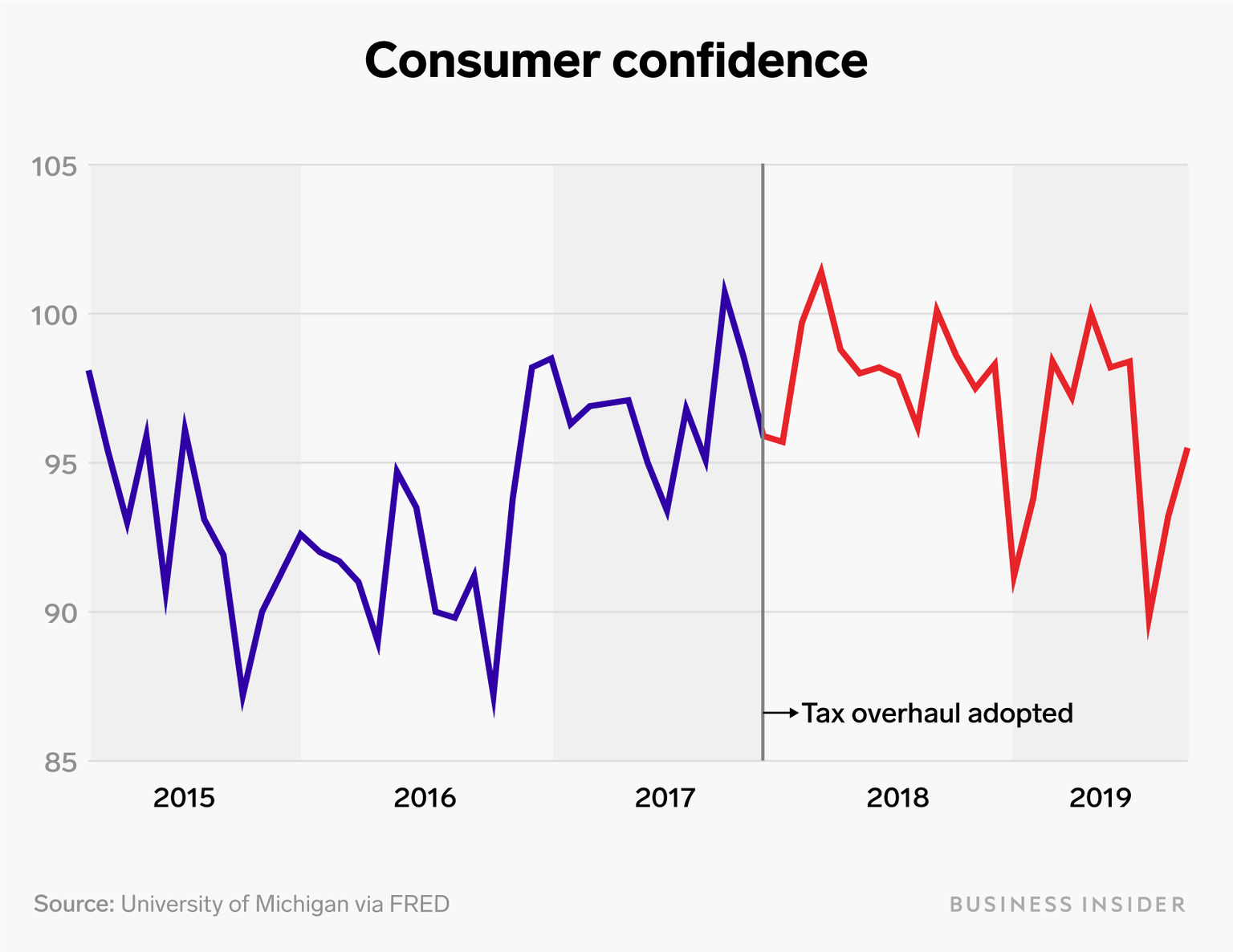 Consumer confidence has fluctuated alongside the country’s economic performance over the last two years, edging upward in early 2018. The Republican tax cuts, though, have polled poorly with the public since then.

The majority of taxpayers did receive a cut, though it was very small and surveys showed most Americans didn’t notice it in their take-home pay or tax bills. That suggests the law had a limited impact shaping voter’s views on the health of the economy.

Other factors, like global trade war fears, have weighed more on US consumers recently.

Capital spending has steadily decreased in the last two years, mainly the product of uncertainty of Trump’s ongoing trade wars. 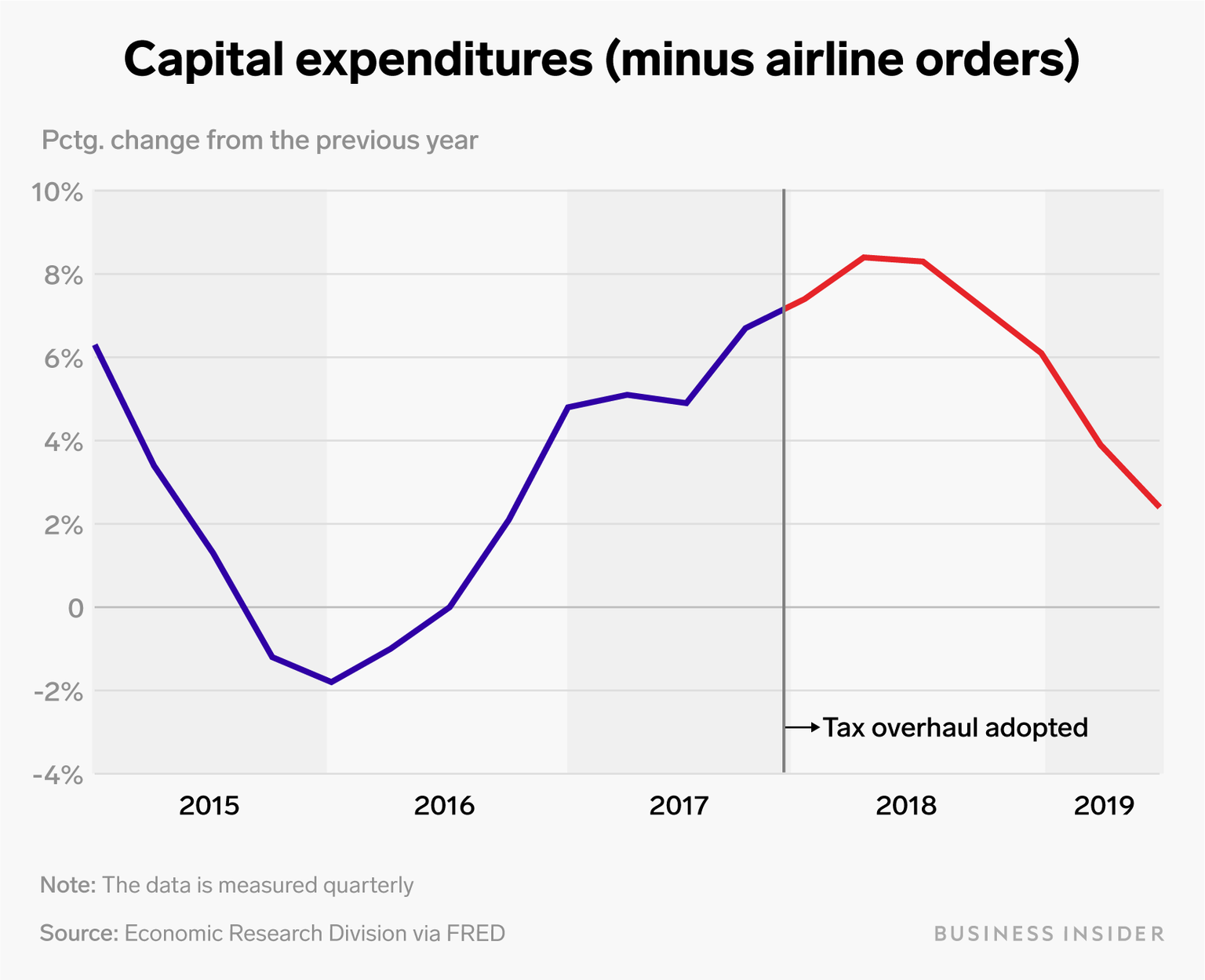 Capital expenditures refers to investments that businesses make in new equipment, buildings, and technology that they use to expand and improve existing operations.

There was an initial jump after the tax bill was passed, but it faded through 2018. It took a hit as lower oil prices and Trump’s trade war with China injected uncertainty into the global economy.

The International Monetary Fund found in an analysis of Fortune 500 companies that only 20% of increased revenue was spent on capital expenditures – the other 80% went to investors through buybacks or dividends among other asset adjustments.

The tax cuts didn’t reverse the decline in manufacturing activity. 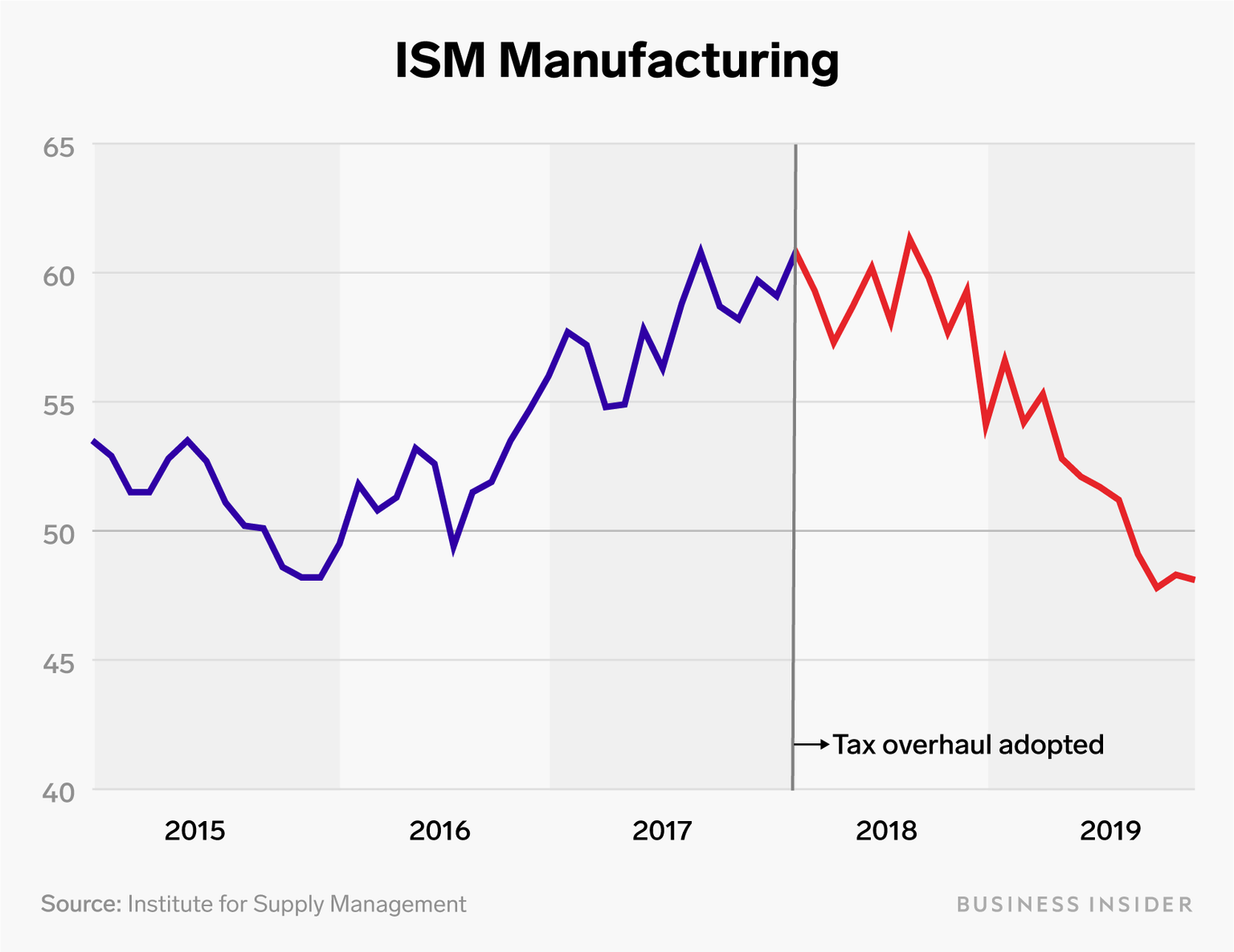 The manufacturing index measures production levels each month and it’s considered a key indicator of the US economy’s broader health. Readings below 50 indicate a contraction of activity.

While the GOP tax cuts jolted the sector and helped create manufacturing jobs – averaging 20,000 a month in 2018, the highest in three decades – it didn’t reverse a downward trend in this index.

Domestic producers suffered a brutal hit with the ongoing trade war with China and slowing global growth. Major corporations like General Motors posted record revenues but continued laying off workers in their factories.

The latest ISM measure for November stood at 48.1, the fourth straight month of a reading below 50 that signals contraction. It reflects continued weakness in new orders and exports.

Stock buybacks, however, set records in 2018, the first full year of the Trump tax law â and they’re higher than before the law was enacted. 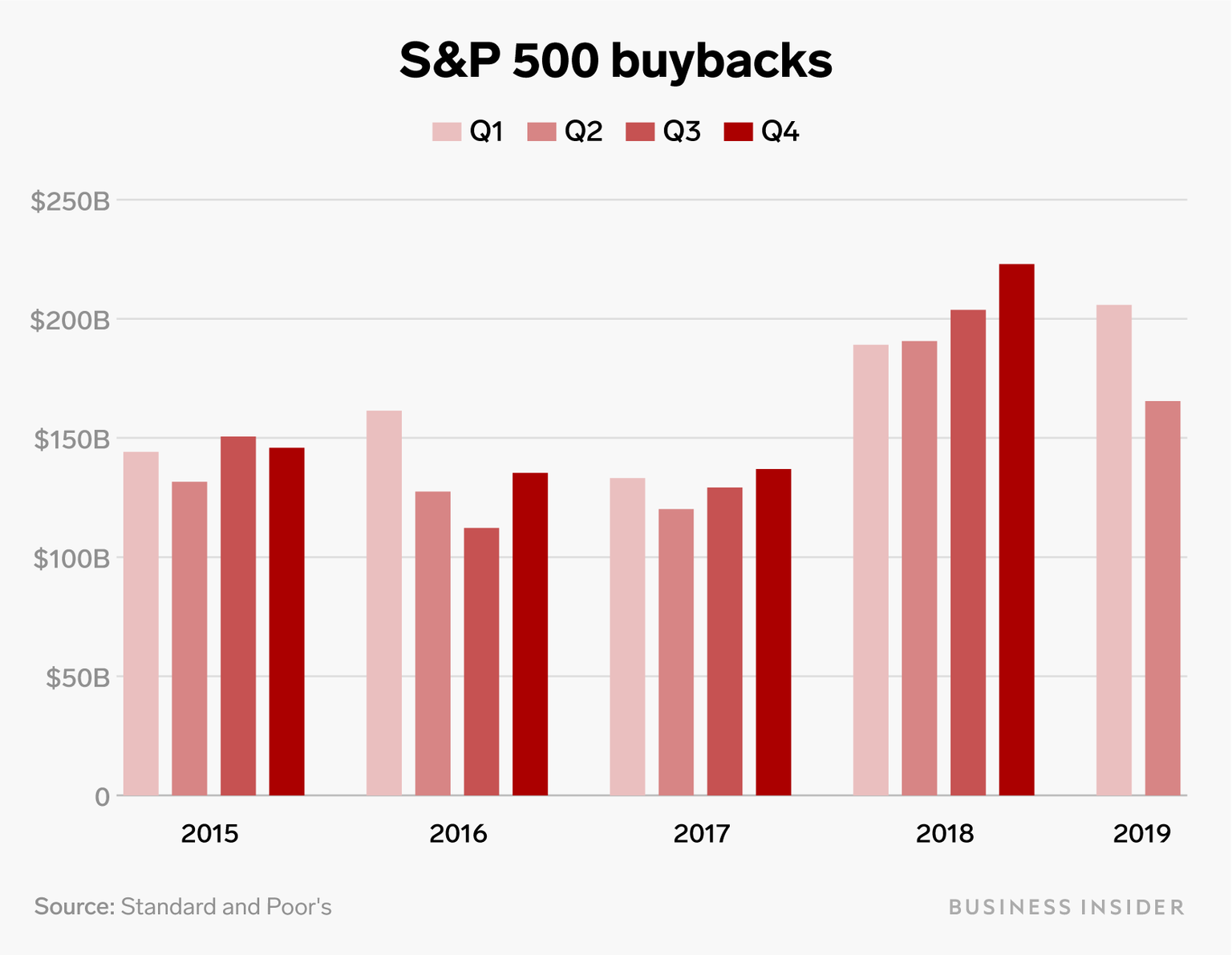 Buybacks reduce the number of shares a company has on the market, which jacks up their stock price to the benefit of stockholders and corporate executives.

Corporations were some of the most enthusiastic supporters of the 2017 tax cuts. And it’s easy to see why: they reaped most of the law’s rewards.

Last year, the nation’s largest 500 companies invested far more into buying back stock than they did to expand operations with their tax savings. Buybacks surpassed a record $1 trillion in 2018, 50% more than the prior year.

In 2019, however, global economic uncertainty pushed the number of buybacks downward. Goldman Sachs estimated that the total amount of buybacks would slide down to $710 billion.

A 6-year-old girl found a disturbing hand-written note in a Christmas card that claimed foreign prisoners were being forced to work in China
I’ve been switching between Apple’s standard AirPods and the AirPods Pro, and there’s only 1 reason you should consider buying the more expensive version (AAPL)