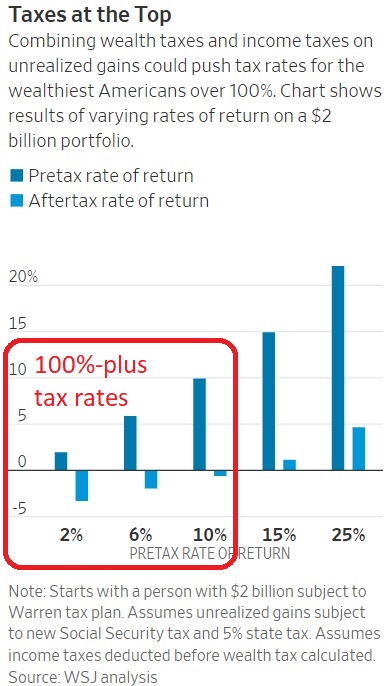 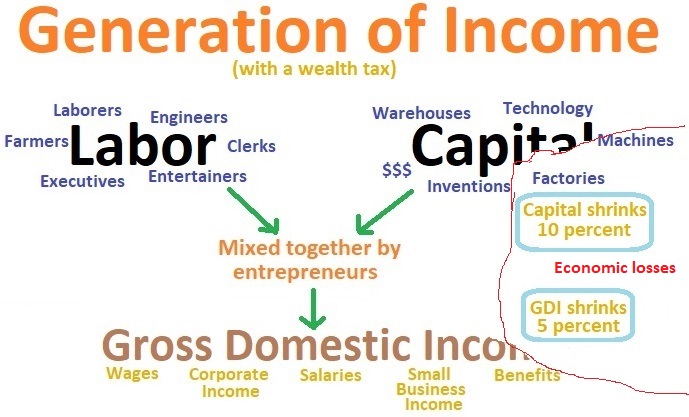 I don’t like higher taxes, whether looking at levies on income, capital gains, payroll, death, or consumption. But if asked to identify the worst way of hiking taxes, the wealth tax might lead the list because of the economic damage caused per dollar collected.

If you don’t want to spend two minutes watching the video, which is excerpted from an online debate organized by my left-leaning friends at TaxCOOP, everything I said can be boiled down to the following four points.

I first addressed the issue back in 2012 and 2014, but I’m now writing more often about the wealth tax because it’s evolved from being a bad idea to being a real threat.

Joe Biden didn’t include a wealth tax in his class-warfare campaign manifesto, but Bernie Sanders and Elizabeth Warren both pushed for the idea. And there are plenty of other Democrats in Congress who also support this punitive levy.

So let’s add to our arguments.

In a report for the Manhattan Institute, Allison Schrager and Beth Akers summarize why a wealth tax is misguided.

Wealth taxes are inefficient and ineffective because wealth is inherently more difficult to measure. Privately held companies, for example, are not traded in public markets, which means that there are no stock prices by which one can objectively gauge their value. Also, financial assets can be hidden or moved abroad with the click of a mouse or converted into other assets that are hard to value.

A dozen European countries had a wealth tax in 1990, but most abandoned them because they were ineffective and expensive to administer. In part, the taxes failed to raise much revenue because wealthy individuals easily moved their assets across borders to avoid taxation. …Wealth taxes distort behavior in a way that is harmful to economic growth and national prosperity. By taking a fraction of people’s wealth each year, the tax reduces the return to investing and discourages saving. This can reduce growth because investing and capital accumulation are critical to innovation. …think of it as a tax on capital income. And when you put the tax in income terms, 2% can be enormous. For example, if your assets return 4%, a 2% wealth tax is equivalent to a 50% tax on capital income!

The temptation to adopt a wealth tax will grow in the aftermath of record budget deficits resulting from the pandemic-induced recession. …However, the case for a wealth tax rests on questionable or unfounded assumptions. …Proponents argue that wealth taxes generate substantial net revenues… However, Europe’s experiment with wealth taxes yielded little revenue. …wealth taxes raised only 1.0 percent of GDP in Spain and Switzerland, 0.4 percent in Norway, and 0.2 percent in France in 2017, not enough to significantly affect either government finances or wealth distribution.

As a result, most European nations abandoned wealth taxes years ago. …A wealth tax is rife with administrative problems because it creates the incentive to minimize reported wealth. …Besides, taxpayers can easily circumvent a wealth tax. Canada’s former Prime Minister Jean Chretien warned that “there is nothing more nervous than a million dollars — it moves very fast, and it doesn’t speak any language.” …Compounding the mobility of capital is the willingness of people to move to avoid or minimize taxes. One study of estate taxes found that 21.4 percent of the 400 richest Americans moved from states levying an estate tax to a state without one, while only 1.2 percent did the reverse. …A wealth tax also distorts economic incentives, encouraging consumption while penalizing the savings and investments that foster higher long-term growth. This is especially true when wealth taxes are layered on top of taxes on the capital income that wealth generates.

Even folks who might otherwise be sympathetic are throwing cold water on the idea of a wealth tax.

In a column for Bloomberg, Ferdinando Giugliano points out that it would be foolish to impose big taxes on coronavirus-weakened economies.

…I can see why a government would want to introduce a one-off levy on the rich after an extraordinary shock such as a pandemic or a war. …The main problem right now is that it’s too soon to be talking about a wealth tax. …A wealth tax would simply depress spending at a time of shrinking economic output. …There will be a time for redistribution. But…governments must focus on…growth now — and come back to that wealth tax later.

Mr. Giugliano is wrong, of course, to imply or think that there’s ever a good time for a wealth tax.

And he’s also wrong to make the Keynesian argument (that a wealth tax would depress spending), when the correct argument is that it would depress savings and investment, which then leads to foregone wages and lower living standards.

But I wanted to cite his column largely to give me an excuse to criticize the International Monetary Fund.

It galls me that a bunch of bureaucrats recommend tax increases on the rest of us – particularly since they are not only lavishly compensated, but also because they get tax-free salaries.