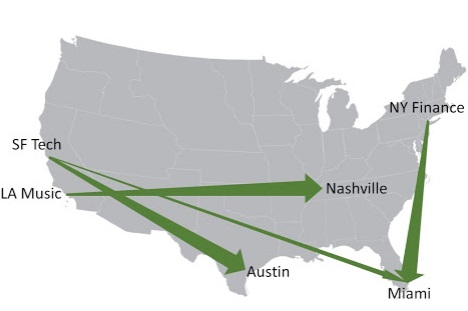 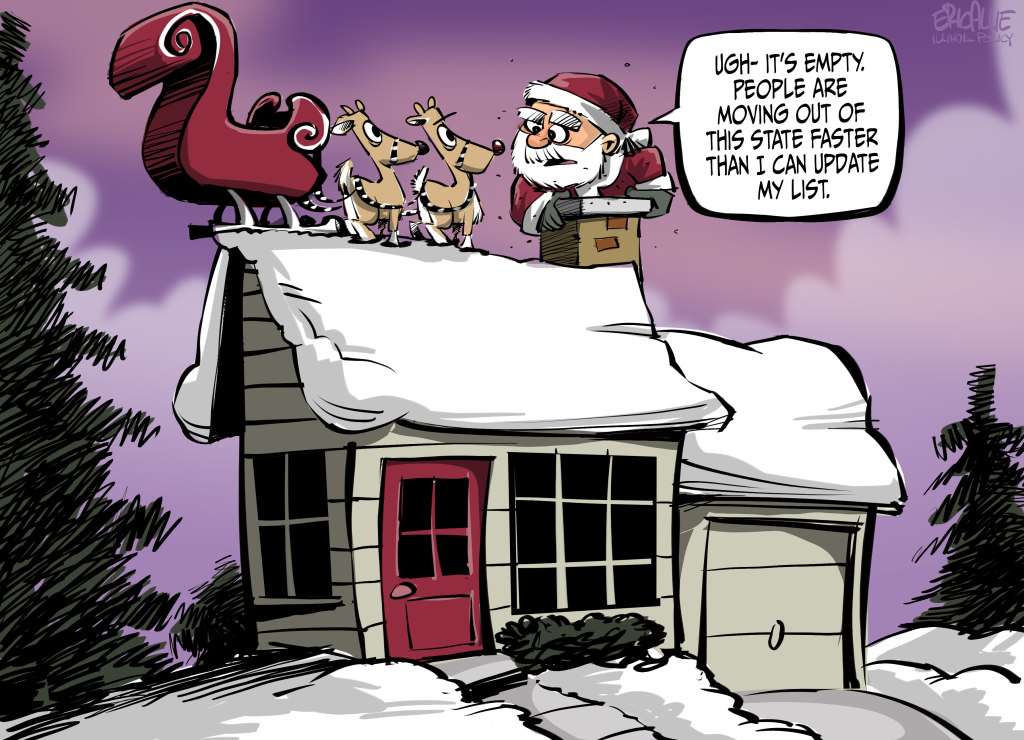 If you ask normal people about the biggest thing that happened in 2020, they’ll probably pick coronavirus, though some might say the 2020 election.

But if you ask a policy wonk, you may get a different answer. Especially if we’re allowed to tweak the question a bit and contemplate the most under-appreciated development of 2020.

In which case, my answer would be interstate tax migration.

I’ve been writing about this topic for years, but it seems that there’s been an acceleration. And, as illustrated by this map, people are moving from high-tax states to low-tax states.

The map comes from an article by Scott Sumner of the Mercatus Center, and here’s some of his analysis.

The movement of these industries is toward three states that have one thing in common—no state income tax. …Progressives often discount the supply side effects of tax changes, pointing to examples such as Kansas where tax cuts had little effect. But Kansas…tax cuts were relatively modest. If you are looking for a low tax state on the Great Plains, South Dakota has no state income tax at all. The top rate in Kansas (5.7%) is higher than in Massachusetts (5.0%).

That won’t get the job done. …I’m certainly not a rabid supply sider who thinks that tax rates are all important. But a person would have to be pretty blind to ignore the migration of firms from places like New York, New Jersey and California, to lower tax places. …Washington State has no income tax, which is unique for a northern state with a big city. Washington is also home to the two of the three richest people on the planet (the other–Elon Musk–just announced he’s moving from California to Texas.) …Washington is also experiencing rapid population growth, which is also unique for a northern state with a big city. …last year more that half of the US population growth occurred in just two states—Texas and Florida. …Add in Tennessee and Washington and you are at nearly two thirds of the nation’s population growth.

Wow, four states (all with no income tax) accounted for the bulk of America’s population growth. That’s a non-trivial factoid.

And I also think his observations about Kansas are spot on. Yes, the state improved it’s tax system, but it should have been bolder, like North Carolina.

…the state of Illinois has been a laggard in population growth. It has lost eight congressional districts since the 1950s. But new census estimates show that this decade, something very special has happened. …the land of Lincoln has lost a net 308,000 residents over the last seven years…

And Illinois’s rapid shrinkage is occurring even as the United States grew by nearly 7% since the last census. …Illinois is not alone. The same census data point to two other big states that are also driving away residents with similarly impractical, ideologically leftist policies ⁠— California and New York. …New York, as a consequence, has also lost about 42,000 residents in the last decade. Its population peaked in 2015, and in the time since, it has lost about 320,000. A similar phenomenon is occurring in California, …with about 70,000 net residents vanishing in 2020. …residents are actually giving up and abandoning its beautiful, scenic inhabited areas. …the same census numbers show that people are gravitating toward states that have low or no income tax.

The mess in jurisdictions such as New York, California, Illinois, New Jersey, and Connecticut is so severe that I wasn’t sure how to vote in the first-to-bankruptcy poll.

And a recent editorial in the Wall Street Journal echoed these findings.

California’s population shrank for the first time as far back as records go (-69,532). According to a separate state government survey, a net 261,000 residents moved to other states during the period…many large businesses are shifting workforces to other states.

…Last year Charles Schwab announced it is relocating its corporate headquarters to the Dallas region from San Francisco. Apple is building a new campus in Austin. Facebook this fall bought REI’s headquarters outside of Seattle. Oracle and Hewlett Packard Enterprise recently announced relocations to Texas. …Over the last decade, Illinois has lost 243,102 in population, about the size of Peoria and Naperville combined. …Democratic states in the Northeast last year lost population, led by New York (-126,355), Connecticut (-9,016) and New Jersey (-8,887). …By raising taxes again and again to pay for generous collective-bargained benefits, public unions are making Democratic states less competitive.

The final sentence is the above excerpt is especially insightful.

Among the states facing fiscal challenges, a common theme is that politicians and bureaucrats have a very cozy and corrupt relationship resulting in absurdly lavish (and unaffordable) compensation levels.

Let’s close with a bit of humor from the great cartoonist, Eric Allie. With all the interstate migration that happened last year, no wonder Santa Claus had some problems.

P.P.S. Even though it would be a massive tax cut for the rich, Democrats want to restore the state and local tax deduction. Even if they are successful, though, I suspect that change would only slow down the decline of blue states.