In Part I of this series, I pointed out that Biden’s plethora of proposed handouts and subsidies would lead to higher prices and more inefficiency. And in Part II, I explained that his discussion of inflation was embarrassingly inaccurate.

In today’s column, we’re going to analyze his strident support for protectionist “Buy America” provisions, which drive up costs for taxpayers by making it harder for foreign firms to compete for government contracts and thus give American firms the ability to charge higher prices.

How much of a burden are these policies? How much more are taxpayers having to pay because governments can’t opt for the lowest qualified bidder?

According to research shared by the Peterson Institute for International Economics (PIIE), American taxpayers lose $94 billion per year. 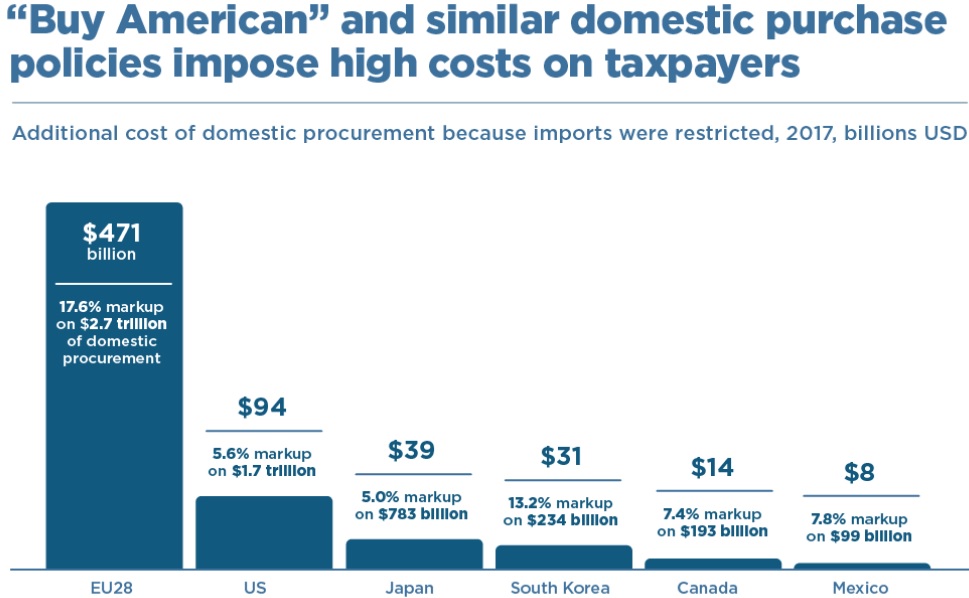 The good news (if we have a very generous definition of “good”) is that procurement protectionism “only” pushes up costs in the United States by 5.6 percent.

Our dirigiste friends in the European Union suffer much more. Their procurement protectionism results in average markups of 17.6 percent, costing European taxpayers a staggering $471 billion.

But taxpayers are not the only losers.

In a 2017 study for PIIE, Gary Hufbauer and Euijin Jung explain that nations also lose exports because of procurement protectionism.

Buy American provisions are often enacted because politicians associate the patriotic slogan with the creation of domestic jobs. In fact, these laws are counterproductive: They are costly for taxpayers, they curtail exports, and they lose more jobs than they create. “Buy American” was bad policy in 1930 and does even more harm today. …Buy American dulls competition for everything that federal, state, and local governments purchase.

Consequently, taxpayers pay inflated prices for new infrastructure, the latest information technology, and routine maintenance of subways, bridges, and airports. …Quantification is difficult, but the major federal Buy American laws probably equate to tariff equivalent barriers of at least 25 percent on federal purchases. State laws vary in scope and protective degree, but on average they probably entail at least 10 percent tariff equivalent barriers. …When Buy American policies are championed at home they are emulated abroad—in the form of Buy European, Buy Mexican, Buy Japanese, and other local content laws and policies. Consequently, US goods and services face severe barriers in foreign procurement markets. …US exports could expand by $189 billion annually if OECD countries all repealed their existing local content laws.

The Heritage Foundation’s Tori Smith authored a report when Trump was pushing his version of procurement protectionism. Here’s some of what she wrote.

Domestic content requirements, like those found in the Buy American Act, the Berry Amendment, and various other laws, result in additional regulatory burdens for producers, and increase costs for American taxpayers.

All for little or no gain: The policies are unlikely to stimulate job growth in target industries. …Existing laws and provisions regarding domestic content requirements…are extremely onerous and complicated burdens. They have three main effects: (1) creating additional regulatory hurdles for producers; (2) costing American taxpayers more than they would otherwise pay for government projects; and (3) they are unlikely to yield job growth in target industries like the steel sector.

Here are the most important passages from her report.

…to eliminate all existing domestic content requirements….would create hundreds of thousands of American jobs across the country and contribute billions of dollars to U.S. gross domestic product.

And this chart shows how various states would benefit if there was open competition for government procurement. 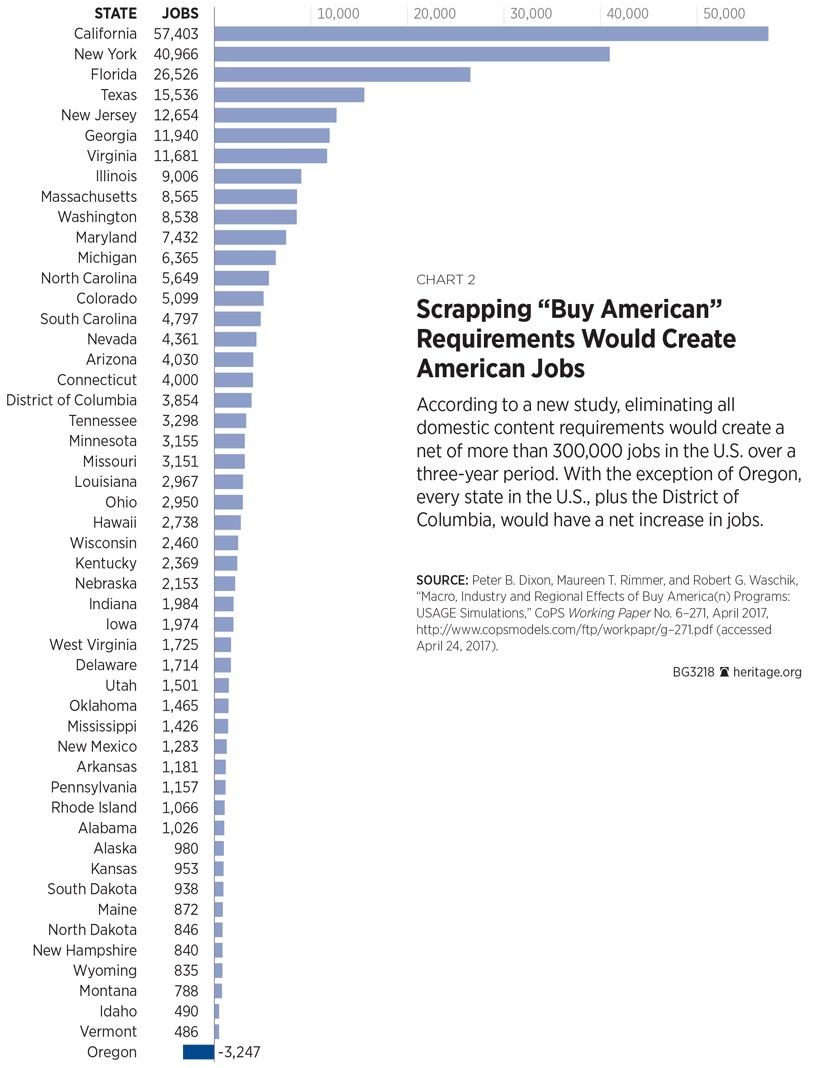 First, it’s disappointing that Biden is continuing Trump’s protectionist policies. It’s even more disappointing that he wants to expand upon them. This is one area where people thought Biden might move policy in the right direction.

For some historical perspective on the failure of the Trump-Biden approach, the National Taxpayers Union helpfully shared the views of Harry Truman and Dwight Eisenhower.

Second, some national security experts make a very reasonable argument that the Pentagon should not make itself dependent on purchases from nations such as China.

Third, Biden is perversely consistent. Everything he is doing will increase costs for taxpayers and consumers in order to bestow undeserved benefits on special-interest groups.

P.S. The argument for competition in the market for government procurement is the same as the general argument for free trade. And since we’re on the topic of trade, remember that dollars sent overseas as part of a procurement contract will come back to the United States, either to purchase American exports or as part of investment in the U.S. economy.

P.P.S. None of this changes the fact that the public sector should be much smaller. In a libertarian society, there would be far lower levels of government procurement.

IAEA Director General Grossi’s Initiative to Travel to Ukraine
This California City’s Attempt to Charge People for Driving Back-Fired. Here’s Why That Matters for Everyone