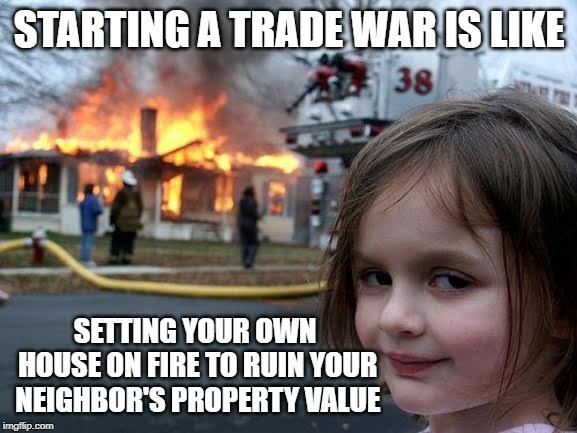 Way back in 2010, I explained that Paul Krugman was wrong to think that wars were good for the economy.

Indeed, he was more wrong than usual. The additional spending for the military isn’t “stimulus,” so his usual Keynesian argument was misguided.

Today we are going to look at how war can teach us another economic lesson.

The United States and other major nations have responded to Russia’s assault on Ukraine by imposing trade restrictions with Russia.

If protectionists are correct, these steps (effectively imposing an extreme Russian version of Biden’s “buy America” policy) should strengthen Putin.

Yet that’s obviously not the purpose of the sanctions.

Instead, officials from western nations understand that these trade barriers will weaken Russia’s economy.

By the way, this isn’t the only example of nations using trade restrictions to hurt their enemies.

The U.S. trade embargo with Cuba is a prominent example, and there are also restrictions on trade with Venezuela.

And don’t forget the British navy’s blockade against France during the Napoleonic wars.

So why, then, do politicians like Donald Trump and Joe Biden support imposing the same policies on the United States?

P.S. Imposing sanctions on Russia is not good for the U.S. economy (or the European economies, the Japanese economy, etc), but such policies are strategically sensible if the damage on the Russian economy is much greater.

P.P.S. There is now discussion about kicking Russia out of the World Trade Organization. Once again, the purpose would be to hurt Russia’s economy. Which should raise uncomfortable questions for people who think the United States would benefit by choosing to give up membership.

Hundreds Of People Who’ve Had Abortions Tell Biden: ‘We Need To Hear From You’
Michelle Steel & Young Kim, forging a path as the GOP’s only Asian American congresswomen