I repeatedly write about inequality, largely in hopes of helping people, especially my left-leaning friends, understand that we should instead focus on other issues, such as economic opportunity and poverty reduction. In other words, let’s try to help the less fortunate rather than tear down successful people

I specifically try to convince them that they shouldn’t be bothered if someone gets rich (assuming wealth is being earned rather than the result of handouts, bailouts, and subsidies from politicians). What matters is “growing the pie” so all of us have a chance to enjoy more prosperity.

But what if someone gets rich because of good luck? In other words, instead of becoming wealthy because of hard work, intelligence, or entrepreneurship, what if someone is simply the beneficiary of being attractive? Or being tall?

As captured by this tweet from Rob Henderson, this is not mere speculation. 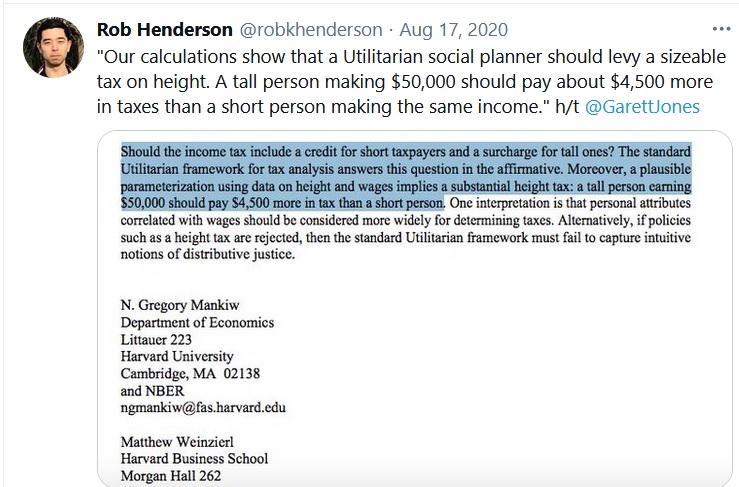 I actually referenced Prof. Mankiw’s work when writing about this issue back in 2010.

And I periodically come across new research on the economic advantages enjoyed by attractive folks.

Highly attractive women’s salaries are one-tenth higher than the average even at similar education and competence levels, a low attractivity means a loss of 4 percent, according to a study presented by sociologist Petra Anyzova at a workshop

based on a job market research project today. …Anyzova said that the results are similar to the findings of other studies and the trend suggests that men are disadvantaged if they display more feminine traits and women are disadvantages if they display more masculine traits.In the case of men, the impact of physical attractiveness on being able to secure a higher socio-economic status is significant.

And here’s another study Henderson tweeted about. 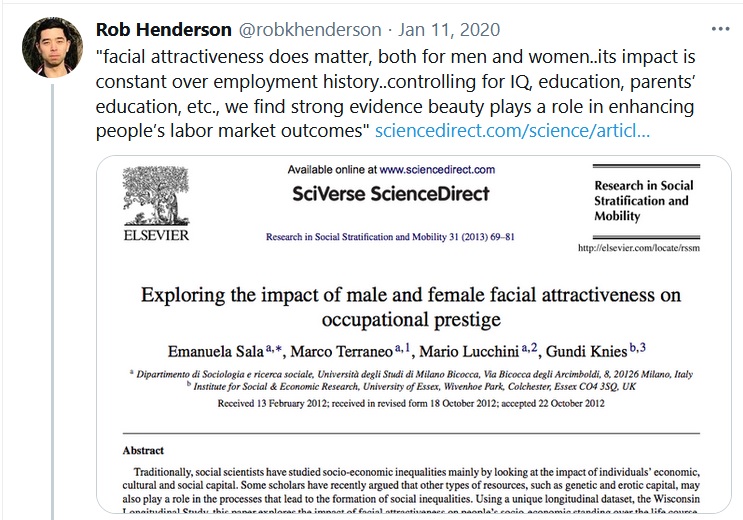 So what are the policy implications of this research? And the other research that I cited back in 2018 and 2019?

As far as I’m concerned, there aren’t any.

Yes, some people are very lucky because of their looks or their height and they wind up with extra income because of those random characteristics, but that shouldn’t be a reason for government-coerced redistribution.

The same thing is true for those fortunate enough to be born into the right families.

As I wrote two years ago.

…taller people and better-looking people earn more money and have better lives. That’s genuine unfairness, just like having better parents is a source of genuine unfairness. Yet not even Bernie Sanders or AOC have proposed taxes to equalize those sources of real unfairness.

But government intervention isn’t the answer, as I explained back in 2011.

The real issue is whether this discrimination is real and whether it justifies government intervention. …I don’t doubt that “lookism” exists. …But does that mean we should have some sort of government bureaucracy with the power to sue, fine, arrest, or otherwise harass based on whether people claim they didn’t get promotions because of their appearance?

Just imagine, for instance, if government tried to redistribute sexual opportunities, as suggested by this example of Elizabeth Warren satire?

I’ll conclude with the observation that if we don’t try to address inequalities caused by random luck, such as looks and height, then why would we want politicians to impose taxes and redistribution to deal with inequalities that are the result of attributes over which we have considerable control, such as diligence, productivity, responsibility, and effort?

P.S. For what it’s worth, research suggests conservatives generally are viewed as more attractive and stronger than folks on the left (though that research also suggests that libertarians generally are perceived as being dorks).