The economics of taxation is simple. The more you tax of something, the less you get of it.

The morality of taxation, by contrast, is more challenging. At least for me.

I’m not an anarcho-capitalist, so I can’t unilaterally declare that all taxes are evil and unjustified. 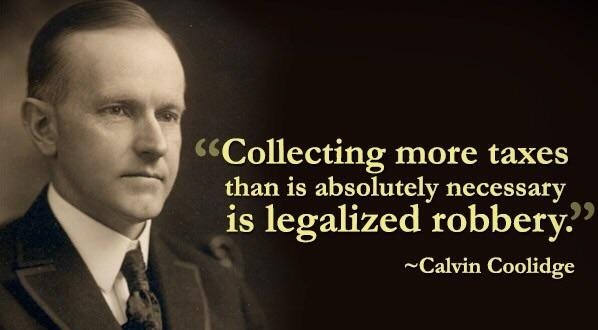 And I’m definitely not a statist who thinks all of our incomes belong to the government.

At the risk of oversimplifying matters, I agree with Calvin Coolidge.

Regarding morality, there’s another issue that’s worth discussing.

Consider this story from Governing.

Across the country, states that are flush with cash are cutting taxes on income, sales and Social Security benefits.

…But good times never last forever. Some fiscal experts are worried that states are setting themselves up for a fall. …“I see this as a temporary increase in revenues that we’re likely going to see dry up in the next year or two,” says Kim Rueben, director of the State and Local Finance Initiative at the Urban-Brookings Tax Policy Center.

What’s galling about the story is that the focus is on whether governments can do without extra revenue.

But what about taxpayers? You know, the people who have to earn and produce before politicians can seize and squander?

That’s why I very much appreciate a recent column in the Washington Post by former Indiana Governor Mitch Daniels.

A newspaper account early this year reported on pending legislation that would “slash billions of dollars worth of taxes” in my home state of Indiana. The article was more interesting for its word choices than for its content.

Twice, it stated that the proposal would “cost the state” money. Twice, it warned that the state would “lose out” on large sums. …The article simply showed the implicit biases now thoroughly ingrained across what these days is referred to as the corporate press. …property in a free society belongs not to the state but to its people, and it should be expropriated by the state only for truly necessary purposes, in truly necessary amounts. It’s more than just a matter of money, because every act of taxation imposes a diminution of freedom.

Kudos to Daniels for channeling Coolidge.

The bottom line is that taxes diminish freedom. Politicians should never take our money unless proposed spending is for the general welfare – as defined by the Founding Fathers and as authorized by the Constitution.

Now that we’ve discussed the economics of taxation and the morality of taxation, here’s a final observation about the math of taxation.

Tax cuts are not a “cost” to government, they’re a “savings” to taxpayers. This is why provisions in the tax code that allow taxpayers to keep more of their money should not be referred to as “tax expenditures.” Even if they are bad policy.

P.S. By modern political standards, Mitch Daniels is on the right side. But that doesn’t mean he is a poster boy for libertarianism. At one point, he flirted with the notion of a value-added tax, so I was happy when he decided against a presidential race. He also presided over irresponsible spending increases when he was head of the Office of Management and Budget for President George W. Bush.