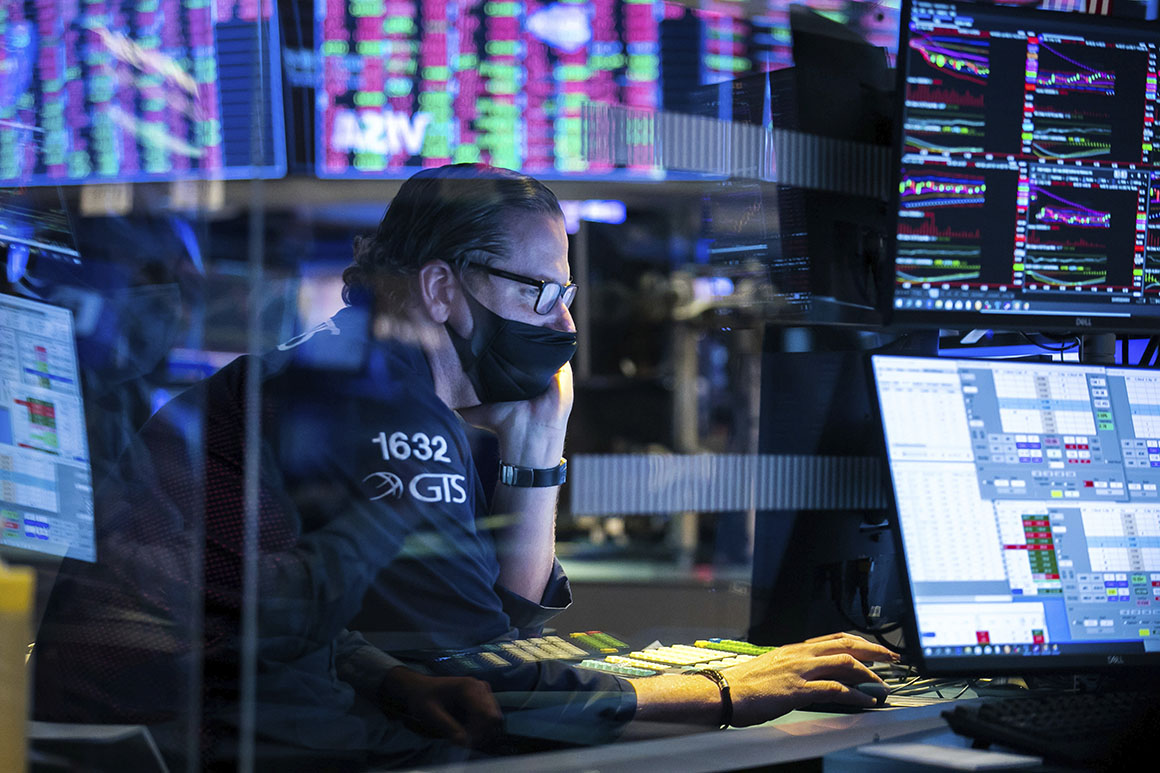 NEW YORK (AP) — Stocks fell sharply Friday, with the Dow Jones Industrial Average briefly falling more than 1,000 points, as a new coronavirus variant first detected in South Africa appeared to be spreading across the globe. It added to investor uncertainty about potentially reversing months of progress at getting the Covid-19 pandemic under control.

The S&P 500 was down 2.3%, on pace for its worst day since February. Airlines and other travel stocks sank as health officials in Europe and the U.K. moved quickly to propose suspending air travel from southern Africa. The price of oil fell more than 13% amid worries of another slowdown in the global economy.

“Investors are likely to shoot first and ask questions later until more is known,” Jeffrey Halley of Oanda said in a report. That was evident from the action in the bond market, where the yield on the 10-year Treasury note fell to 1.51% from 1.64% on Wednesday. As a result, banks took some of the heaviest losses. JPMorgan Chase dropped 4%.

There have been other variants of the coronavirus — the delta variant devastated much of the U.S. throughout the summer — and investors, public officials and the general public are jittery about any new variant that’s spreading. It’s been nearly two years since Covid-19 emerged, killing more than 5 million people around the globe so far.

Health officials in Europe and the U.K. moved quickly to propose suspending air travel from southern Africa. Meanwhile cases of the variant were found in Hong Kong, Belgium and Tel Aviv as well as major South African cities like Johannesburg.

The economic impacts of this variant are already being felt. Flights between South Africa and Europe were being subject to quarantine or being shut down altogether. Airline stocks were quickly sold off, with Delta Air Lines, United Airlines and American Airlines falling more than 10% each.

A sign of how fearful Wall Street has become was the VIX, the market’s measurement of volatility that is sometimes referred to as the market’s “fear gauge.” The VIX jumped 49% to a reading of 27.75, its highest reading since January before the vaccines began to be widely distributed.

Fearful of more lockdowns and travel bans, investors moved money into companies that largely benefited from previous waves, like Zoom Communications for meetings or Peloton for at-home exercise equipment. Peloton shares were up 4% while Zoom was up roughly 9%.

Shares in the coronavirus vaccine manufacturers were among the biggest gainers as well. Pfizer shares rose nearly 5% while Moderna shares jumped 23%.

Merck shares were down 4%, however. While U.S. health officials said Merck’s experimental treatment of Covid-19 was effective, data showed the pill was not as effective at keeping patients out of the hospital as originally thought in the data.

Investors are worried that the supply chain issues that have impacted global markets for months will worsen. Ports and freight yards are vulnerable and could be shut by new, localized outbreaks.

“Supply chains are already stretched,” said Neil Shearing, an economist with Capital Economics in London. “A new, more dangerous, virus wave could cause some workers to temporarily exit the workforce, and deter others from returning, making current labor shortages worse.’’

Stock trading the Friday after Thanksgiving is typically the slowest day of the year, with the market closing at 1 p.m. Eastern. The light trading could exacerbate any of Friday’s losses with fewer buyers and sellers.

Trump Could Pay $156,000 For Every Jan. 6 Rioter’s Defense, But So Far Has Spent Zero
Women in STEM: Enhancing the Nuclear Safety Culture