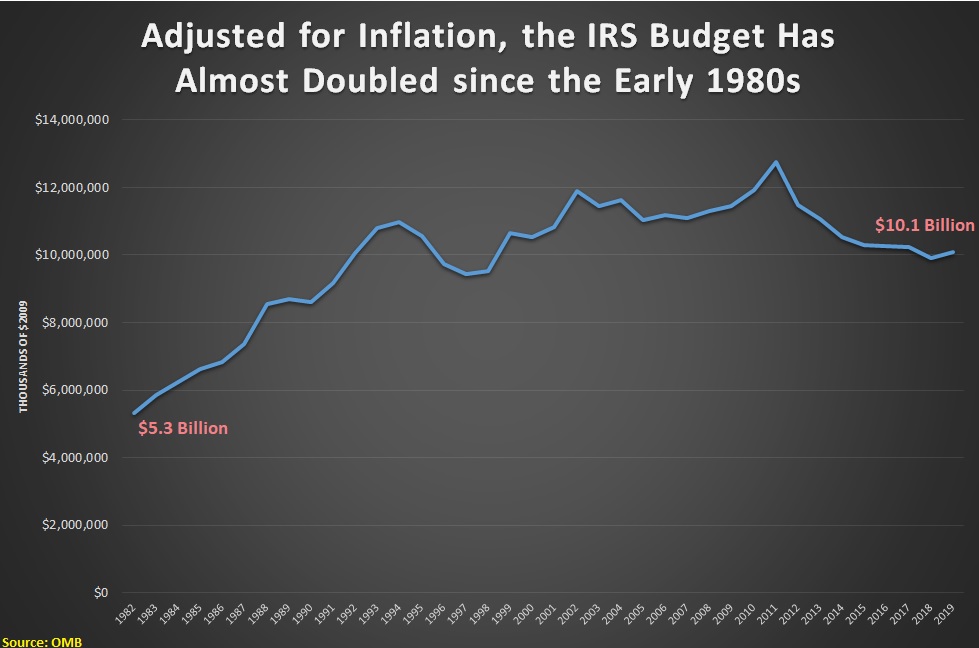 April 15 is usually the worst day of the year, giving Americans ample reasons to both laugh and cry.*

Because of a holiday in Washington, D.C., however, tax returns this year are due on April 18.

So let’s celebrate (or commiserate) this awful day by wading into the debate about whether the Internal Revenue Service should have a bigger budget.

Proponents usually claim the IRS is under-funded by comparing today’s budget to how much the bureaucracy received in 2011.

But that was a one-year spike because of all the money in Obama’s failed stimulus package. If you review long-run data, you can see that the IRS’s budget has increased significantly.

And these numbers are adjusted for inflation.

But perhaps proponents are right, even if they use deceptive numbers.

The Washington Post has a new editorial on this topic, arguing that the bureaucracy needs more money.

The IRS is currently limping along without enough staff or funding. Congress, especially Republicans, needs to face up to reality. …It’s not a mystery how the IRS deteriorated.

…the core problem is that Republicans slashed the IRS budget about 18 percent in the past decade. That’s not belt-tightening, it’s gutting an agency. …The Biden administration is rightly asking for a big increase for 2023 (a request of $14.1 billion). This isn’t some Democratic wish list item; it’s about restoring the basic functions of America’s tax collection agency.

When this topic was being debated last year, Ryan Ellis explained that the IRS will target small businesses if it gets a bigger budget.

Here are some excerpts from his piece in National Review.

…the idea is that if taxpayers fund the IRS to the tune of $40 billion over the next decade, the IRS will step up audits and collect an additional $100 billion in tax revenue, penalties, and interest. This is lauded as a good because of the supposed “tax gap,”…

Apparently, it doesn’t occur to anyone that the IRS, which is seeking this extra $40 billion in taxpayer funding, has every incentive in the world to exaggerate this “tax gap” and to make wild promises about the new money that additional enforcement will yield for the Treasury. …Giving money to IRS bureaucrats to conduct fishing expedition audits on millions of honest self-employed people? The same IRS behind the Lois Lerner scandal a decade ago, when the IRS inappropriately targeted conservative political groups during the 2012 election season, when Obama was running for reelection?

Ryan is right to point out that the IRS is undeserving because of bad behavior.

He mentions the Lois Lerner/Tea Party scandal. I think the recent leak of taxpayer data is equally reprehensible.

Advocates of more funding will argue that the bureaucracy’s malfeasance is a separate issue and that more employees and more audits are needed regardless of whether criminals at the IRS are caught and punished.

But this brings us to another important topic, which is whether it would be best to fix the underlying tax laws instead of throwing more money at the IRS.

In a column for the Louisville Courier-Times, we get this point of view from Richard Williams of George Mason University’s Mercatus Center.

…money won’t fix this problem. …Another approach would be drastically reducing the complexity of federal taxes.

…The Tax Foundation estimates that we give up 3.24 billion hours and $37 billion to comply with federal taxes each year. Given the headaches and anxiety that come with this, Americans don’t need more IRS workers. We need a leaner agency…individual filers and small businesses represent a huge proportion of the public who would gain from simplification. …There is no need to hire more people to oversee a reformed system. What’s not to like?

When proponents say the IRS needs more money, they implicitly are arguing for the current, convoluted tax system.

They want the IRS to be in the business of collecting revenue. But that’s just one role.

And that’s just a brief list of the things that the IRS now does in addition to generating revenue.

Get rid of these added roles, ideally as part of a total replacement of the tax code with a flat tax, and the discussion would be about how much money could be saved by reducing the IRS’s budget.

But that means less power for politicians, so don’t hold your breath waiting for genuine tax reform.

That being said, supporters of good policy should feel no obligation to help prop up the current system by shoveling more money to the IRS.

P.S. From my archives, here are some examples of the bureaucrats who will benefit from a bigger IRS budget.

P.P.P.S. And since we’re recycling some oldies but goodies, here’s my collection of IRS humor, including a new Obama 1040 form, a death tax cartoon, a list of tax day tips from David Letterman, a cartoon of how GPS would work if operated by the IRS, an IRS-designed pencil sharpener, two Obamacare/IRS cartoons (here and here), a sale on 1040-form toilet paper (a real product), a song about the tax agency, the IRS’s version of the quadratic formula, and (my favorite) a joke about a Rabbi and an IRS agent.

‘I Just Think Sarah These Days Is Not a Person to Be Taken Seriously’
Florida Gov. Ron DeSantis Moves To Strip Disney Of Self-Governing Power