Since I wrote yesterday about Ukraine’s terrible economic policy, fairness requires that I make the same points about Russia’s similarly dirigiste system. 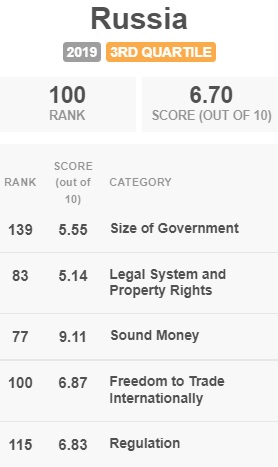 We’ll start with Russia’s scores from the latest edition of Economic Freedom of the World.

Not exactly a good set of numbers, particularly with regards to “size of government.” And it’s safe to assume that Russia’s overall score will decline when a new version is released later this year.

But I want to make the point that Russia faced serious economic problems well before Putin decided to invade Ukraine.

Indeed, he may have attacked in part to distract from Russia’s ongoing economic problems.

To some degree, this is a story of weak demographics, as I observed last month.

But Putin is making a bad situation worse.

Consider what George Will wrote for the Washington Post back in 2020.

…in Catherine Belton’s exhaustive new book…, “Putin’s People: How the KGB Took Back Russia and Then Took On the West…” says that “by 2012 more than 50 percent of Russia’s [gross domestic product] was under the direct control of the state and businessmen closely linked the Putin.” …state-directed capital allocation actually is crony socialism.

It’s sometimes not easy to measure crony socialism (which technically should be called fascism), but even the International Monetary Fund recognizes its downsides.

Here’s some research from the IMF, authored by Gabriel Di Bella, Oksana Dynnikova, and Slavi Slavov.

The size of the Russian State…economic footprint remains significant. Concretely, the state’s size increased from about 32 percent of GDP in 2012 to 33 percent in 2016,

not far from the EBRD’s estimate of 35 percent for 2005-10. …a deep state footprint is reflected in a relatively high state share in formal sector activity (close to 40 percent) and formal sector employment (about 50 percent). The deep footprint is also reflected in market competition and efficiency. Although sectors in which the state is present are more concentrated, concentration is large even in sectors where the state’s share is low. …Finally, state-owned enterprises’ performance appears weaker than that of privately-owned firms, which may be subtracting from growth.

There’s a thorough discussion of how the oligarchs gained control of key sectors of the economy, as well as this discussion of other policy mistakes.

The 1990s in Russia and throughout most of the former Soviet Union were a time of dizzying change… As price controls were lifted and the money supply increased, inflation exploded. In 1992, Russian inflation was about 2,000 percent, with another 1,000 percent inflation the following year. Life savings disappeared almost overnight.

…plummeting social indicators were all tied to the disastrous performance of the Russian economy, a chaotic mix of large enterprises still under state control, a central government heavily in debt…the “crown jewels” of the former Soviet economy—in sectors such as oil and gas, mining, and steel production—remained under state control. …in GDP per capita, Russia has fallen far behind its fellow former Soviet republics in the Baltic region, with output per person about half of Estonia’s and about 40 percent less than Lithuania’s and Latvia’s. Not coincidentally, the Baltic countries all rank in the top 30 in the world in the Heritage Foundation’s 2021 Index of Economic Freedom.

I’ll wrap up with a story that is particularly disappointing to me.

One of the few good policies Putin implemented was a flat tax.

But rather than build on that successful reform, he decided to reverse it and adopt a system with discriminatory rates. Here are some excerpts from a 2020 report in the Moscow Times.

Russian President Vladimir Putin on Monday signed a law on increasing income tax for high earners in the first move away from a flat tax system in place since 2001.

Starting next year, the tax rate will rise from 13% to 15% on incomes over 5 million rubles (about $65,800/55,370 euros at the current exchange rate). …The reform is expected to give state coffers an additional 60 billion rubles, the president said… The current flat tax system was introduced in 2001 and was among the key reforms of Putin’s first presidential term.

The bottom line is that the yoke of communism has been removed but statism remains.

Which explains why Russia is not converging with the United States, as theory would predict. Here is a chart based on the Maddison database. 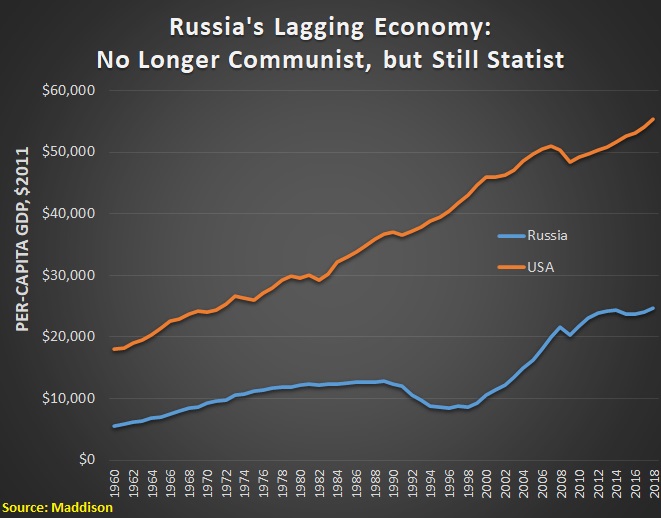 This is quite depressing, especially if the economy’s poor performance gave Putin an extra incentive to “wag the dog” with military aggression.

But let’s end on an optimistic note. It’s possible that Putin has miscalculated and his attack on Ukraine eventually will result in his ouster.

The best-case scenario is that he gets replaced with a free-market reformer. The Russian version of Mart Laar, perhaps. Then Russia could become a success story, which is exactly what we’ve seen in the Baltic nations.