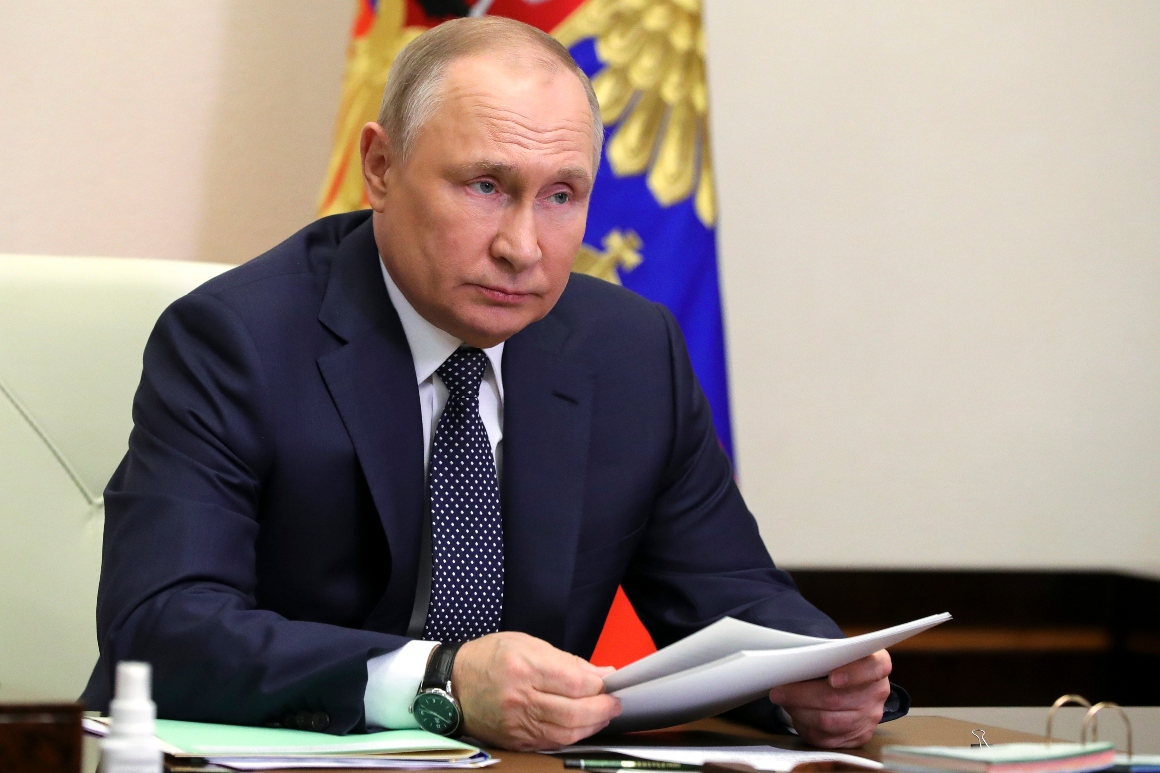 Evidence that Russian troops murdered hundreds of Ukrainian civilians is leading some U.S. lawmakers to insist that America and its allies keep sanctions on Moscow so long as Vladimir Putin remains in power — even if he withdraws from Ukraine.

The sentiment is likely to grow in a Congress where anti-Putin feeling is strong and bipartisan. It could put the White House in a tricky position, making it potentially harder to bring peace to Ukraine by enticing Putin through sanctions relief.

The lawmakers want to punish Putin for what he’s done to Ukraine and innocent civilians in particular, and they recoil at the idea of allowing Russia’s economy to be revived with Putin still in power, in part because they don’t trust him not to re-invade Ukraine later.

“As long as we’re in agreement that Putin is a war criminal, he’s conducting crimes, and obviously his government is complicit all the way down the chain with Putin appointees and loyalists, then, how can we in good conscience lift the sanctions?” asked Rep. Mike Waltz (R-Fla.), who has called for even tougher penalties on Moscow.

Rep. Tom Malinowski (D-N.J.), who served as a top human rights official in the Obama administration, shared similar sentiments online and in an interview. “I can’t imagine returning Russia’s wealth to Putin after what he’s done and while Ukraine lies in ruins,” Malinowski said.

Despite a statement suggesting otherwise from President Joe Biden, his administration insists it’s not seeking regime change in Russia, and for now, it is more focused on raising the pressure, not relieving it. On Wednesday, the administration unveiled new sanctions whose targets included Russian banks and Putin’s daughters.

But White House aides are leery of following Congress’ lead on sanctions, fearful that lawmakers are prone to respond to the political whims of the moment without having to manage the longer-term fallout. Sanctions relief can be a useful instrument in the diplomatic toolkit. And administration officials have signaled — vaguely — that they’re willing to relieve economic pain on the Kremlin if it pulls its troops out of Ukraine.

“The purpose of the sanctions … is not to be there indefinitely. It’s to change Russia’s conduct,” Secretary of State Antony Blinken said on NBC News earlier this month. “And if, as a result of negotiations, the sanctions, the pressure, the support for Ukraine, we achieve just that, then at some point the sanctions will go away.”

But aides are also well aware that lifting penalties on adversarial regimes has, in the past, spurred fierce political backlash at home, such as in the case of Iran, and they are trying to coordinate their Russia-related moves closely with Congress.

The images of dead civilians, some of them in mass graves, that recently emerged from the Kyiv suburb of Bucha have left many lawmakers conflicted as to exactly how the sanctions endgame should play out. Many suspect that more such atrocities will be uncovered as the fight continues.

“Absent the war crimes evidence, I would say ‘Yes, we should be prepared to relieve sanctions if Putin pulls out of Crimea and all of the rest of Ukraine,’” said Sen. Chris Murphy (D-Conn.) who often defends Biden’s policies. Following the Bucha reports, “this question of when to lift sanctions is going to be a very difficult one.”

The administration’s general sense is that it will be a long time before the Ukraine conflict reaches a point where significant sanctions removal is even an option. “Putin does not seem interested in ending the fight despite the devastation that he’s bringing upon his own forces and his own people and economy,” a senior U.S. diplomat told POLITICO.

That being said, many U.S. officials believed that Russia’s superior military would quickly capture most if not all of Ukraine — a prediction that has proven incorrect.

Economic sanctions — a broad term that can mean anything from trade restrictions to freezes on an individual’s financial assets — are in theory designed to shape behavior, analysts and officials say. That logic requires that a person or institution under sanctions needs to know those penalties will be removed if they change their actions. Otherwise, they have little incentive to shift course.

In reality, however, as the United States has grown less willing to use military force and struggled at times with diplomatic efforts, sanctions have become a way to punish or isolate an adversary, even when there’s no sign that they will change their behavior. Countries such as North Korea and Cuba have endured U.S. sanctions for many years without appreciably changing to Washington’s liking.

At the very least, imposing sanctions is a feel-good, symbolic move.

“You’ve got to freakin’ do something sometimes,” said Brian O’Toole, a former Treasury sanctions official.

Looming over the entire sanctions debate are the actions of Putin himself. The Russian autocrat has long believed the United States wants to see him toppled. If he becomes convinced that Washington won’t ease the sanctions so long as he remains in power, he may have even less incentive to withdraw from Ukraine.

Malinowski noted the possibility that Putin may hunker down, but he also pointed out that the Russian leader appears unwilling to withdraw regardless of sanctions pressure. The House member is pushing a bill that would give the U.S. government more authority to seize certain Russian assets and divert them to help rebuild Ukraine.

“We’ll either need to use sanctioned assets directly to help Ukraine, or compel Russia to do so as a condition of easing sanctions,” Malinowski said.

Sanctions relief is not a zero-sum game. Many of the decisions related to it will depend on how well Ukrainians fight back against Russians, not to mention power dynamics in Moscow.

The United States and its allies could lift some sanctions, all at once or in stages, depending on the steps Putin takes to bring an end to the fighting. They could also simultaneously impose new sanctions on Russia to punish it for war crimes or other reasons, as they did on Wednesday.

One major factor to be considered is what Ukrainians want.

If Ukrainian President Volodymyr Zelenskyy decides to agree to a negotiated settlement with Moscow, he may ask that the United States and Europe relieve sanctions as part of that deal. Zelenskyy’s word would go a long way in Washington, where at the moment he has many admirers within both political parties.

But even then, U.S. officials and their counterparts in Europe would likely weigh their own national security interests. Eastern European and Baltic countries that fear Putin’s appetite for their soil, for example, may lobby against a partial or full end to sanctions on Moscow. But Western European countries whose economies rely heavily on Russian energy exports may favor quicker sanctions relief.

The West Wing has noticed that some U.S. lawmakers want to extend the punishments until Putin is deposed, and some in the White House have expressed internal concern that a move by Congress could tie the hands of negotiators or further provoke Putin.

But the prevailing belief is that if the sanctions were an obstacle to a peace deal and Zelenskyy wanted them dropped, the United States and its allies would acquiesce, according to two senior Biden administration officials.

When asked recently if Zelenskyy can negotiate sanctions relief, however, Blinken was noncommittal.

“If [Ukraine] concludes that it can bring this war to an end, stop the death and destruction, and continue to assert its independence and its sovereignty, and ultimately that requires the lifting of sanctions, of course we’re going to look at that,” Blinken told NBC News.

The atrocities in Bucha, not to mention what will likely be more such tragedies uncovered in the future, will make it harder for Zelenskyy to agree to a deal with Russia, predicted O’Toole.

“If everybody is honest with themselves about this, there’s so little chance that there is a real resolution to this with Putin in power,” O’Toole said.

A good deal also will depend on who’s in charge at the White House come the cessation of hostilities; the president has significant authority to impose or remove sanctions through executive actions. But Congress can also pass legislation to bind the president.

The case of Iran is instructive: The United States used sanctions to help push Iran to agree to a 2015 deal that restricted its nuclear program. But Republicans and many Democrats opposed the agreement and the sanctions relief it required. The lawmakers passed legislation giving themselves more power to review such agreements.

The deal is now largely defunct since then-President Donald Trump abandoned it in 2018, but Biden’s efforts to revive the agreement have drawn bipartisan backlash, with lawmakers unhappy with the idea of providing sanctions relief for Iran’s Islamist regime. As a result of the back and forth, international companies have largely refrained from reentering the Iranian market, complicating the calculus of a meaningful end to economic punishment.

Likewise in Russia, hundreds of companies have left the country as the United States, European Union and other governments unveiled their sanctions. As long as Putin stays in power, many of those companies may never return, even if the economic restrictions are lifted. And were Putin somehow to be toppled, or die, there’s no guarantee his successor will be any more acceptable to the West.

For as long as Putin rules, though, the sanctions should remain, some lawmakers say.

“There will be attempts to normalize trade relations again if Russia ends their aggression, but I disagree,” said Rep. John Curtis, a Republican from Utah. “Putin’s government should be treated as a pariah going forward.”

Jonathan Lemire contributed to this report.

Oklahoma House Sends Aggressive Abortion Ban To Governor
A deadlock on Jackson’s SCOTUS nomination? What happens if the committee ties