The Fraser Institute in Canada has released its latest edition of Economic Freedom of the World, an index that measure and ranks nations based on whether they follow pro-growth policy.

Based on the latest available data on key indicators such as taxes, spending, regulation, trade policy, rule of law, and monetary policy, here are the top-20 nations. 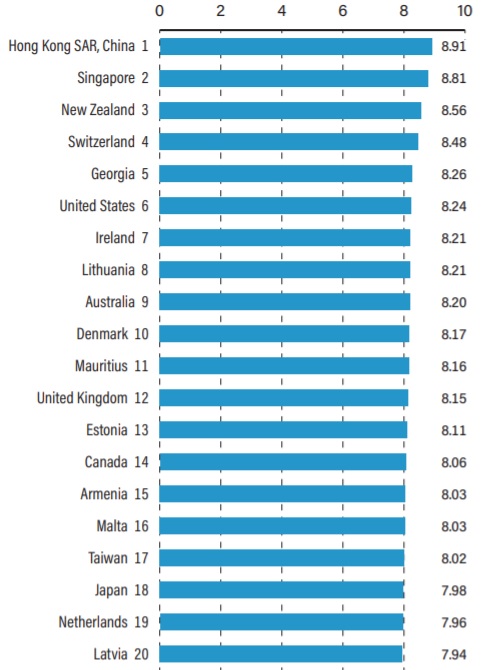 You may be wondering how Hong Kong is still ranked #1.

In this summary of the findings, the authors explain that EFW is based on 2019 data. In other words, before Beijing cracked down. This means Hong Kong will probably not be the most-free jurisdiction when future editions are released.

The most recent comprehensive data available are from 2019. Hong Kong remains in the top position. The apparent increased insecurity of property rights and the weakening of the rule of law

caused by the interventions of the Chinese government during 2020 and 2021 will likely have a negative impact on Hong Kong’s score, especially in Area 2, Legal System and Property Rights, going forward. Singapore, once again, comes in second. The next highest scoring nations are New Zealand, Switzerland, Georgia, United States, Ireland, Lithuania, Australia, and Denmark.

The United States was #6 in last year’s edition and it remains at #6 this year.

There are some other notable changes. The country of Georgia jumped to #5 while Australia dropped to #9.

Perhaps the most discouraging development is that Chile dropped to #29, a very disappointing result (and perhaps a harbinger of further decline in the nation that used to be known as the Latin Tiger).

And it’s also bad news that Canada has deteriorated over the past five years, dropping from #6 to #14.

The good news is that the world, on average, is slowly but surely moving in the right direction. Not as rapidly as it did during the era of the “Washington Consensus,” but progress nonetheless. 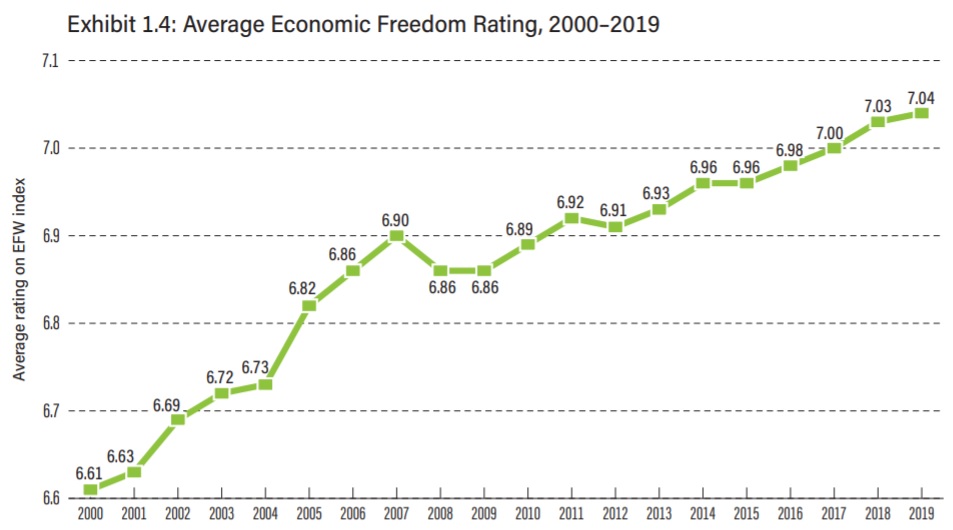 By the way, the progress is almost entirely a consequence of better policy in developing nations, especially the countries that escaped the tyranny of Soviet communism.

Policy has drifted in the wrong direction, by contrast, in the United States and Western Europe.

Indeed, the United States currently would be ranked #3 if it still enjoyed the level of economic liberty that existed in 2000.

In other words, the Bush–Obama–Trump years have been somewhat disappointing.

Let’s look at another chart from the report. I’ve previously pointed out that there’s a strong relationship between economic freedom and national prosperity. 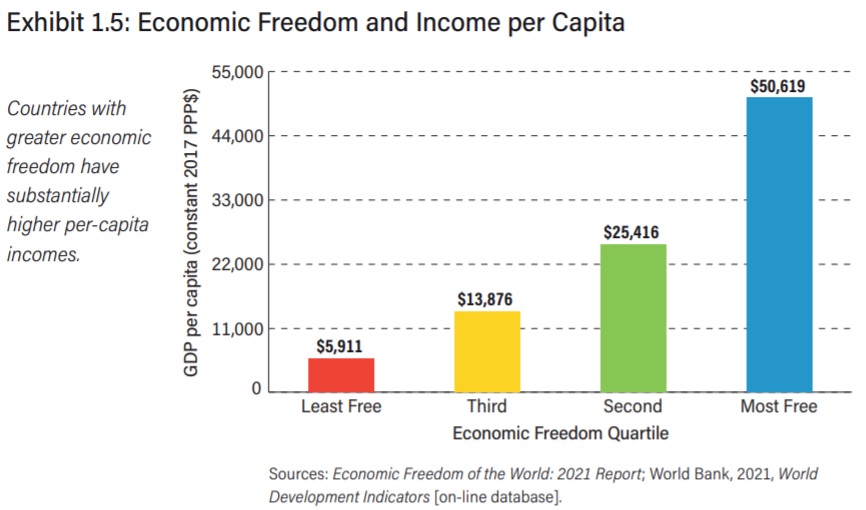 Let’s close by considering some of the nations represented by the red bar in the above chart.

You probably won’t be surprised to learn that Venezuela is once again ranked last. Though it is noteworthy that its score dropped from 3.31 to 2.83. I guess Maduro and the other socialists in Venezuela have a motto, “when you’re in a hole, keep digging.”

Argentina isn’t quite as bad as Venezuela, but I also think it’s remarkable that its score dropped from 5.88 to 5.50. That’s a big drop from a nation that already has a bad score.

Given these developments (as well as what’s happening in Chile), it’s not easy to be optimistic about Latin America.

P.S. There isn’t enough reliable data to rank Cuba and North Korea, so it’s quite likely that Venezuela doesn’t actually have the world’s most-oppressive economic policies.

Beyond the Lab Coat: From Materials Science to Programme Management
Biden and Pelosi’s Tax Plan Will Penalize Success