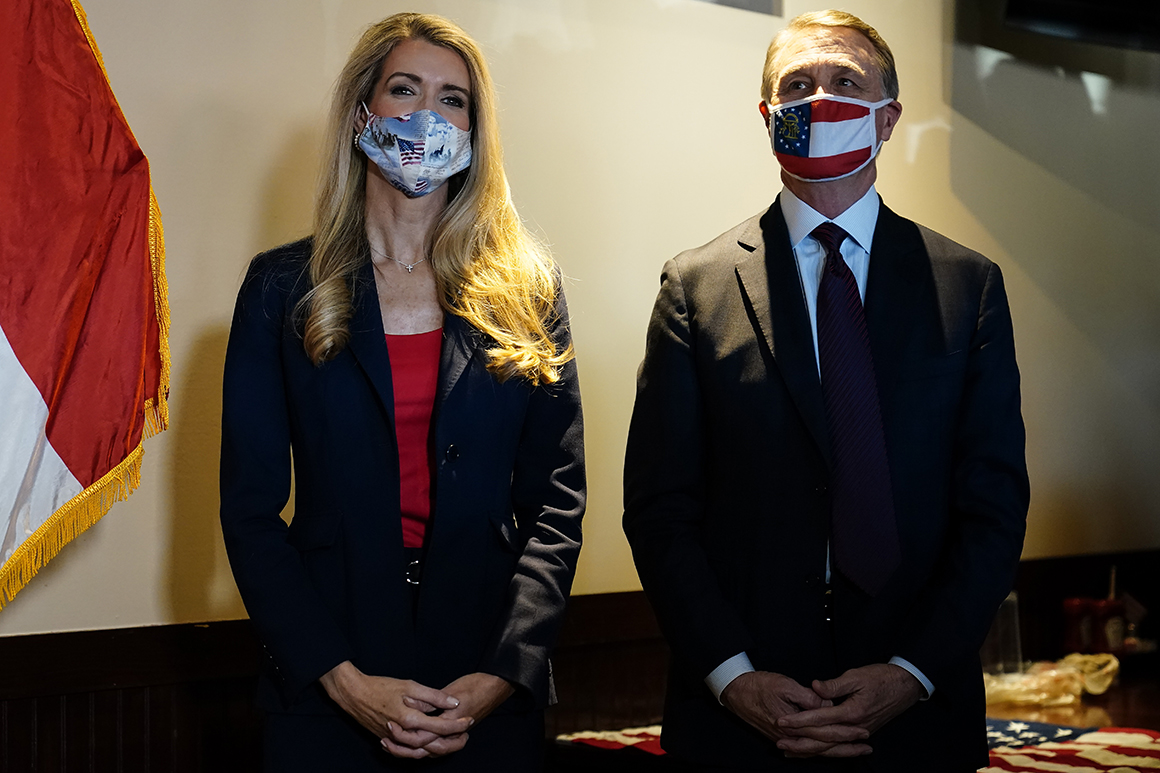 The price tag for the Georgia Senate runoffs has already cleared $100 million — and it’s climbing fast.

Top super PACs and Senate committees from both parties have laid down tens of millions of dollars combined in initial advertising buys for the two runoff races, which will decide control of the Senate. It’s only a small fraction of what the groups will ultimately spend between now and Jan. 5, since each party’s top super PACs has bought only a week of TV ads so far.

Meanwhile, each of the four campaigns have already booked anywhere from $20 million to $40 million on TV, and total spending is already nearing $150 million. The enormous sums could easily match the advertising budget for a full cycle for many competitive Senate races, and yet the figures will likely continue to grow in the coming days and weeks as the campaigns scrap for every dollar — including both GOP senators soliciting donations during interviews on Fox News Channel on Wednesday.

One Republican working on the runoffs predicted the two races combined could top $500 million in total spending, which would put them firmly in top tier of most expensive Senate races in history, even when excluding everything spent before Nov. 3.

During a campaign event last week with appointed GOP Sen. Kelly Loeffler (R-Ga.), who is running in the special election, Sen. Marco Rubio (R-Fla.) joked that Georgia TV stations are “going to make a lot of money over the next few weeks.”

“This is literally the showdown of all showdowns in terms of politics and what it means,” said Rubio.

In the regular race — which is for a full, six-year term — GOP Sen. David Perdue ($24 million) and Democrat Jon Ossoff ($32 million) have combined to book $56 million in ads on their own, according to AdImpact.

But those otherworldly totals are eclipsed by what the candidates in the special election — which is for the final two years of former Sen. Johnny Isakson’s term and will be up again in the 2022 midterm election — are spending. Democrat Raphael Warnock has reserved $25.5 million in TV ads, according to AdImpact. Loeffler has already booked $40 million in TV ads for the race.

Loeffler mostly self-funded her campaign for the November election, loaning or donating more than $23 million of her own cash for the race, in which she finished second. But Stephen Lawson, a campaign spokesman, said Loeffler — whose net worth is in the hundreds of millions — does not plan to spend her own funds for the runoff.

“We know that hundreds of millions of dark liberal money is pouring into our state. That’s why it’s so important that everyone across the country get involved,” Loeffler said Wednesday on the cable-news channel, sharing her campaign website and asking people to “chip in five or 10 bucks” to her campaign.

The comments drew swift condemnation from Democrats because Loeffler was interviewed inside the Capitol, and soliciting donations inside federal buildings is prohibited by Senate ethics rules.

"If we win Georgia, we save America. Frankly, that’s why I need your viewers to help us," Perdue said, listing his website and asking viewers to "chip in a few bucks to help us."

That’s not the only way Republicans are tapping into their Fox-watching base for campaign cash. Ad ad from Senate Georgia Battleground Fund, the joint fundraising committee between Perdue, Loeffler and the National Republican Senatorial Committee, launched a national Fox News Channel ad purely to solicit new donations to the fund.

“If Democrats win the two runoff elections in Georgia, Republicans lose control of the Senate. This means radical liberal policies like the Green New Deal, Medicare for All and defunding our police could become reality,” Majority Leader Mitch McConnell says in a voiceover, with the website for the fund on screen throughout the ad. 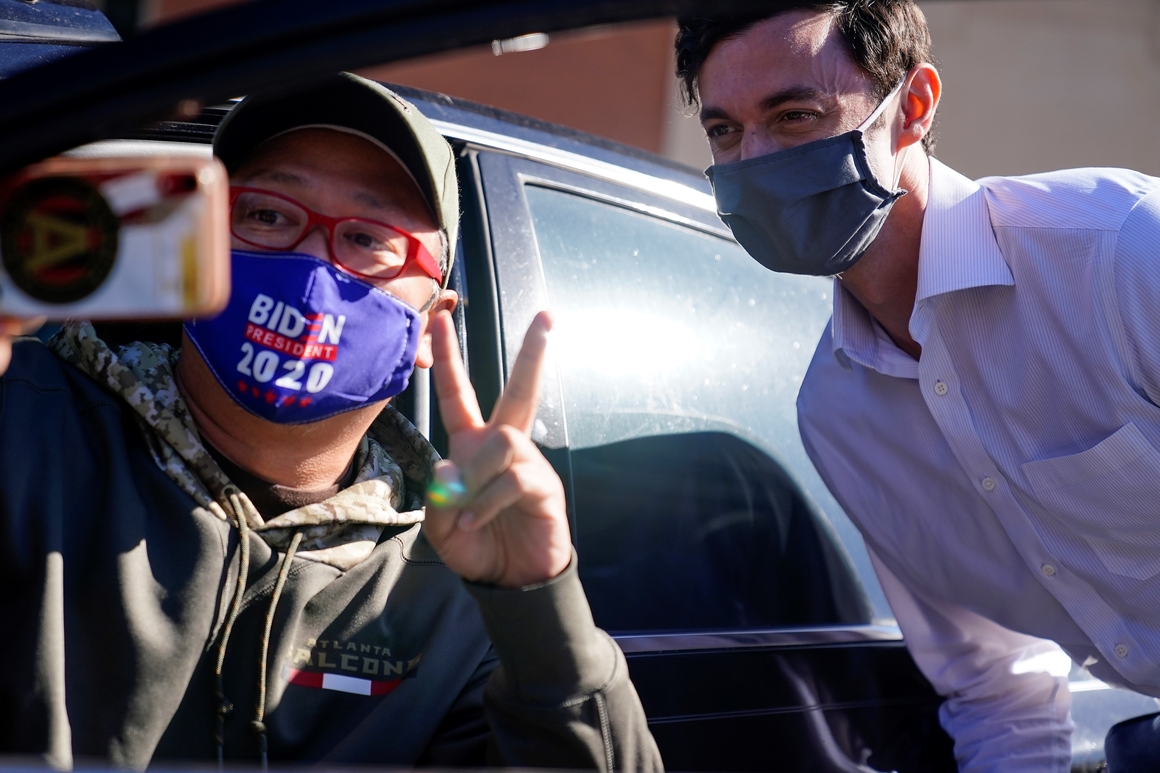 The National Republican Senatorial Committee booked $1.7 million for TV ads in each race starting the first week in December. The committee is also running coordinated ads with both campaigns, according to AdImpact.

The Democratic Senatorial Campaign Committee made a $6 million initial reservation for the final three weeks of the runoffs, split between the two races. That ad blitz is on top of the multi-million investment the committee announced in field and ground organizing.

All of these totals represent TV spending — the largest line item on a campaign’s budget — and are only a partial picture of how pricey these races will be.

But they do reflect the parties’ main arguments. Republicans’ early messaging is clear: portray Warnock and Ossoff as radicals. Loeffler’s initial ads last week attacked Warnock over past comments he’s made about police or controversial Rev. Jerimiah Wright, an early effort to define him after he faced little negative advertising during the general election.

Warnock has mostly run positive ads about his own biography, as he did in the run-up to his first-place finish earlier this month. But he also countered with an ad attacking Loeffler over stock trades made during the pandemic.

And two outside groups have picked up that theme against both Loeffler and Perdue. Georgia Honor and The Georgia Way — both of which are affiliated with Senate Majority PAC, the top Democratic super PAC run by allies of Minority Leader Chuck Schumer — ran separate ads attacking Perdue and Loeffler for stock trades made at the outset of the pandemic, and accusing them of downplaying the virus. The initial investment from the super PACs was $5 million.

Their counterparts, American Crossroads and Senate Leadership Fund, which are run by McConnell’s allies, made an initial $9 million investment this week, launching ads accusing Ossoff of covering up a “trail of dirty money” and calling Warnock a “radical” funded by the “far left.”

Perdue’s sole TV ad so far tied Ossoff to national Democrats like Schumer and Nancy Pelosi, using Schumer’s comments about wanting to “change America” as a warning of a liberal agenda if Democrats take the majority.

Ossoff called the early attack ads from Republicans “out of touch” in a Zoom press conference with reporters this week.

“People are about to spend Thanksgiving without family. This virus is spreading without control,” Ossoff said. “Thousands of Georgians have lost loved ones. Thousands more may die. The sort of over the top partisan invective, I think, is ineffective and irrelevant."

Ossoff’s messages have focused on Covid recovery and leaned heavily on Biden’s victory in the state and what a Democratic Senate would mean for the incoming administration. He released a minute-long spot Wednesday thanking first responders, and pledging to work with Biden on recovery. That followed a 30-second ad in which Ossoff said the only way to beat the virus was to “give our new president the chance to succeed.”

‘We’re Literally Fighting For Our Lives.’ A New Political Movement Emerges Outside Puerto Rico’s Two-Party System
‘People Will Stop Believing in the Process.’ Why Donald Trump’s Legal Strategy Is Dangerous Even If It’s Likely to Fail