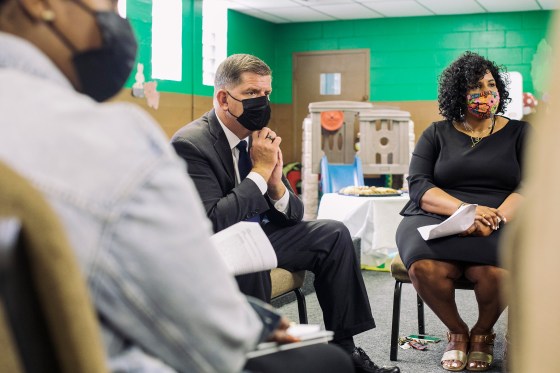 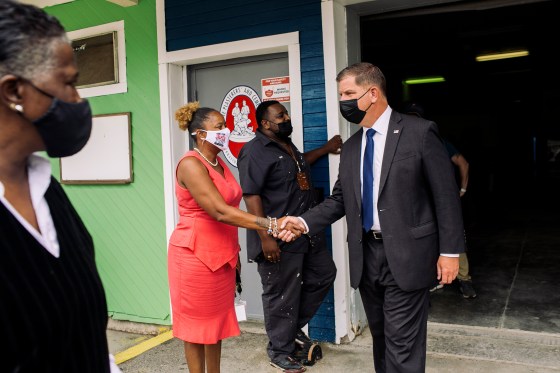 Having an exceptionally productive month at work could ruin Chloe Morgan. A single mother to four boys under the age of ten, Morgan is a saleswoman in Dayton, Ohio, with a $30,000 base salary that is supplemented by a commission. Too big of a bonus would risk her family losing food stamps, Medicaid, and—worst of all—the daycare subsidy that allows her to go to work in the first place. “If I make anywhere between $35,000 and $55,000, I’m in a ‘too-much, but not enough’ situation,” she says. Doing too well at her job could leave her unable to afford childcare.
[time-brightcove not-tgx=”true”]

So on a humid day in mid-August, she arrives at an early childhood center to advocate for a different system. Here, Labor Secretary Marty Walsh is hosting a roundtable for roughly a dozen working-class parents, educators and community leaders who have endured a difficult 18 months. The American economy is rebounding from the once-in-a-century pandemic, but that’s not the complete picture. From February 2020 and February 2021, employment among low-wage workers decreased 11.7%, versus losses of 5.4% among middle-wage workers, while high-wage workers saw their employment rate increase by 1%, according to data analyzed by Pew Research Center. The national unemployment rate, Walsh’s department reported Sept. 3, was still more than 1.5 percentage points higher than it was before the pandemic struck.

As the COVID-19 delta variant surges and pandemic-relief benefits near their expiration dates, Walsh sees an opportunity. He argues that the uneven economic recovery unfolding from coast to coast isn’t just a chance to bring the labor market back to its pre-pandemic baseline, but a political opening to revolutionize conditions for workers going forward. “It’s a once-in-a-generation opportunity that’s in front of us,” he says at the daycare. The question for real people like Morgan is whether Walsh, a plain-spoken former mayor, can deliver on that political promise.

Dayton is the 33rd city Walsh has visited in four months promoting the Biden Administration’s labor plans. Top of the agenda: the Administration’s efforts to enact a national 12-week paid family leave policy and a sliding-scale child care system where no family pays more than 7% of their income for care. At visits to job training centers in Oregon and Pennsylvania and at car racing tracks in Indiana, he touts apprenticeship programs that can create new pathways to the middle class; markets widespread vaccinations as an economic fix as well as a public health obligation; and discusses strategies for modern unions to grow their ranks.

But the most sweeping changes to the country’s social safety net ultimately require congressional approval, and in a 50-50 split Senate, Democrats would require buy-in from 10 Republicans to pass most legislation. Democrats in the chamber seem eager to push temporary versions of some of these measures through the process of budget reconciliation, which would need only a simple majority. But there’s no room for error. Taking that route, they can’t lose a single vote from moderate members of their party who are skittish about President Joe Biden’s expansive spending. A spokesperson for one of the most moderate Democrats, Sen. Kyrsten Sinema, was explicit about the Arizona lawmaker’s hesitance to overspend: “She will not support a budget reconciliation bill that costs $3.5 trillion,” the aide said in late August.

That explains why Walsh is trying to convince Americans that unprecedented investments in workers would help the economy rather than further hamstring it. He argues the soon-to-expire extra $300 weekly unemployment supplement the federal government made available to states during the pandemic isn’t what’s keeping low-income laborers home. “Every day, by every reporter, I get asked the same thing: Why aren’t people coming back to work? Is it the $300? I don’t think it’s the $300,” Walsh says. “I think it’s the lack of childcare, schools being closed and fear of COVID-19.”

Walsh, who served as the mayor of Boston, Mass. for seven years before Biden offered him the top Labor post in January, isn’t the most polished politician in the Administration.

Members of his security detail are wearing less-wrinkled suits than the charcoal one the 54-year-old Labor chief is sporting. New to Beltway politics, the Secretary hasn’t quite mastered the buzzwords and abbreviations often used to describe the progressive agenda he’s touting. In Dayton, he refers to “the President’s Cares Economy,” seeming to conflate the $2.2 trillion CARES Act that brought Americans their first stimulus check in March 2020 with the so-called “care economy” that would provide things like paid leave and affordable childcare. Later in the day, he is momentarily stumped by the acronym “BIPOC”—which stands for Black, Indigenous and People of Color—in response to a question from TIME about racial disparities in unemployment rates.

But if Walsh lacks the traditional trimmings of a cabinet secretary, it may make him more appealing to the average American he was appointed to serve. Walsh is not a graduate of an elite law school or the son of a late Supreme Court Justice like his Labor Secretary predecessor, Eugene Scalia. Rather he’s the offspring of blue-collar Irish immigrants, a survivor of childhood cancer and a recovered alcoholic who dropped out of college before earning a Bachelor’s degree from Boston College in his 40s. “It’s nice to see real people representing us,” says Morgan, the Ohio mom. “I didn’t know that he was like us. But what I did see was that he listened.”

Walsh is also the first union-card-holding Labor Secretary in more than 40 years, and two weeks after the childcare roundtable, he hosts a virtual forum on Facebook Live with workers involved in union organizing campaigns. His induction into the labor movement began when he was a kid around the dinner table in Dorchester, Mass., Walsh says. “The kitchen I grew up in, we were always talking about the labor movement—the importance of fighting for working conditions, health benefits, pension credits, annuities, and on the job safety,” he tells the assembled workers. “That house prepared me, quite honestly, to become Secretary of Labor.”

In 1988, Walsh dropped out of Suffolk University to clean construction job sites, and then rose from benefits officer of Laborers’ Union Local 223 to president of it. He credits his union’s members’ assistance program for helping him access sobriety services in 1995. If not for that union-sponsored support, Walsh says, he may not have been elected a State Representative in 1997 or the head of umbrella union group Boston Building Trades in 2011—roles that paved the way for his 2013 election to mayor of Boston.

Walsh’s career path is an increasingly rare one. In the private sector, union membership has fallen from 32% of U.S. workers in 1960 to 6% today. Recently, there are signs of a modest revival. Biden’s pro-union rhetoric is one of them; his selection of a labor union stalwart as Labor Secretary is another. “One appointment does not overturn 40 years of globalization and corporate hostility towards unions,” says Randi Weingarten, president of the American Federation of Teachers. “But that one appointment is helping to level the playing field.”

It’s not clear it will. One big test: the fate of the Protecting the Right to Organize (PRO) Act, a bill that would ban employer interference in union elections and allow unions to collect dues from workers who opt out of official union membership. That legislation passed in the House in March, but its future in the Senate is less rosy. Democrats are exploring their options. Some provisions of the PRO Act, such as imposing civil monetary penalties of up to $50,000 for labor law violations, are likely to be included in the upcoming $3.5 trillion reconciliation bill, which can be passed along party lines, two congressional aides tell TIME. Walsh says he’s in communication with Senators about those PRO Act components.

Overall, industry still seems to have the edge in at this point in the recovery. Retail-giant Amazon beat back an initial unionization effort in Bessemer, Alabama in April, despite pro-union speeches and visits from Biden and Vermont Sen. Bernie Sanders, respectively. Google has also expressed confidence that it won’t face legal consequences for firing multiple workers involved in union organizing and labor activism in 2019, even after the acting general counsel for the National Labor Relations Board said the tech company “arguably violated” federal labor law by “unlawfully discharging” them.

Ultimately, a lot of what Biden and Walsh are doing may amount to jaw-boning. Biden appointed Walsh to vice chair the first-ever White House Task Force on Worker Organizing and Empowerment under Vice President Kamala Harris in April. By Oct. 23, Walsh says the task-force will provide Biden with recommendations on how every government agency can support and protect workers who attempt collective bargaining. That’s not exactly a game-changer.

But talk can make a difference politically. Walsh acknowledges it won’t be easy to address the systemic issues that have made current labor conditions so uneven, but then again, it won’t be the first time he’s had demons to overcome. “Being in recovery,” he tells TIME outside a rehab facility in Dayton where he just made another stump speech, “I know that the challenges that we face, they will pass.”

It took him 26 years to ascend from being a patient battling alcoholism at such a facility to speaking to one as a Cabinet Secretary. Executing major progress from that new post won’t happen overnight, either. If he makes even marginal gains for workers like Chloe Morgan, the Dayton saleswoman, he says it will be worth it. “I’m grateful that I’m in a position to help people,” Walsh confides. “That’s what keeps me sober.”

Trumper Who Chartered Buses To Jan. 6 Rally Pleads Guilty In Capitol Breach Case
To Which Hypothetical Political Party Do You Belong?