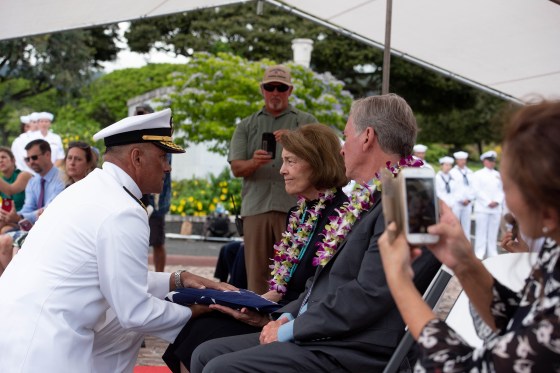 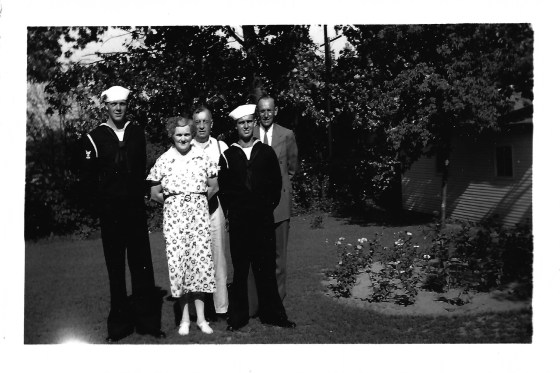 The seven sailors point their rifles skyward and fire three times in unison, shattering the silence at the National Memorial Cemetery of the Pacific. The military salute signifies the end of an 80-year-old mystery that traces back to Dec. 7, 1941, the beginning of America’s involvement in World War II.

Navy sailors Harold and William Trapp were presumed killed when their battleship U.S.S. Oklahoma was hit by Japanese torpedoes and capsized in Pearl Harbor. The Trapp family waited for weeks, months, then years as the military worked to find the brothers’ remains and send them home. But there were few intact bodies left in the water that day, and as time went on, the remains aboard the Oklahoma mixed together.
[time-brightcove not-tgx=”true”]

The U.S. Navy declared the brothers dead despite never identifying them, a fate shared by most of the 429 sailors and Marines killed aboard the ship. Bound by the forensic limitations of the era, the military collected their remains and buried them in 46 common graves in the Honolulu cemetery under granite headstones that read: UNKNOWN.

Now, eight decades later, the Trapp brothers and their shipmates are being laid to rest in graves bearing their own names. Over the past six years, an obscure unit inside the Pentagon called the Defense POW/MIA Accounting Agency (DPAA) has identified 361 men killed aboard the Oklahoma. One by one, the graves have been exhumed, the remains analyzed and identified with advances in DNA technology and science. The military hopes the Oklahoma project, completed this year, could serve as a model for identifying remains of other soldiers, killed in other wars. Based on its success, the DPAA believes there could soon be a day without any “unknown” military graves.

On June 15, a bright, clear day at the cemetery known as the Punchbowl, the Trapp brothers are buried with full military honors in a ceremony attended by family members never given the chance to meet Harold and William. “I don’t think people understand what it means to have somebody who has been unidentified,” says Carol Sowar, the brothers’ niece. “Unless you go through it personally, you just have no idea what it means to have this closure.”

Harold was born in December 1916 on the northside of Chicago. William came 13 months later. They, along with their kid sister and Sowar’s mother, Irene, were raised 65 miles east in the rural town of La Porte, Ind., after their parents sought a slower pace of life for their family. Harold was serious and thoughtful, with aspirations of becoming an engineer. William, meanwhile, was more happy-go-lucky and free-spirited.

The brothers were inseparable. Nearly every family photo shows them together—Harold, a head-taller than William—and if one of them isn’t in the picture, it’s usually because he’s the one taking it. The brothers took odd jobs together, picking fruit, caddying at the local golf club or trapping muskrats and selling the fur. So, on May 4, 1939, when William chose to enlist in the Navy, Harold joined him.

It wasn’t uncommon at the time for family members who enlisted together to serve in the same unit or on the same ship. The brothers each went through training in their respective specialties. William, an electrician’s mate, reported for duty aboard the Oklahoma in August 1939 and Harold, a fire controlman, followed eight months later. By that time, the ship was beginning to conduct exercises off Hawaii. The brothers sent photos back home showing their delight with their new island life: wearing leis around their necks, balancing pineapples in the palms of their hands or standing triumphant atop a windswept mountain.

On the morning of Dec. 7, 1941, Harold, 24, was on deck of the Oklahoma while William, 23, was working below, according to their family. The ship was moored in the shallows of Pearl Harbor’s “Battleship Row,” and unbeknownst to the brothers, formations of Japanese dive bombers, torpedo planes and fighters were already headed their way.

A little before 8 a.m., the first torpedo exploded into the side of the ship. Plumes of water climbed into the air as more torpedoes tore into the ship’s steel hull. The Oklahoma’s crew manned battle stations and tried to fight back, but it had been hit eight times within the first ten minutes. The ship listed and capsized when the ninth—and final—torpedo struck.

Sailors jumped into the scalding, oil-slick water to avoid strafing runs. Some climbed across mooring lines to reach the nearby U.S.S. Maryland. When the bombs stopped finally dropping, the Japanese damaged or sank 21 ships. A total of 2,403 Americans died, 429 of which had been aboard the Oklahoma and 1,177 on the U.S.S. Arizona, the wreckage of which still lies in Pearl Harbor to this day.

Typically, the Navy would not have attempted to recover the victims. The remains aboard the sunken Arizona, for instance, stayed with the ship. “That becomes their final resting place. It’s kind of like being buried at sea,” says Johnie Webb, director of outreach at DPAA. But because much of the Oklahoma was intact and there were sailors trapped alive inside, Webb explains, the Navy believed it might be able to salvage the ship and save the survivors.

Indeed, rescuers drilled holes and saved 32 men. Later, Navy personnel worked to recover the fallen crew from December 1941 to June 1944. But as the remains came in, laboratory staff was only able to identify 35 men. The rest were ultimately buried in mass graves at the Punchbowl. The Trapps were one of at least eight sets of brothers killed aboard the Oklahoma. “I just felt for those families,” Webb says. “It’s bad enough to lose one son, but to lose two or three in some cases… I can’t imagine the grief that they had to live with.”

The attack on Pearl Harbor occurred nine years before Carol Sowar was born, but in many ways, it shaped the course of her life. An entire side of the family was simply wiped out: no aunts, uncles nor cousins. There was a lasting sadness. Her mother, Irene Louise Trapp, grieved her older brothers’ deaths until she, herself, died in 2007.

After their deaths, the family revered Harold and William. Photos of them were preserved like relics. They were gone, no doubt. But where? Were they at the bottom of Pearl Harbor? Or in an anonymous grave?

The questions loomed for decades over Ray Emory, a Pearl Harbor survivor aboard the U.S.S. Honolulu hit the same day the Trapp brothers likely died. He spent much of his life pushing the U.S. military to identify the unknown remains. In 2003, after years of research, Emory approached the military with folders containing sailors’ personal information. Armed with service records, dental scans and other evidence, he was convinced that modern science could identify remains of at least one of the buried service members. The military agreed to investigate.

The first grave was exhumed that year and researchers were stunned to discover DNA signatures of more than 100 people in a single casket. The military made its first individual identification in 2008 and ID’d four more sailors over the next two years.

The findings showed the promise of DNA and advances in dental, anthropological and genetic evidence in identifying the lost sailors, giving hope to hundreds of families living in limbo. But the Navy was against DNA testing on the Oklahoma, not wanting to raise the expectations of gold-star families only to let them down. Over time, the innovations and reliability in DNA technology could not be ignored. In 2015, the Pentagon overruled the service and instructed the caskets to be disinterred and identified using the latest DNA technology.

The exhumation of the Oklahoma victims took place between June and November 2015 and went through analysis at the DPAA laboratories at Joint Base Pearl Harbor-Hickam, Hawaii, and at Offutt Air Force Base in Nebraska. The two labs, staffed by anthropologists, archaeologists and forensic odontologists, comprise the largest skeletal identification facilities in the world.

Forensic scientists cut postage stamp–size samples in bones and Tic Tac–size wedges from teeth and send them to the Armed Forces DNA Identification Laboratory in Dover, Del., for testing. Once extracted, the DNA is compared to reference samples from cheek swabs provided by living family members who are maternally related to the missing service member. The DPAA, which has been at work identifying remains not just from Pearl Harbor but all American wars beginning with World War II, maintains massive DNA banks. The agency uses DNA in about three-quarters of its cases.

The agency did not have all the family reference samples from the Oklahoma. Some of the service members had no living descendants or were adopted; or family members simply never submitted. The DPAA ultimately identified 361 of the 394 unknown service members aboard, which is a 92% success rate. Most of the identified sailors and Marines were buried in the Punchbowl or in their hometowns.

To identify William and Harold’s remains, DPAA researchers used mitochondrial DNA from Sowar, her brother and her two children, who all gave samples. Scientists then had to tell how each of bones that was a DNA match to the family belonged to each brother. “We were able to use dental as well as anthropological methods to individuate the brothers,” says Debra Prince Zinni, the DPAA laboratory deputy director. “We knew dentally, which skull belonged to which brother. And then the stature really came into play. Harold is several inches taller than William, so just from the length of the bones, we were able to determine which brother was which.”

When the call finally came to Sowar in November 2020, she was dumbfounded. She was sad, of course, but also relieved to have certainty about her uncles’ fates. She thought of her mother, who would never have that satisfaction, and of her grandmother, who lived out the rest of her life without her two boys. “I just cried and cried and cried from relief,” Sowar says.

After she watches her uncles laid to rest under their own headstones at the Punchbowl, Sowar feels as though she’s reached the finish line of a marathon. “I don’t know how I can explain it better than I feel… that this is where they belong,” she says. “And yes, it’s 80 years, and it took a long time to come home, but they’re home.”

Shortly after the ceremony, Sowar walks into the cemetery’s Courts of the Missing, which documents each service member who went missing-in-action fighting America’s wars throughout the Pacific. Standing in the afternoon sunlight, she scans the thousands of names chiseled into the stone walls until her eyes fall on her uncles’. There, next to each one, she places a gold rosette. The two men are now accounted for.

—With reporting by Nik Popli