Poachers in Africa, who are now armed with military-style weapons and even helicopters to hunt their prey, have a new adversary: dogs with a nose for detection.

Deployed in key locations across six African countries are around 50 detector dogs.

They have sniffed out contraband – elephant tusks, rhino horns and pangolin scales – leading to hundreds of arrests of traffickers and the disruption of smuggling routes.

There have been almost 400 seizures of illegal wildlife products since the programme, funded by the African Wildlife Foundation, started in 2011.

Will Powell, the director of Canines for Conservation, says it is “a public-private partnership” with governments that helps them develop dog units with their wildlife organisations.

“That includes strategy, standard operating procedures and veterinary protocol. With their help we select rangers and train them as detection dog handlers.”

Dog handling has become a sought-after job among employees of wildlife authorities in Tanzania, Kenya, Uganda, Mozambique, Botswana and most recently Cameroon.

The handlers learn their skills over an eight-to-10-week period.

Handlers are carefully matched with their canine partners, which is important as some handlers have not been around dogs before, or have only known dogs as guard dogs.

They learn to love, care for and respect their dogs.

The recent graduating group from Cameroon is a case in point and there were a “few teary eyes”, according to Mr Powell, when they headed home ahead of their canine partners.

Mr Powell selects the dogs in Europe, in countries where there is a culture of working dogs including the Netherlands, the Czech Republic and Hungary.

The dogs have already had some thorough training – but he brings them up to the equivalent of a PhD.

“We look for open, confident, level-headed dogs able to deal with distraction and travelling,” says Mr Powell, a British citizen, who started his career training dogs to detect landmines.

“They must be gregarious and friendly to deal with a number of dog handlers.”

Malinois, which are Belgian shepherds, are famously intelligent, tough and can cope with heat.

The springer spaniels have good noses and a friendly nature.

And they have another advantage, Mr Powell explains.

“There is often a fear of dogs, and shepherds with pointy ears are regarded as scary while floppy ears, like a spaniel, look less aggressive. In areas where you are working around people it’s easier to use spaniels.”

Both breeds have a strong work ethic because they love to be busy.

The working life of the dog depends on the breed.

For the Malinois, that can be between 12 and 13 years. When their working life is finished, they are found appropriate homes or are returned to Mr Powell’s base in Tanzania.

“We start by teaching the dogs to detect ivory as it’s the hardest smell to detect. Rhino horn and pangolin scales are easier to pick up,” he says.

“We now teach them to detect lion bones and teeth, which are trafficked for Chinese medicine now that tigers have been largely wiped out.”

Training the dogs to a top level in detecting takes four to five months.

All the wildlife products they must find are hidden in a variety of realistic ways.

In the field the dogs have found ivory and rhino horn concealed in coffee and chillies, as well as wrapped in layers of foil and plastic. They’ve even found a lion’s tooth hidden in a thermos.

When dogs find something they are rewarded and given their toys. The shepherds have tougher toys to chew on than their soft-mouthed spaniel colleagues.

The specially trained dogs go on to sniff luggage and cargo for ivory, rhino horn and pangolin scales.

The dogs make it more expensive, risky and dangerous for traffickers.

A case in point is Jomo Kenyatta International airport in Kenya’s capital, Nairobi, where there were 51 seizures of illegal products in the first year. By 2019 it was down to a handful.

“The traffickers know we are there. And it resulted in a seizure of 23kg [50lb] of rhino horn in Uganda,” says Mr Powell.

“The guy bought the rhino horn in Nairobi but he knew about the dogs there so he took a bus to Entebbe, but was caught there.”

Each location brings different challenges and strategies. For example, in Mozambique at Maputo airport handlers with detector dogs greet passengers when they walk in with their luggage carts.

Canines for Conservation have what they call the “Five Freedoms” at the heart of the dogs’ welfare: 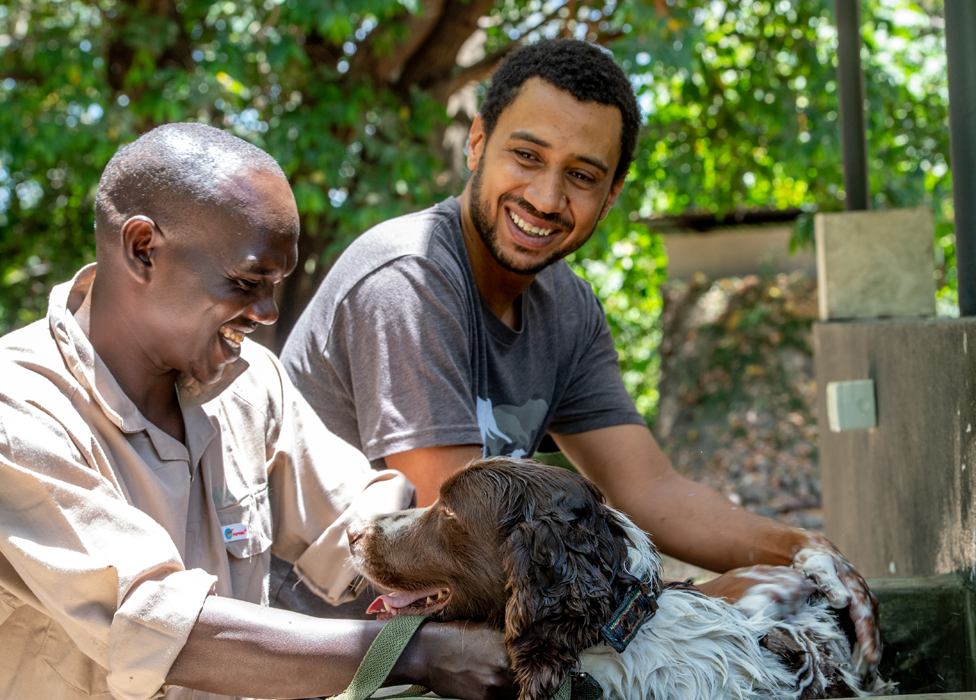 All the dogs are fed dry biscuits donated by a French company, Royal Canin, which supports the programme.

And all the dogs live in kennels with gardens and places to relax.

The partner governments respect the Five Freedoms. And with every sniffer dog team, a trainer, employed by the African Wildlife Foundation, is embedded on the ground as a technical adviser.

“It’s a collaboration but it’s more than just the dogs,” says Mr Powell.

“The success of the programme is down to the handlers and the governments. Credit where credit is due.

“And we all want to stop the illegal trade that threatens Africa’s wildlife.”

All photographs subject to copyright