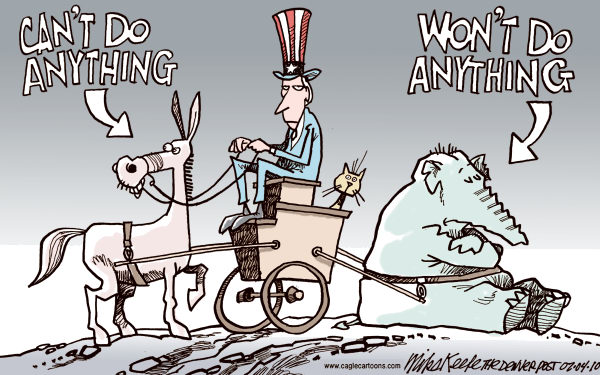 Yesterday was my review of the best and worst policy developments in 2020.

These are not predictions (economists have a terrible track record when try to make forecasts). Instead, these are merely good and bad things that might plausibly happen.

We’ll start with the positives.

Gridlock – I don’t necessarily think Biden is a hard-core leftist, but his fiscal agenda is terrible. I want him to have an excuse to put those policies on the back burner, and that will happen if Republicans control the Senate and we have “gridlock.”

Simply stated, I’d rather nothing happen in Washington than have bad things happen. By the way, I’ll openly admit to being a hypocrite on this issue. At some point, I hope there will be a White House and a Congress that want to reform the tax code and fix entitlements. When that happens, I won’t want any obstacles.

Supreme Court tosses civil asset forfeiture – I’m recycling this item from last year because I’m hopeful that it’s just a matter of time before the Justices toss out this wretched policy that literally allows government to steal property from people who have not been convicted of any crime, or even charged with any wrongdoing.

Trade liberalization – To be charitable, Trump was a disaster on trade. Biden almost certainly will move policy in the right direction, including a restoration of the World Trade Organization‘s ability to settle disputes.

I used to list the collapse of Venezuela’s totalitarian government as one of my annual hopes and I still think that will happen, hopefully sooner rather than later. That being said, I’m getting a superstitious feeling that I’m jinxing regime change since I’ve listed that hope the past three years and it hasn’t happened.

Now let’s look at the negatives.

Absence of gridlock, leading to big anti-growth tax increases – If Democrats win both Senate seats in Georgia in a few days, that will give them control of the Senate, which will dramatically increase the danger that Biden will push his class-warfare tax policies.

Re-regulation – Trump did not have a perfect track record on red tape (coal subsidies, property rights, Fannie/Freddie, for instance), but there was a net shift in the right direction during his four years. Biden almost certainly will impose more intervention. Indeed, I’m not aware of a single regulatory issue where he’s on the right side. So don’t get your hopes up for better showerheads and dishwashers.

Kamala Harris becomes president – The Vice President-Elect staked out policies far to the left of Biden when she ran for president. And she has a reprehensible track record of trampling rights when she was California’s top cop. That’s an unsavory combination. If she’s even half as bad as her rhetoric, we all should wish Biden good health for the next four years.

Nicola Jennings on Gavin Williamson’s latest U-turn — cartoon
In 2020 the IAEA did not Stop for a Single Minute!