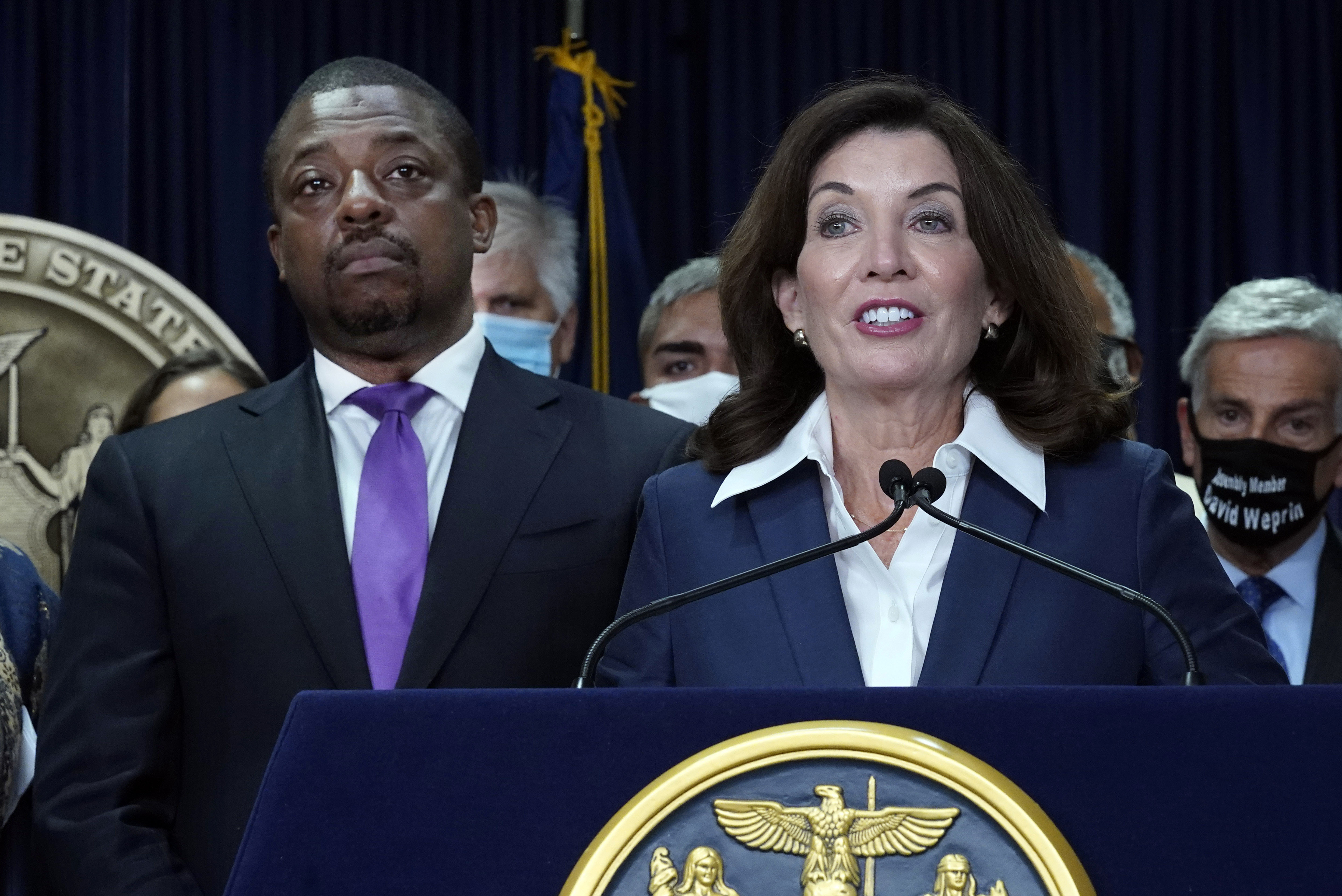 ALBANY, N.Y. — New York Gov. Kathy Hochul said Wednesday she is planning to choose a replacement for former Lt. Gov. Brian Benjamin, but said there is still a lot to figure out as she considers who that might be and whether there’s any path to finding a different running mate to put on the ballot this year.

“We’re going to go through a process right now,” Hochul said in an interview on WNYC, her first detailed comments on Benjamin’s arrest on an alleged bribery scheme on Tuesday and resignation several hours later.

“It was a surprise, it truly was. But it was clear to both of us that he could not continue to serve as lieutenant governor and I want New Yorkers to have complete confidence in their government.”

Hochul gave every indication that she would choose a replacement for Benjamin, which she has the power to do unilaterally. But she stressed that the search for a new lieutenant is still “very early in the process.”

“Obviously there’s a lot of people to consider, and we’ll be going through the background vetting process and determine the best route forward. There’s been absolutely no decisions made, it’s too early in the process,” she said.

Hochul, who is from Buffalo, is likely to look to New York City for Benjamin’s successor to have a balanced ticket and administration.

Former New York City mayoral candidate Kathryn Garcia, who now serves as Hochul’s director of state operations, was among the names being floated Wednesday, according to people familiar with the discussions.

“I’m focused on the job that I have, which is plenty big enough,” Garcia said Wednesday.

Ray McGuire, another 2020 mayoral candidate and a former executive at Citigroup, has also been mentioned as a potential candidate, according to people familiar with the discussions. He declined comment Wednesday.

And Diana Reyna, who is running for lieutenant governor with gubernatorial candidate Tom Suozzi, could be tacitly supported by Hochul before the June Democratic primary.

“I have not even heard that rumor,” Hochul responded about Reyna when asked about the speculation by WNYC host Brian Lehrer. “This is very early in the process. There are a lot of people to consider.”

The governor suggested a willingness to look into overhauling the way candidates are screened.

Benjamin said in an interview last week that he had not told Hochul everything about the probe into straw donors to his 2021 campaign to be New York City’s comptroller, and one of the charges against him says he lied on a background check form that asked about his history of doing government business with people whom he had solicited campaign contributions from.

“I made the best decision I could with the information I had at the time, but clearly we need to have a different process, a more strengthened streamlined process, that can get us to more detail than we had at the time,” Hochul said. “We obviously were not aware that there had been investigations from the federal authorities or even the district attorney’s office at the time; there would have been a different outcome had we been aware of that.”

Hochul also did not offer much about her current plans to attempt to replace Benjamin’s name on the June primary ballot, a maneuver that would be legally complicated at best. But she did say that this is another area of law worth considering changing.

Simply put, the options to remove Benjamin from the June 28 primary ballot would be him moving out of the state or finding him another spot in a different election, but it appears unlikely state law would allow such moves ahead of the primary.

“The laws are very complicated. I think that’s something worth looking at, how difficult it is if this circumstance happens or another circumstance occurs to be able to make a change after a certain deadline. But that’s something we’re examining right now. I don’t know the answer at this moment, but it’ll all be clear as soon as we get a chance to do a dive into what our options are at this time,” Hochul said.