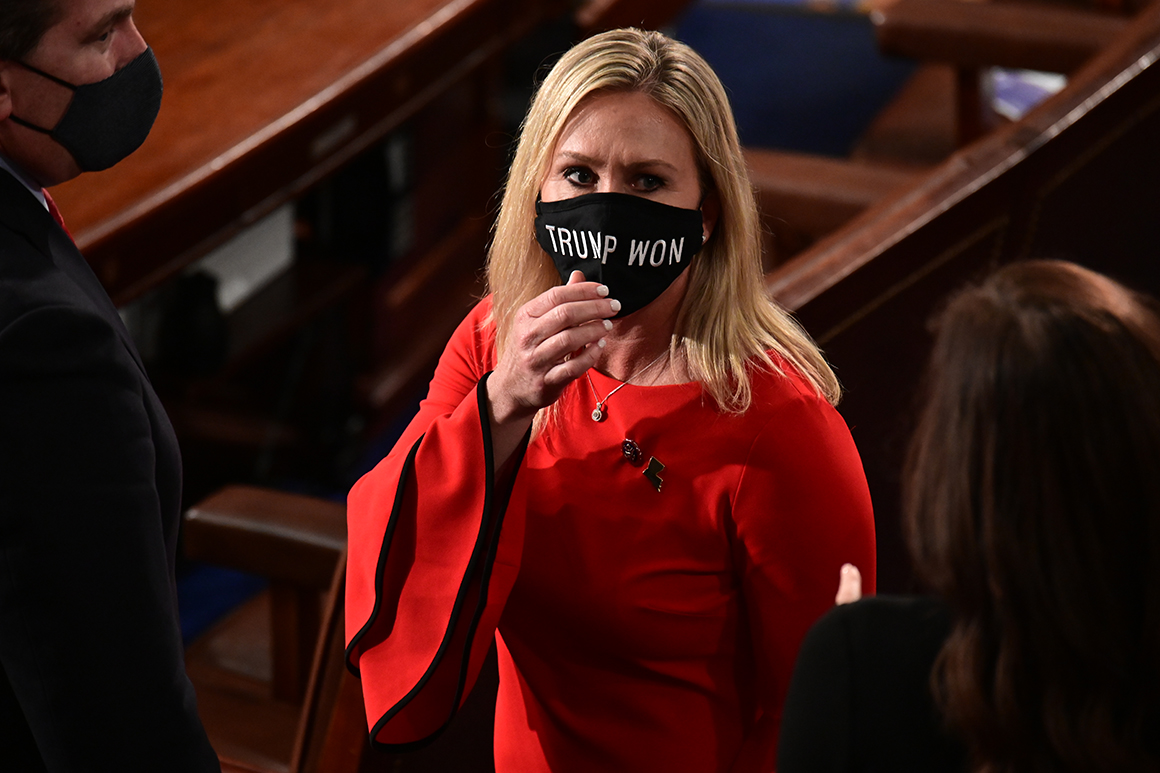 The House GOP’s high-profile freshman class is fracturing less than two weeks into the new Congress, and it’s all over one man: Donald Trump.

Trump’s failed gambit to overturn the election — and the deadly Capitol riots that followed — forced the newest House Republicans to take some of the toughest and most consequential votes of their careers during their very first days in office.

The result has left a deep and bitter divide among the freshmen, who have already begun to publicly and privately lash out at one another as tensions in the party ramp up. Nearly a dozen newcomers ended up opposing the election challenges that were lodged by a majority of their Republican colleagues, while just one freshman — Rep. Peter Meijer of Michigan — broke ranks to support removing Trump from office.

Now, the 45-member group finds themselves increasingly cleaved into two camps of freshmen. There are the members who flipped suburban swing-seats and rejected Trump’s false claims of voter fraud — a group that includes single moms and Cuban and Korean immigrants. And then there are those such as Reps. Marjorie Taylor Greene and Lauren Boebert, who won deep red districts where loyalty to the president is paramount and conspiracy theories are commonplace.

The warring factions in the freshman class mirror the broader rift in the GOP, where there is a widening gulf between a Trump-loving base and the moderate wing that can help make Republicans a majority party in 2022.

And some freshmen have been more vocal than others. One standout is Rep. Nancy Mace of South Carolina, who won back a GOP seat in the Lowcountry and has emerged as the most outspoken critic of Trump and the “QAnon wing” in her class.

Mace has excoriated some Republicans for their potential roles in inciting the violent mob on Jan. 6, calling for them to face investigations and other possible repercussions such as censure — which would represent a stinging rebuke of a colleague.

“It’s very important that we hold everybody accountable, and I hope that people are investigated to the fullest extent of the law — starting from the president on down. Including Members of Congress,” said Mace, noting “all options” should be on the table. “We have allowed QAnon conspiracy theorists to lead us.”

Mace, however, said she’s not worried about potential blowback for criticizing her new colleagues: “I do not operate out of fear.”

But she’s also not blind to the risks facing her and her family’s physical safety. Mace said she applied for a concealed carry permit and sent her kids home from D.C. early after she started receiving threats for vowing to certify President-elect Joe Biden’s win.

Meijer, meanwhile, said he is now investing in body armor after he joined just nine other Republicans to vote for impeachment. He has also suggested that fears for personal safety had influenced some of his colleagues to support Trump’s challenges to the results of the election.

“This has been for many of us, especially those who decided to vote for impeachment, one of the worst weeks of our lives, one of hardest votes we’ve ever had to take,” Meijer said on MSNBC. “I’ve been talking to a number of colleagues, just felt physically nauseous.”

To the frustration of some GOP lawmakers, House Minority Leader Kevin McCarthy counseled some of the freshmen about which states to object to and even warned of potential primary challenges if they didn’t, POLITICO first reported.

And in the hours after the Jan. 6 riots, when Congress began resuming the electoral certification process, some freshmen were still torn about how to vote and sought the advice of more senior lawmakers, according to sources familiar with the conversations.

But in the end, the majority of the new House Republicans objected to the results, along with more than 120 GOP lawmakers. Several of the freshmen were even leading the charge against Biden’s victory and spoke out on the House floor, including Boebert, Greene, and freshman Rep. Madison Cawthorn (R-N.C.).

The stark differences in style and substance have led to some clashes among the freshman. During a GOP conference call on Monday, Mace and others criticized Boebert for suggesting that Capitol Police officers were involved in the riot and for live tweeting the speaker’s whereabouts during the siege. Boebert responded that it wasn’t her intent, and asked her colleagues not to accuse her of anything.

And the following day, Axios reported that Mace slammed Greene in a private text chain among all the new GOP members, calling her the “literal QAnon lady.” Greene’s office said that different viewpoints are to be expected in such a large class, but said the congresswoman was primarily concerned about the violation of privacy.

Greene responded to Axios with a similar sentiment: “Who is the freshman rep that is betraying everyone’s trust and leaking our group chat to the press?”

McCarthy has tried to maintain unity in his ranks, repeatedly warning members not to attack each other over their positions on the issue.

“I do want everyone to understand: emotions are high,” McCarthy said on a GOP conference call this week, according to a source familiar with the conversation. “What you say matters. Let’s not put other people in danger. Let’s watch what words we’re using and definitely not be using other members’ names in any media.”

Amid the riots and impeachment, few incoming freshmen classes have experienced as chaotic of first few weeks in office. And the political implications of their votes will reverberate throughout the coming months: the House Democratic campaign arm is already seizing on their votes on impeachment and vote certification to use as a cudgel in 2022.

GOP recruiters crowed about the rising stars who ousted Democrats in November, a diverse crop of candidates who they hoped would improve the party’s image in suburban America and dominate the spotlight. There’s Reps. Young Kim, one of the first Korean-American women in Congress; Rep. Maria Elvira Salazar, whose family fled communist Cuba; and Mace, the first woman to graduate from The Citadel military college.

But the large number of retirements by older mainstreet Republicans in the Trump era mean the party has also seen an infusion of new representatives from safe, red seats. The most notable are Greene and Boebert, who both suggested before winning election that they believed in aspects of the far-right QAnon movement.

Many of those new members have proved eager to imitate the president’s brash and often-offensive style. Rep. Mary Miller (R-Ill.) had to apologize during her first week in office for praising Hitler in a speech addressing Trump supporters. Meanwhile, Rep. Barry Moore (R-Ala.) deleted his personal Twitter account after complaining that there were “more arrests for stealing a podium” on Jan. 6 than for “stealing an election on” Nov. 3. Then there’s Cawthorn, who urged a crowd to “lightly threaten” their members of Congress if they want to motivate their votes and actions.

The coronavirus — and how seriously to take it — has also created a rift in the new GOP class. Freshman Rep. Bob Good (R-Va.), a hardline conservative who ousted the libertarian-leaning Denver Riggleman in a primary, faced blowback for calling Covid “a phony pandemic” in a December speech in downtown D.C.

And Greene has refused at times to wear a mask, arguing it’s “my body, my choice.”

To which, Mace shot back in a subtweet of her own: “My body. My choice. And I choose to wear a mask.”

Daniel Lippman contributed to this report.