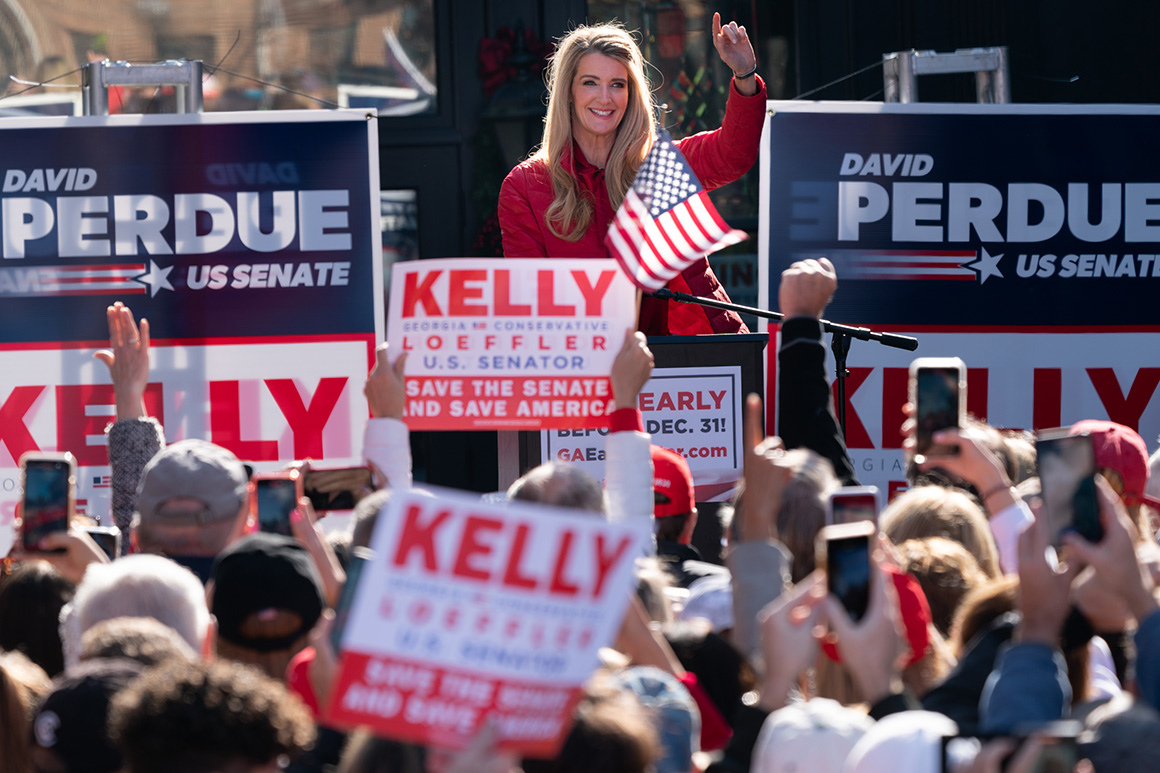 With a potential government shutdown averted, the political center of gravity has shifted back to Georgia and its dual Senate runoff elections.

President Donald Trump backed off his dayslong threat to veto a combination spending bill and coronavirus relief package, signing the omnibus legislation into law on Sunday night. Shortly beforehand, Trump teased that he would hold a rally in Georgia next Monday — one day before the Jan. 5 runoffs — to boost Sens. David Perdue and Kelly Loeffler. The event in Dalton is likely to be one of the last opportunities for the president to show off his political influence while in the White House and further cement his grip on the GOP after he leaves office in January.

“On behalf of two GREAT Senators, @sendavidperdue & @KLoeffler, I will be going to Georgia on Monday night, January 4th., to have a big and wonderful RALLY,” Trump wrote on Twitter. “So important for our Country that they win!”

Democrats are looking to build on President-elect Joe Biden’s victory in the state — the first time Democrats had won there on the presidential level in nearly three decades — and solidify Georgia’s status as a battleground state for the foreseeable future.

Both sides have used the fitful round of coronavirus negotiations to their advantage, with Democrats hoping Trump’s political brinkmanship turns off voters struggling to endure as the pandemic continues to rage.

“Not only is this a belated investment. It is also a very poor investment,” Stacey Abrams, the former Democratic gubernatorial candidate, said Monday on CNN. “We need two U.S. senators who are willing to go to Washington and be in partnership with the new president, to deliver real Covid relief to the state of Georgia.”

Perdue — along with House Minority Leader Kevin McCarthy and Sen. Lindsey Graham (R-S.C.) — were among the Republican members of Congress lobbying Trump behind the scenes to sign the bill in recent days and avert the fallout of a government shutdown and the expiration of several safety-net provisions enacted earlier this year.

Republicans need to win only one of the two runoffs to maintain control of the Senate going into next year and prevent unified Democratic control of both the White House and Congress.

“If you want to stand against a socialist takeover of the United States Senate, it is imperative that Georgians turn out to vote,” Rep. Elise Stefanik (R-N.Y.), whose standing among conservatives skyrocketed during the Trump years, said Monday on Fox News.

The GOP typically has an advantage in run-off contests, which are generally low-turnout affairs, particularly in a state like Georgia that Republicans have done well in historically. However Trump and others have repeatedly undermined the integrity of Georgia’s election process, potentially diminishing enthusiasm among some Republican voters who no longer believe the runoffs will be a fair fight.

The president has also repeatedly put Republicans in difficult positions in recent weeks, issuing a rash of pardons to convicted former lawmakers and Trumpworld associates, vetoing a defense policy bill before Christmas that Congress is scheduled to vote to override in the coming days, and calling for even more money to go out directly to Americans — to the consternation of fiscal conservatives.

“Unfortunately, we have a lot of debt junkies in Washington, D.C., on Capitol Hill, both in the House and in the Senate,” Rep. Mo Brooks (R-Ala.), a leader of the effort to reverse Trump’s loss to Biden in Congress, said Monday on Fox News. “So I would imagine that anything that spends more money, these folks are going to pass. That’s just the nature of the beast here on Capitol Hill.”

The House has scheduled a vote for Monday to boost direct payments to people to $2,000, forcing Republicans to go on the record versus the president’s stated policy and putting pressure on the Senate.

Trump‘s veto threat left Republican messaging on the omnibus legislation, as the provisions that the president maligned as “wasteful spending“ were negotiated with the blessing of Treasury Secretary Steven Mnuchin and other White House officials. Trump himself also stayed on the sidelines during the monthslong impasse, leaving the GOP with little political cover after he injected himself late into the process.