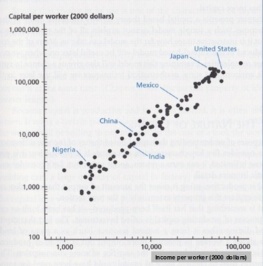 When politicians target “the rich” with class-warfare schemes like wealth taxes, it’s often ordinary people that bear the costs.

For a painful example of how this works in the real world, check out the first 42 seconds of this video.

From an economic perspective, this is a story about secondary or indirect effects. Or, as noted in the video, there are unintended consequences.

In most cases, the fundamental problem with class-warfare taxes is that they penalize saving and investment with double taxation.

This is bad for workers because there’s a strong link between the level of capital (i.e., machines, tools, technology) and productivity.

And since there’s also a strong link between productivity and pay, this explains why ordinary people generally don’t enjoy much opportunity in societies with spite-driven tax laws.

Now let’s consider the case of the luxury tax, which was part of President George H.W. Bush‘s disastrous 1990 tax increase.

Rather than being a broad tax on saving and investment, it was an excise tax on a group of products (the levy on expensive boats got most of the attention).

Let’s see what actually happened, and we’ll start with some excerpts from this 1993 column in the Washington Post by James Glassman.

Rich people aren’t happy about paying this extra money. Even if they can afford it, they think it’s unfair. And in some cases, they’re refusing to pay it — simply by refusing to buy new boats and planes. Of course, rich people don’t have to buy a new 90-foot Broward… So the federal government doesn’t get the tax money — and, worse, Broward doesn’t sell its yacht and various boat builders get put out of work.

As a result, in its first year and a half, the yacht tax raised a pathetic $12,655,000 for the Treasury. …Meanwhile, the tax has contributed to the general devastation of the American boating industry — as well as the jewelers, furriers and private-plane manufacturers that were also targets of the excise tax… What went wrong with the luxury tax was that, in trying to go after the rich guys’ toys, Congress put the toymakers out of business. The rich guys, meanwhile, bought other toys (including foreign-made ones) not covered by the tax; or they bought used toys and refurbished them; or they simply saved the money, waiting to spend it another day.

The government still collected some money from the tax on the “toys,” but it’s also important to understand that it lost money when the “toymakers” lost their jobs.

So there was a Laffer Curve-type effect.

The great, late, Walter Williams opined on this issue more recently. Here are segments of his 2011 column.

Let’s look at what happened when…George H.W. Bush signed the Omnibus Budget Reconciliation Act of 1990 and broke his “read my lips” vow not to agree to new taxes. When Congress imposed a 10 percent luxury tax on yachts, private airplanes and expensive automobiles,

Sen. Ted Kennedy and then-Senate Majority Leader George Mitchell crowed publicly about how the rich would finally be paying their fair share of taxes. What actually happened…In the first year, one-third of U.S. yacht-building companies stopped production, and according to a report by the congressional Joint Economic Committee, the industry lost 7,600 jobs. When it was over, 25,000 workers had lost their jobs building yachts, and 75,000 more jobs were lost in companies that supplied yacht parts and material. …Jobs shifted to companies in Europe and the Bahamas.

The U.S. Treasury collected zero revenue from the sales driven overseas. …Congress told us that the luxury tax on boats, aircraft and jewelry would raise $31 million in revenue a year. Instead, …job losses cost the government a total of $24.2 million in unemployment benefits and lost income tax revenues. The net effect of the luxury tax was a loss of $7.6 million in fiscal 1991. …Why did congressional dreams of greater revenues turn into a nightmare? Kennedy, Mitchell and their congressional colleagues simply assumed that the rich would act the same after the imposition of the luxury tax as they did before and that the only difference would be more money in the government’s coffers. Like most politicians then and now, they had what economists call a zero-elasticity vision of the world, a fancy way of saying they believed that people do not respond to price changes. People always respond to price changes. The only debatable issue is how much and over what period.

It’s quite possible that the government will collect more money if Biden’s fiscal plan is enacted, but not as much as politicians think. More important, there will be lots of collateral economic damage.

Call me crazy, but I don’t want ordinary people to lose jobs simply because greedy politicians want more money so they can try to buy more votes.

P.S. If it’s any consolation, politicians from other nations can be equally foolish and short-sighted. Both France and Italy suffered when governments went after yachts.

P.P.S. You won’t be surprised to learn that pro-tax former Senator John Kerry avoided taxes on his yacht.