A battle is raging in a commuter town on the outskirts of London to unseat Boris Johnson – a prime minister defending the smallest constituency majority for nearly 100 years.

A carnival floods the streets of Uxbridge. With glitter on their faces, a sea of young people follow a red Routemaster. Loud music booms from the open-top bus.

Despite the rain, residents dance along with the parade as it snakes through the west London suburb, which lies 17 miles from the Houses of Parliament. Others watch with disgust as the group’s occasionally lewd banners pass by. One of the less offensive reads: #KickBorisOut. Flyers are thrust into the hands of bystanders, urging them to register to vote.

The rally is run by an anti-Tory group which says people here are fed up with an MP who is a “power-hungry Eton boy who lives in a million-pound house on the other side of London”. That MP happens also to be the prime minister. But could Boris Johnson actually face defeat in Uxbridge and South Ruislip?

Last month, election modelling by YouGov estimated Mr Johnson was on course to win his seat comfortably. Yet a member of the protest group was undeterred. “From what we’re seeing, he should be worried.”

The A40 splits Uxbridge and South Ruislip in half. Depending on which side of the road you live could mean an eight-year gap in your life expectancy. Voters living in Eastcote, in the affluent north of the borough, can expect to reach 84 years of age. Those living in Botwell, in the poorer southern tip, tend to make it just past 76.

The south of the constituency is dominated by a large student population, centred on Brunel University. And this commuter-belt corner of London, 15 miles or so from Parliament itself, has a large, has an affluent immigrant population, mostly of South Asian heritage. The streets here are lined with independent shops and market stalls. An entrepreneurial spirit runs through the town, and two major infrastructure projects bear down on it – both of which could influence the election here. The first phase of the HS2 high-speed railway passes through Ruislip. But a bigger issue looms overhead.

Heathrow airport is in the next-door constituency, where a third runway is expected to bring an extra 730 flights a day. Mr Johnson is seen as particularly vulnerable over Heathrow.

Before reaching government he was a vocal critic of the airport’s expansion. As mayor of London he vowed to “lie down with you in front of those bulldozers and stop the… runway”. Yet, as an MP, he was a notably absent in June 2018 when Parliament voted for the project.

Last month, Greenpeace protesters gave him the chance to fulfil his promise, parking a bulldozer outside Uxbridge Tube station.

It could be an important factor here. In 2017, Boris Johnson won the seat with a majority of 5,034. It was the smallest majority of any sitting prime minister since 1924 and is the 181st-slimmest majority out of 650 seats. It was also the 69th most marginal Tory seat.

Given who the MP is, Uxbridge and South Ruislip has become one of the most high-profile contests of the election. 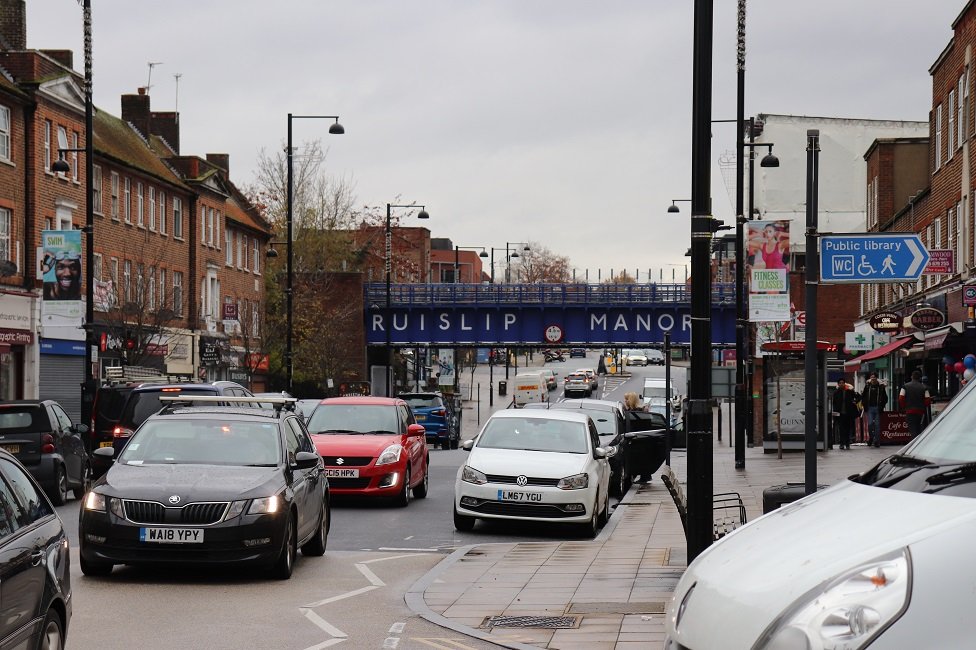 How did the area vote in the EU referendum?

Many residents look back fondly on Mr Johnson’s eight years as mayor of London.

Justify Salon in Ruislip Manor, was one of many businesses in the area that benefited from grants handed out during Mr Johnson’s time in City Hall. Owner Justine McKenna still keeps a photo of her and Mr Johnson in the salon. But she’s losing faith. “He’s not around very much since he became an MP. It leaves him at risk,” she says. “I don’t think he’s doing a lot for small business any more.”

She says “a lot of people are looking at Jo Swinson”, the Liberal Democrat leader.

Both Shan Baker and her husband Phil are considering not voting Conservative for the first time.

“We don’t like him as a man,” says Mrs Baker, who runs a market stall in Uxbridge town centre.

“We were very supportive of him. We thought he was a good mayor, but he’s turned out to be very self-serving as an MP,” Mr Baker adds. “He’s got all these Brexiteers in the cabinet and I think they’re not very nice people. The Tory party has moved quite a lot to the right, and we like our centrists.”

Brexit will be a factor here. In 2016, Hillingdon, the London borough that includes Uxbridge and South Ruislip, voted 56% in favour of leaving the European Union. It was one of only four London boroughs to vote Leave.

There is a definite weariness among voters after three years of Brexit debate. The Liberal Democrat candidate, Joanne Humphreys, is hoping to offer a compelling Remain option in the seat of the nation’s most prominent Brexiteer. But this still feels like Brexit country. The idea of cancelling Brexit, or running another referendum horrifies some.

Jamie Follett, a market stall holder in Uxbridge, says he will be voting Conservative until “Brexit is sorted”. “It doesn’t matter how I voted. The fact is we voted, and there has been an outcome and you have to deliver on it.”

Mr Follett likes the prime minister’s energy. Even the recent legal troubles over Mr Johnson’s attempt to suspend Parliament for five weeks “shows he is trying to be different”. “I know it was wrong, but I appreciated it,” Mr Follett says. “We need someone strong to just get us through. In general people like me would vote Labour but I need Conservatives to stay in, at least for a little bit, to keep it nice and steady.”

Mr Johnson’s personal brand has definitely won him fans. “We’re not just going to support Boris, we are going to campaign for him,” says Asif Meer, owner of a motor mechanics garage in the nearby area of Yiewsley.

He recounts how one meeting with the PM turned Mr Meer from a Labour voter into a passionate “team Boris” supporter. He had previously been upset by Mr Johnson’s comments about women in burkas “looking like letter boxes”. “When I met him he explained he doesn’t mean it that way,” he says. “I like him as a person. It’s a personality rather than the national issues. He’s a good guy.”

Despite the high stakes, the local Conservatives’ campaign will not change too much from previous years. “We don’t sense a feeling for change,” says the Conservative leader of Hillingdon Council, Ray Puddifoot.

Seasoned local activists continue the same door-knocking routes and advertising campaigns they did at the last election. These are the tactics that have helped Mr Puddifoot lead a Conservative majority on the council for 20 years. All the councillors in Mr Johnson’s corner of the borough are Conservatives. “We’re taking nothing for granted but I think it’s looking good at the moment,” Mr Puddifoot says.

It is unclear how much time Mr Johnson has spent here during the campaign.

Despite repeated questioning the Conservatives were unable to say how often their candidate had visited the area. The first local hustings was cancelled as it clashed with a TV leaders’ debate. At a hastily re-organised debate, held in Yiewsley on Thursday night, Mr Johnson failed to show.

But even without visiting, Mr Johnson’s presence looms large.

Most people here have a story of meeting Mr Johnson, or a child who has accepted a school award from him.

But political groups from across the spectrum can smell blood. A huge door-to-door campaign is under way, with Labour activists trying to capture floating voters.

“We’ve definitely noticed a shift towards Labour,” says the party’s candidate, Ali Milani. “This election will be won on local issues,” he says. “People can have a conversation with me and bring up a local school or a local hospital and I’ve used those services. Everyone says to me that we should be worried because Mr Johnson is a much better campaigner than Theresa May, but that’s not what I’ve seen.”

Momentum, the pro-Jeremy Corbyn grassroots group, has dispatched thousands of activists to the area. “This is going to be a good turnout battle,” Laura Parker, Momentum’s national co-ordinator, says. “It is doable. It’s not fantasyland because we fancied doing a stunt.

“I’m old enough to remember the Portillo moment,” she says, referencing the defeat of the then Tory cabinet minister Michael Portillo in 1997. “And oh, what joy that was. This would be even bigger.”

The student vote could also prove important. Brunel University has a population of nearly 10,000 potential voters. Students have the option of voting in the home constituency or registering to vote at university. “I’ve registered to vote here because I want to vote Boris out,” says Ellie Hiatt, a Brunel student. “Everyone’s registered to vote here.”

Fellow student Rebecca Stone adds: “I’m not going to be at home for the election. Uxbridge is a marginal.” Yet neither is sure exactly who will get their vote.

No prime minister has ever lost their seat. If the Conservatives win the general election but Mr Johnson loses his seat, constitutionally the country would be in uncharted waters. He could remain prime minister while attempting to rejoin Parliament. A supportive Tory MP in a safe seat could be asked to make way, leading to a by-election. But there would be intense political pressure for Mr Johnson to step down.

Taking down the prime minister would be the ultimate scalp. With so much at stake, neither side is backing down. Labour’s Mr Milani says Uxbridge and South Ruislip has “become the battleground of the country”.

And by the early hours of 13 December, voters here might ultimately have decided which person gets the keys to Downing Street.

What are the parties promising you?

Here’s a concise guide to where the parties stand on key issues, such as Brexit, education and the NHS.

England centre Joseph returns for Bath v Clermont
Sally Challen case: ‘Mum killed Dad but we get to be happy again at Xmas’