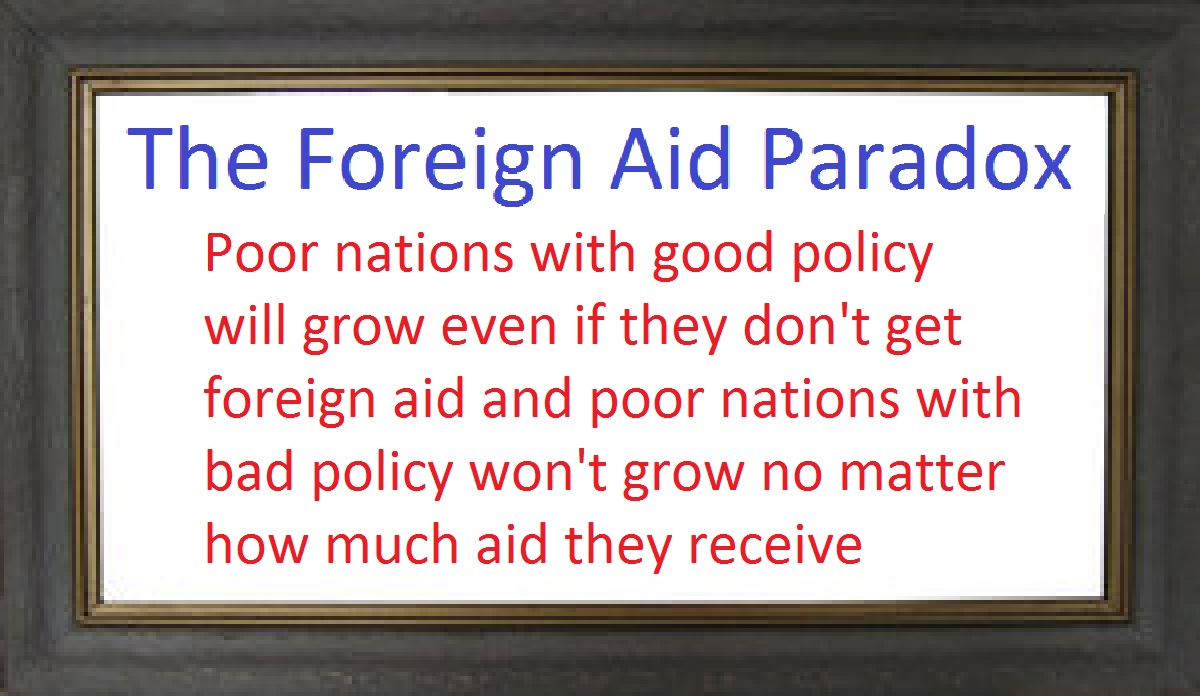 Given my libertarian sensibilities, I would probably object to foreign aid programs even if they worked.

But I don’t have to deal with that potential quandary because we have ample evidence that you don’t get prosperity by giving money to politicians in poor countries.

Indeed, such policies arguably exacerbate poverty by enabling bad policies such as a bigger burden of government spending.

And when government gets bigger, that creates more opportunities for corruption (the same problem exists in developed nations).

Yet the crowd in Washington seem willfully blind to these problems.

For instance, in a column for today’s Washington Post, Treasury Secretary Janet Yellen and USAID Administrator Samantha Powers opine on the topic of global corruption and never even acknowledge that more government enables more corruption.

Around the world, in countries as varied as Russia, Venezuela and China, the wealthy and the well-connected launder their assets through complex networks of shell companies or transactions involving art, real estate and, occasionally, cryptocurrencies. …what links all corrupt acts is that they take resources from citizens, undermine public trust and — ultimately — threaten the progress of those who fight for democracy.

…Autocrats use public wealth to maintain their grip on power, while in democracies, corruption rots free societies from within. …Moving forward, the U.S. government will require many U.S. and foreign companies to report their true owners to the Treasury and to update us when they change hands. We’re also working toward new reporting requirements for real estate transactions and will be enlisting other nations to address these issues. …the United States will deepen and expand support for those fighting kleptocrats and bad actors through a new anti-corruption response fund. …we’ve seen politicians win landslide victories by running on anti-corruption platforms. We want to support their reforms.

Rather than deal with the underlying problem of excessive government, Yellen and Powers focus on the symptom of politicians with stolen loot.

They specifically want readers to think politicians in the developing world won’t steal as much if there’s more red tape that makes it hard for them to invest their loot in the United States.

But since existing laws and regulations against money laundering have been an expensive failure,

their proposals seem like a triumph of hope over experience.

If they really wanted to help poor people in the developing world, they would junk the current approach and instead use foreign aid as a reward for good policy (as measured by getting higher scores in the Economic Freedom of the World index).

But they are pursuing the opposite approach.

Mary Anastasia O’Grady of the Wall Street Journal is not impressed by how USAID has been leveraging foreign aid to promote bigger government.

Here are some excerpts from her column on how the bureaucracy is using its supposed anticorruption project as a tool to help the left take power in Guatemala.

Some Americans think of foreign aid as nothing more than money down the drain. If only. U.S. government spending in Latin America is being used by an activist bureaucracy to promote its leftist agenda. If it succeeds, U.S. taxpayers will end up subsidizing instability and economic misery.

A U.S. Agency for International Development “anticorruption” forum last week is the latest example. Featured participants included former Guatemalan Attorney General Thelma Aldana and former Guatemalan prosecutor Juan Francisco Sandoval. Both are living in the U.S. and have warrants for their arrests for alleged corruption pending at home. …Rep. Norma Torres (D., Calif.), a champion of the Guatemalan left, was also a panelist at the USAID event, which brings us to the forum’s common denominator: a political agenda…to clear a path for Guatemala’s Jacobins. …Your tax dollars at work.

P.S. During the era of the “Washington Consensus,” there were people in the foreign aid establishment who understood that free markets and limited government were the only effective way of helping poor nations. Today, by contrast, international organizations openly push for bigger government.

This video show why groups such as the IMF and OECD are wildly wrong.

Creating a Blueprint for National Cancer Programmes: a Race Supported by the IAEA, IARC and WHO across the Globe
IAEA Reviews Uganda’s Nuclear Power Infrastructure Development