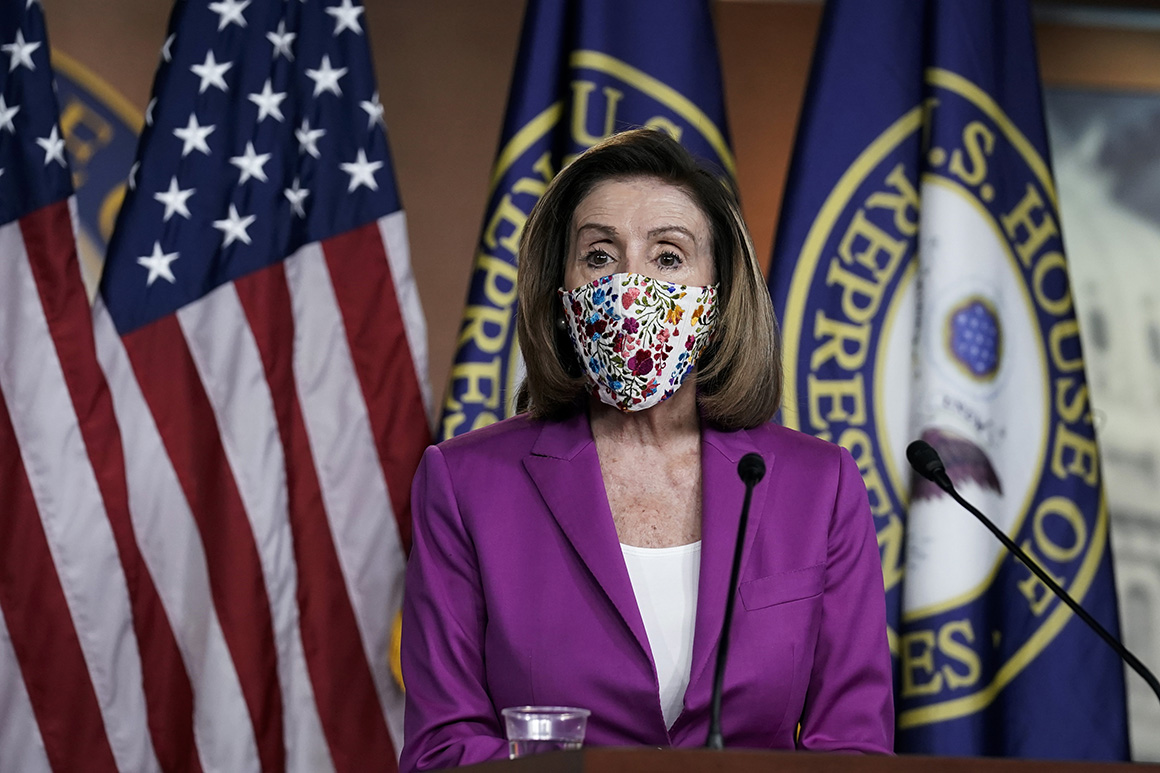 Speaker Nancy Pelosi and senior Democrats are still weighing whether to impeach President Donald Trump next week, concerned that the resulting Senate trial — all but certain to end in acquittal — would hamstring the first critical weeks of Joe Biden’s presidency.

Pelosi and her leadership team discussed several options for holding Trump accountable for inciting a deadly riot at the Capitol during a two-hour call Saturday night. Several top Democrats, including House Majority Whip Jim Clyburn — a close Biden ally — raised concerns that any effort to quickly confirm Biden’s Cabinet nominees or pass a major coronavirus relief package would be delayed for weeks by a Senate impeachment trial.

Democrats were not taking impeachment off the table, but the leadership team spent Saturday night batting around several potential scenarios for the coming days, including impeaching Trump in the House midweek but not immediately sending the article of impeachment to the Senate, which would initiate an immediate trial. Pelosi took similar steps after Trump’s first impeachment in 2019.

The party’s dilemma is that while the vast majority of Democrats are prepared to vote next week to remove Trump from office, key parts of the caucus have also become acutely aware that impeachment would pose complications for Democrats’ agenda. But failing to take action is also not an option, with furious lawmakers eager to exact punishment for the president’s role in the attacks on the Capitol on Wednesday, which resulted in five deaths.

Pelosi told members in a letter Saturday night that they should prepare to return to Washington next week. But her missive made no mention of impeachment nor the push for the 25th Amendment, noting only that discussions were ongoing about how to proceed.

“It is absolutely essential that those who perpetrated the assault on our democracy be held accountable,” Pelosi wrote. “There must be a recognition that this desecration was instigated by the President.”

Democrats will likely need to make the decision within the next 24 hours, since members will require notice to return to Washington.

A group of Democrats, led by Reps. David Cicilline (D-R.I.), Jamie Raskin (D-Md.) and Ted Lieu (D-Calif.), has drafted a formal impeachment resolution, which they plan to introduce Monday. The measure would impeach Trump for high crimes and misdemeanors “by willfully inciting violence against the government of the United States.”

That resolution had more than 185 cosponsors as of Saturday night — nearly the entire Democratic Caucus — but no Republicans.

Still, if Democrats did move to impeach, the effort isn’t expected to result in Trump’s ouster with just 11 days left in his term. The Senate likely wouldn’t even begin Trump’s impeachment trial until after Biden’s inauguration on Jan. 20. Even then, it’s not clear if any Senate Republicans would join with Democrats to convict Trump.

Democrats began discussing the possibility of impeachment the same day that a pro-Trump mob invaded the Capitol on Wednesday, fatally injuring a police officer, terrorizing lawmakers and staff, and bringing an hourslong halt to Congress’ effort to certify Biden’s Electoral College victory. In an hourlong speech before the riots, Trump urged his supporters to march to the Capitol, saying “you’ll never take back our country with weakness” and declaring he would “never concede.”

“The president of the United States incited his supporters, these violent protesters, to storm the Capitol, disrupt that process to try to prevent it from happening, so he would remain in office,” Cicilline said Saturday.

If Pelosi moves ahead, the decision would set off an expedited legal and legislative process that Democrats are scrambling to finalize. But with less than two weeks until Biden takes the oath, Democrats will need to condense months of preparation, arguments and proceedings into a matter of days.

One of the House’s architects of the 2019 impeachment said the case against Trump is so strong — and so public — that the House could justify moving at lightning speed if it chooses.

“The president incited insurrection after working his followers into a frenzy with lies about the election. He sicced them on a coordinate branch of government. If that’s not a high crime and misdemeanor, I don’t know what is,” said Norm Eisen, who advised Pelosi and the House Judiciary Committee during the first Trump impeachment. “This is a case where Congress can move quickly, the House can move quickly if it chooses to.”

During the first impeachment, Eisen was among those who advocated ensuring Trump had ample opportunities to rebut evidence and present his own case. But this time, he says, Trump was so blatant in his incitement of violence, built on a monthslong campaign to mislead supporters the election was stolen, that a lengthy investigation is unnecessary.

“What more do you need?” he wondered.

With few exceptions, the House Democratic Caucus has been in lockstep behind the push to impeach Trump. Still, a growing number of Democrats began to privately raise concerns Friday and Saturday that impeaching Trump could undermine the start of Biden’s presidency, noting that the Democrats’ push now looked doomed in the Senate.

Other Democrats have raised concerns that impeaching Trump just before he leaves office could make him a martyr to his supporters and empower him further. And others still are wary of gathering at the Capitol for a highly charged impeachment process that could present another security risk days after this week’s riot.

“We would rather not be doing this. We’re on the eve of a new president. And we’re excited about that,” Cicilline said on CNN, acknowledging those concerns. “But we simply can’t say, you know what, just let the 12 days pass, let it go, it’s no big deal.”

The few Republicans who have indicated openness to impeachment, such as Sen. Ben Sasse (R-Neb.), said they first wanted to see what kind of process the House undertook. Sen. Pat Toomey (R-Pa.) told Fox News on Saturday that he believed Trump “committed impeachable offenses” but said he doesn’t know if the process is “possible or practical” at this juncture. Sen. Lisa Murkowski (R-Alaska) has called for Trump to resign but has not tipped her hand on impeachment yet.

Multiple House Democrats have spent the last 48 hours phoning their GOP colleagues, some of whom are personal friends, imploring them to consider voting to impeach Trump. But those pleas have been largely fruitless, several lawmakers and aides said.

Rep. Adam Kinzinger (R-Ill.) is considered likely to vote for it, though it is not certain, according to several people familiar with the conversations. Rep. Fred Upton (R-Mich.) may also consider voting yes, according to one source.

Rep. Chrissy Houlahan (D-Pa.), who belongs to the bipartisan Problem Solvers Caucus, said she has tried and failed to persuade several Republicans that she “was hopeful would fall on the right side of all this.”

“That, to me, is inexcusable.”

The Democrats’ dayslong process would be a sharp break from every impeachment in history, including Democrats’ 2019 impeachment of Trump, which stretched more than three months in the House alone.

Democrats, at the time, emphasized how crucial it was to afford multiple opportunities for Trump to have due process and the ability to rebut charges against him. It’s unclear whether Trump will be given those same opportunities this time — and whether Democrats intend to engage any of the lawyers who represented him last time.