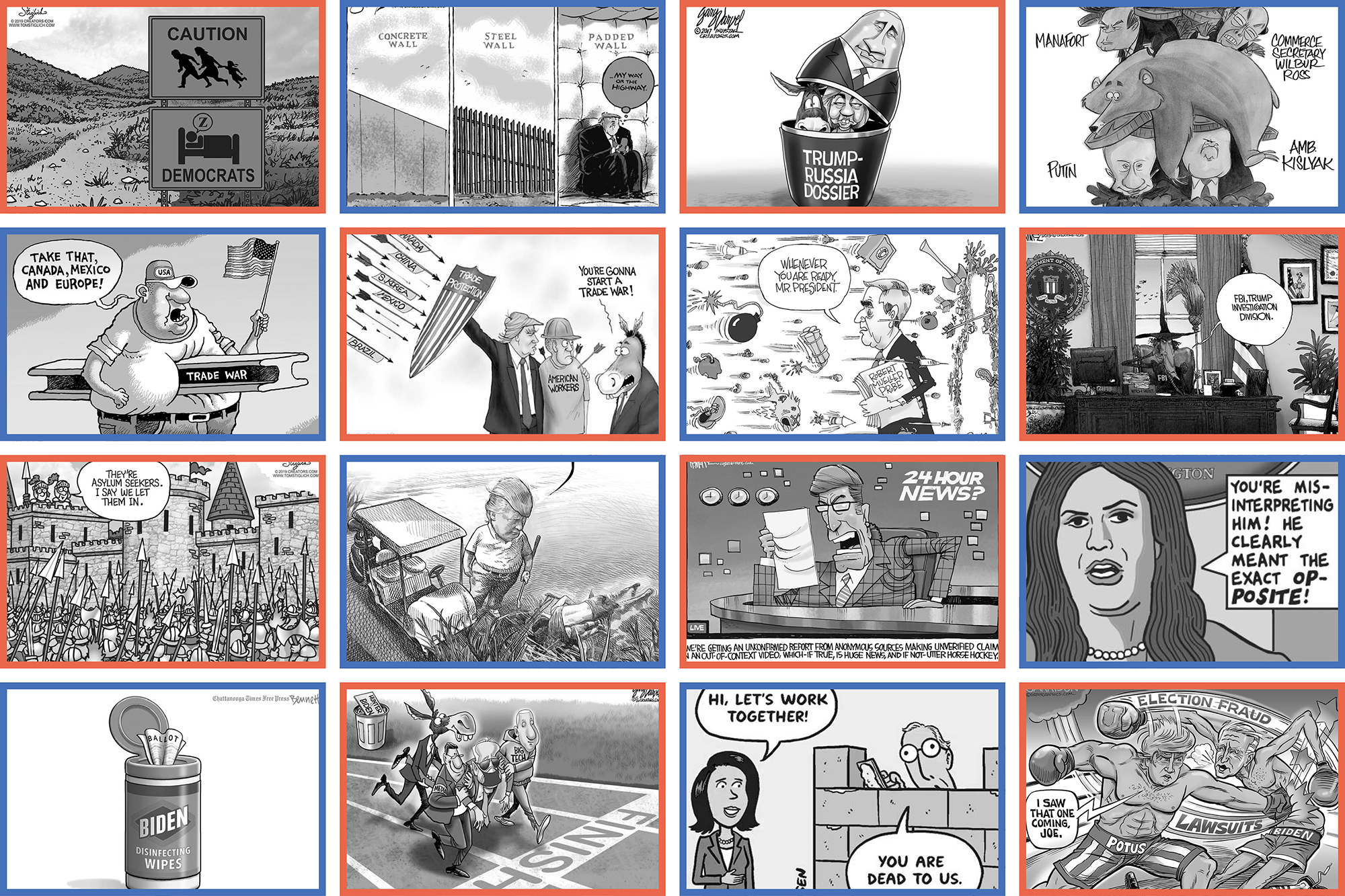 The past four fractious years have split us in two. Americans now live on two completely different political planets, with two seemingly irreconcilable points of view. If you’re a Trump supporter, you saw his presidency as four awesome years of owning the libs, beating back the Deep State and watching the greatest president since Abraham Lincoln make America great again. If you’re not, you just lived through four hellacious years of watching norms, laws, the country’s standing in the world—even the foundations of democracy itself—be devastated by an amoral narcissist who didn’t care how much damage he left in his wake.

Editing POLITICO’s Cartoon Carousel, a weekly compilation of cartoons from across the political spectrum, I’ve seen the hardening of these divides in real time. As liberal cartoonists sketched Trump’s presidency as a mounting series of horrors, their counterparts on the right turned the celebrity businessman into a kind of crusading folk hero. The differences were never more extreme than they were last Wednesday, as a band of pro-Trump rioters stormed the U.S. Capitol to try to stop Congress from certifying the election results.

Cartoons usually have a special way of enraging partisans, but they can also do the opposite—offer an opportunity to consider what our estranged, but still fellow, Americans are thinking and feeling. Leaving aside the question of what’s actually based in reality, we’ve created a visual timeline of these tumultuous years that hopefully offers a window into these two opposing views—the red planet versus the blue planet—and just how far apart they are.

Trump takes office with a “drain the swamp” message, and falsely claims to have the biggest inaugural audience in U.S. history. The next day, enormous crowds protesting the president at the Women’s March eclipse his inauguration’s attendance.

As the FBI investigates whether the Trump campaign colluded with Russia to influence the 2016 election, many Democrats seize on the Steele dossier, a shocking political opposition report funded by the Democratic National Committee and Hillary Clinton’s campaign that alleges Trump has extensive ties to the Russian government and cooperated with Moscow to damage Clinton during the campaign.

After a counterprotester is brutally killed during the white supremacist “Unite the Right” rally in Charlottesville, Trump lays blame for the violence on both sides and says that there were also “very fine people, on both sides.”

Trump announces sweeping tariffs on steel and aluminum imports and on other goods from China, Canada, Mexico, the European Union and Japan, among other countries.

The commander in chief and the North Korean leader trade threats, with Trump warning that more threats from Kim “will be met with fire and fury like the world has never seen.”

As Trump tries to shut down the investigation into his campaign’s possible collusion with Russia, his allies brand the probe a “witch hunt.”

Trump demands Congress greenlight an additional $8.6 billion in new funding for his signature policy, the wall—more than six times what Congress set aside for border projects the previous year.

Trump continues his crackdown on illegal immigration, promising to send thousands of asylum seekers back to Mexico. Meanwhile, a poignant image of a father and daughter who drowned trying to cross from Mexico to the United States spreads across social media.

While the left seized on the outright falsehoods and wild spin coming from the White House podium, the right chafed at what they perceived as unfair, overhyped coverage from cable news.

Democrats begin impeachment proceedings against Trump, and (most) Republicans fight them the whole way.

A pandemic arrives. Trump supporters accuse Democrats of overhyping it; anti-Trumpers accuse the president and anti-lockdown protesters of making it worse.

After George Floyd is killed by a policeman, anti-racist protests erupt across the country. While the protests are overwhelmingly peaceful, some conservatives focus on incidents of looting in some cities. Liberals, meanwhile, call out the armed far-right agitators and private militia members who showed up, in some cases, to encourage violence.

Many see the anti-racist movement sweeping the country as long overdue; others fear its consequences.

In September, Trump says of the staggering death toll from Covid-19, “it is what it is.”

On November 3, 2020, Americans cast their ballots to determine our next president.

After Trump’s loss, his allies refuse to accept defeat. With the country seemingly as divided as it’s ever been, many fear what will come in the next four years.

Encouraged by the president, a mob of Trump supporters stormed the Capitol to stop Congress from certifying U.S. presidential election results in favor of Biden.

Teacher Unions vs. Students
Digital media fuel global protests but can be used against them