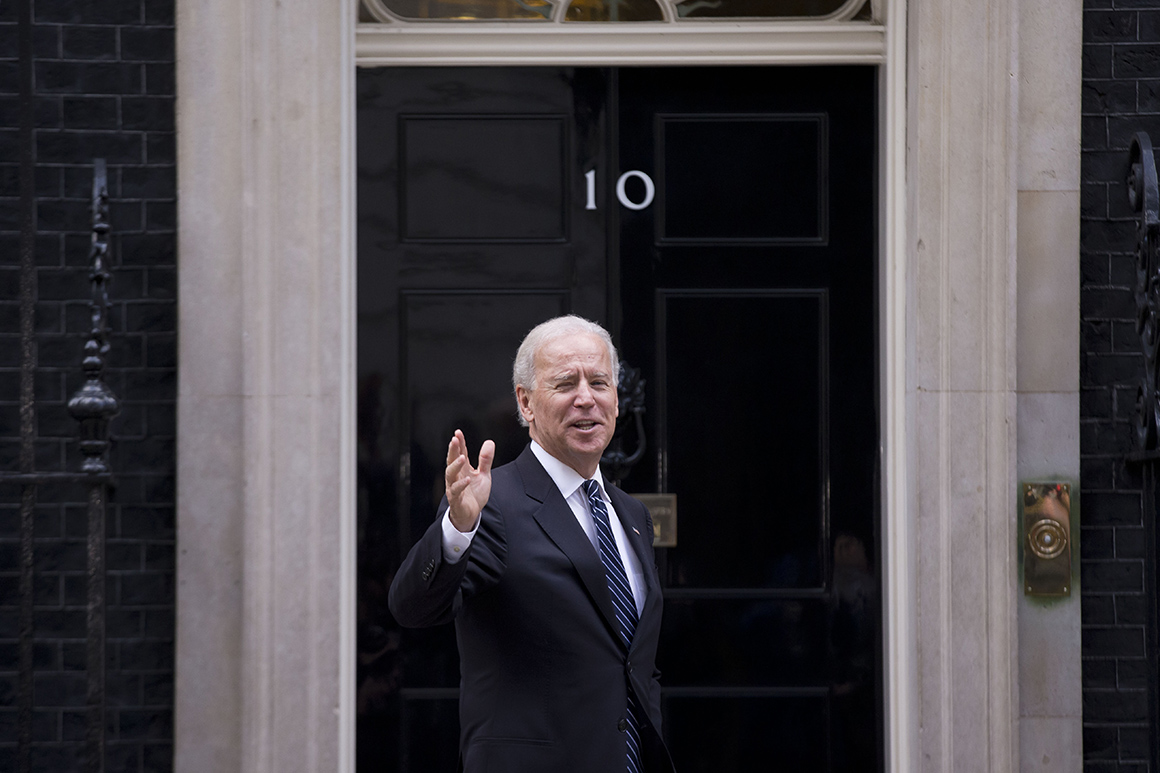 Although the U.K. has now sealed a trade deal with the European Union, covering $900 billion in tariff-free goods and services annually, the British prime minister’s hopes for a new arrangement with the United States are confronting the reality of a transatlantic relationship that is now anything but special.

Johnson allies fear his courtship of Donald Trump is now a liability in a Democratic Washington, along with his advocacy for a break with the EU against the advice of Trump’s predecessor. And while Biden’s tight-lipped transition team won’t reveal its plans for the U.K., interviews with 16 officials and former officials on both sides of the Atlantic make clear that Brexit has changed the dynamic.

“When you wanted to get something done with Europe, you made the first or perhaps second call to London,” said Charles Kupchan, who served as a senior National Security Council European affairs official in both the Obama and Clinton administrations. In 2021, “you’re still going to call London, but that call will be lower down in the queue. Britain doesn’t have a seat at the table anymore,” thanks to Brexit, he said.

Other Democrats speak in wistful terms about a relationship Winston Churchill once described as “fraternal.” “London will still be a player” and “we will always look to the U.K. as an ally,” are common refrains. But it’s the power corridors of Brussels, Paris and Berlin, not No. 10 Downing St. and Whitehall, that increasingly command Washington’s attention.

While Democrats welcome Britain’s recent $22 billion defense spending increase, and plan close climate cooperation, “Biden is seeking to strengthen and renew ties with the EU, and Britain is not going to be a part of that,” said one person familiar with Biden’s thinking.

President Donald Trump had a sometimes rocky relationship with Johnson’s predecessor Theresa May, but his distrust of the EU and NATO meant London was always the White House’s preferred partner in Europe. In Johnson, a champion of Brexit, Trump saw a kindred spirit. London’s hoped-for dividend: a trade deal in 2021.

The Biden administration doesn’t plan to play along. “Boris Johnson needs a trade deal to show the domestic utility of Brexit,” the person familiar with the president-elect’s thinking said.

Biden’s team is promising only to review any trade deal chapters agreed with the Trump administration to ensure they are “in line with Biden priorities,” the person said, “taking domestic factors into account.”

“The first task is trying to get our house in order at home,” said James Clapper, director of National Intelligence under President Barack Obama. Based on his interactions with the Biden transition team, Clapper said, helping post-Brexit Britain “doesn’t appear to me to be real high on their priority list right now.”

It’s not hard to see why: The sheer number of domestic challenges that will occupy Biden during his first 100 days will overshadow British efforts to secure a fast-track trade deal in that same timeframe.

“I’d say the best case scenario for a deal is 2022,” said Lewis Lukens, who served as U.S. deputy ambassador to the U.K. under Presidents Trump and Obama.

Kupchan agrees that London will have to wait until the second year of Biden’s team being in place, given the lack of a clear Democratic majority in the Senate and a wafer-thin margin in the House. “There’s an important conversation to be had on broader economic issues, but not on bilateral trade,” he said.

Politically, it would be “quite a big blow” for the U.K. if a trade deal can’t be secured quickly, said one former senior British diplomat. But in economic terms, it would hardly be noticed. The U.K. and U.S. were each other’s biggest investors in 2018 but the proposed deal would add only about $10 billion to the combined $23 trillion U.S. and U.K. GDP.

Some leading politicians from Britain’s ruling Conservative party think the deal is a transatlantic distraction. Tom Tugendhat, chair of the U.K. Parliament’s foreign affairs committee told POLITICO he thinks the U.K. should instead focus on getting the U.K. and U.S. to join the Trans-Pacific Partnership, an 11-country trade bloc including Japan, Canada and Australia, designed in part to counter China’s growing economic leverage.

The Obama administration helped negotiate an early version of that deal before President Trump withdrew from it. “We should be working with the U.S. on global regulatory reform, carbon pricing, and defending the rules-based system against China,” Tugendhat added, echoing what Biden’s transition team told POLITICO.

With the U.K. serving as G-7 president and hosting the U.N.’s annual climate conference in 2021, Democrats are keen to prioritize issues from Covid-19 to climate to global economic recovery, ahead of a trade deal.

The U.K. government isn’t ready to talk about “Plan B” for the deal, but a spokesperson acknowledged the challenge ahead: "securing a comprehensive deal that matches the depth of the U.K.-U.S. trading relationship is more important than meeting any particular deadline," the spokesperson said.

The timeline for a trade deal in 2021 is indeed daunting. USTR must notify Congress of a pending agreement before April 1 in order for it to be signed before congressional fast track authority expires on July 1. Further complicating matters, the last formal U.S.-U.K. negotiations ended October 30, meaning progress is limited to technical discussions during the transition. Meanwhile, political staffers at USTR have been blocking meetings throughout December between the Biden transition team and career officials, potentially hampering Biden’s ability to begin work immediately upon his inauguration.

To chime with Biden’s team, Britain is positioning a trade deal as an economic recovery tool. “This agreement would support both of our economies to build back better from Covid-19,” said a U.K. government spokesperson, who described the talks as being “at an advanced stage, with a significant proportion of legal text agreed.”

Several draft chapters of the deal are close to final, according to negotiation documents seen by POLITICO, including texts on small and medium-sized businesses, investment and digital services. But significant differences remain including on pharmaceutical regulation, textiles and intellectual property.

In the view of many Democrats, Johnson bet too heavily on Trump. “The [U.K.] government continued to believe Trump was going to do favors for them and that hasn’t panned out. The trade deal was going to happen in a matter of weeks, then months, and it’s now four years later and it hasn’t happened,” said a senior former American diplomat.

It was only after the U.S. Trade Representative published his trade deal wish list in 2018 that Johnson realized there would be no favors from Republicans. Having stacked his Cabinet with relatively inexperienced Brexit supporters, with marching orders to deliver Brexit above all else, Johnson’s team “doesn’t have the relationships they might need with a new Democratic administration,” the former diplomat said.

The U.K. government insists that’s an unfair reading of the situation. “From the outset, we have engaged with U.S. partners on a bipartisan basis — at the federal and state level,” a government spokesperson said. British diplomats also say they have long standing links with Katherine Tai, Biden’s pick for USTR.

That’s counted for little so far in the transition: Biden’s team is “hyper-disciplined” about not engaging with foreign officials before inauguration, according to both British officials and Democrats POLITICO spoke with. 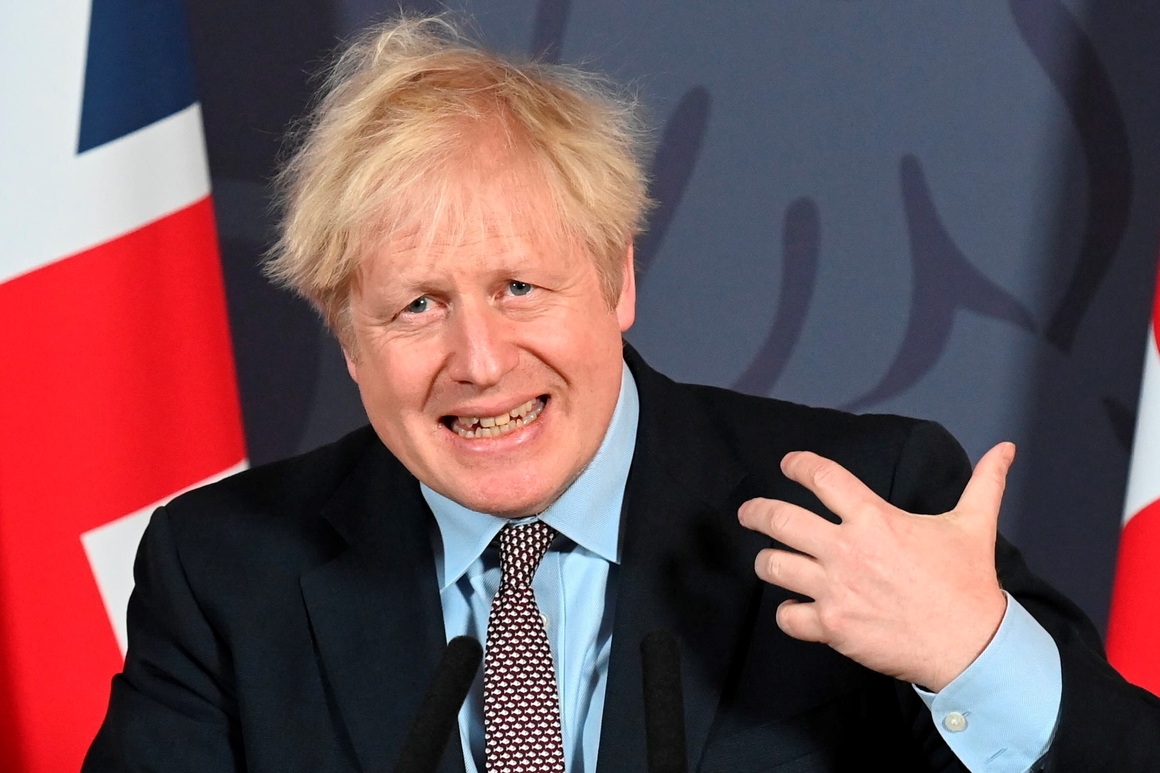 Johnson and his allies may instead have to rely on President-elect Biden’s trademark capacity for not holding grudges.

So far, British officials are breathing a sigh of relief that Biden’s team isn’t publicly buying into the sharp, public criticisms former Obama administration officials have made about Johnson.

But privately, Democrats continue to take offense at Johnson’s often inflammatory rhetoric, including a racially charged description of President Barack Obama as America’s “part-Kenyan president” in 2016, raising the matter in discussions with a range of British officials. Biden himself described Johnson at a 2019 fundraiser as “a physical and emotional clone” of Trump.

Yet those close to Biden insist “it’s not helpful to over-personalize things,” according to a person familiar with his thinking. “You have perfect couples in the mold of Bill Clinton and Tony Blair, or Ronald Reagan and Margaret Thatcher, and then there’s pairings where the personalities don’t mesh but they make it work,” the person said, describing the likely Biden-Johnson relationship.

While “there’s not a lot of warmth,” a former American ambassador admitted, the pair’s differences “will be water under the bridge, frankly, because the U.S. wants the U.K. to thrive.”

While President-elect Biden and his team respect Britain’s choice to leave the EU, Democrats nonetheless tend to view Brexit as a poorly executed policy.

Secretary of State-designee Antony Blinken has called Brexit a “total mess,” while Kupchan called it “an act of self-isolation that will inevitably diminish Britain’s weight in the world.”

They also lament that Britain’s departure from the EU will make it harder to influence the unwieldy 27-member club. Britain’s open economy often acted as a counterweight to the protectionist instincts of France and Germany. “The U.S. lost its most effective EU member,” said a former senior American diplomat. “Now life for the U.S. becomes more complicated. We have messier coalitions to deal with.”

Kupchan said Brexit merely accelerates a trend since the end of the Cold War, of Washington engaging more directly with Paris and Berlin. Paris has the edge because of its defense investments. “What will really irritate the U.K. is we will now return to engaging the EU as an essential partner, and it’s fair to see France as on the up,” said a former senior American diplomat. “France is the one that still aspires to be a global actor and has more ambition,” said Ellen Laipson, director of George Mason University’s Center for Security Policy Studies.

Senior Democrats back Biden’s wish to prioritize better relations with the EU. Sen. Chris Murphy (D-Conn.), a close Biden ally, wants a trade deal with the EU to take priority over the U.K. deal. Richard Neal (D-Mass.), chairman of the powerful House Ways and Means Committee has also urged the incoming administration to renew trade negotiations with the EU.

Biden will continue to follow the U.K.’s negotiations with the EU, particularly how peace arrangements in Northern Ireland are handled. “Folks are watching what’s happening, where that lands,” said a person familiar with the president-elect’s thinking.

While the Biden team welcomes the U.K. government’s Dec. 8 recommitment to uphold the Good Friday Agreement in full, that move doesn’t guarantee or speed up a bilateral trade deal, which remains a “separate discussion,” the person said.

In other words, Britain will have to earn its trade deal.

“I think the ball is really in the U.K.’s court,” said Lukens, the former ambassador. “Whether Boris and his team are capable of developing a worldview beyond Brexit remains to be seen.”