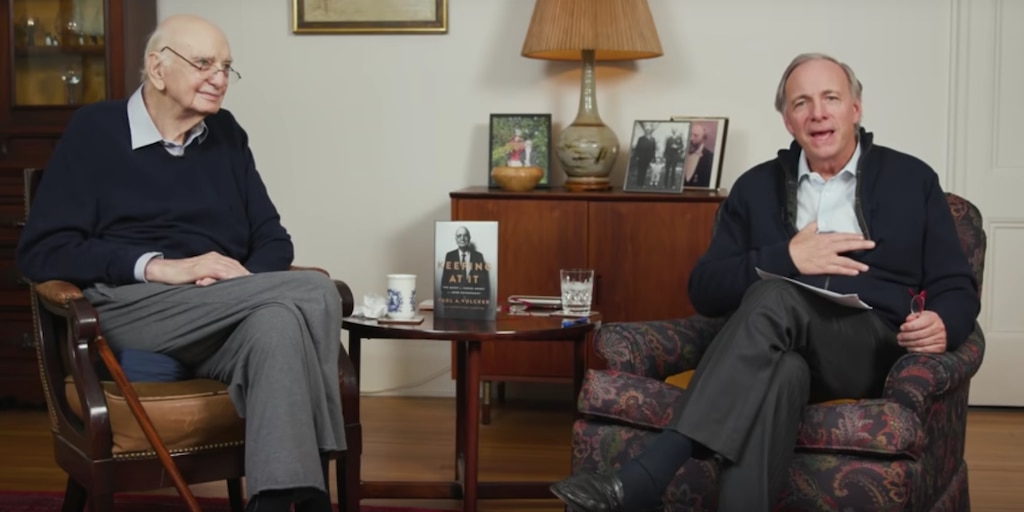 Dalio says that the greatest American he’s ever known is the Paul Volcker, the former chairman of the Federal Reserve who died on Sunday, aged 92.

In a LinkedIn post, late on Monday, Dalio wrote:

“For the nearly 50 years that I watched him or knew him personally, I found Paul to be a man of unwavering character and capability who put working in the service of our country above all else, always putting doing the right and difficult things ahead of the expedient and partisan things.”

“I knew him personally as a man who had great wisdom, humility, and classic heroism in which he sacrificed his well-being for the well-being of others.”

Volcker, who was Fed chairman between 1979 until 1987, was famed for his approach that helped to steady the American economy from high inflation.

Ray Dalio is one of the most successful business people in America. He’s worth about $18.7 billion, according to Forbes, and his hedge fund Bridgewater Associates is the biggest in the world, with $150 under management.

Of his time as Fed Chairman, Dalio said of Volcker: “In 1979-84, I watched him break the back of inflation, which was essential for our economic system’s survival and required great character to do the right thing under strong criticism because tightening monetary policy meant a lot of people had to suffer a lot.”

Dalio added that during that time he felt Volcker was the most powerful person in the world due to his position.

After leaving the Fed, Volcker continued to be a prominent financial advisor and economic voice, chairing the Independent Committee of Eminent Persons which looked to find Holocaust victims financial accounts in Swiss banks. It found 46,000 accounts opened most likely by Jews during the Holocaust.

Volcker also went on to serve as an advisor to the Obama administration during the financial crisis, once again giving Wall Street Bankers his no-nonsense approach — “Wake up, gentlemen, your response is inadequate.”

Dalio earlier this year interviewed Volcker talking about the three principles Volcker used that led his career. Of those were effective governance, good economization of family spending, and a strong class of civil servants — all in line with his strong government approach to economics.

Dalio, in the post, also said: “After he left the Fed in 1987, I watched him be chosen to oversee the recovery of Holocaust victim assets from Swiss banks because the world considered him to be the most capable and least biased person to tackle this highly contentious issue.”

“After that I watched him take on and handle the highly politically-charged investigation of corruption in the UN oil-for-food program in Iraq, once again because he was the most principled and capable person who everyone believed would do the right things rather than politically expedient things,” Dalio wrote.

“Even after he knew that he was approaching his end, when we would talk, he never worried about himself as much as he worried about the well-being of our country and those who served it.”

Read More: Billionaire investor Ray Dalio sat down with his idol, Paul Volcker, who laid out the 3 principles that have guided his legendary career

Read More: Billionaire investor Ray Dalio says inviting conflict is one of his keys to success