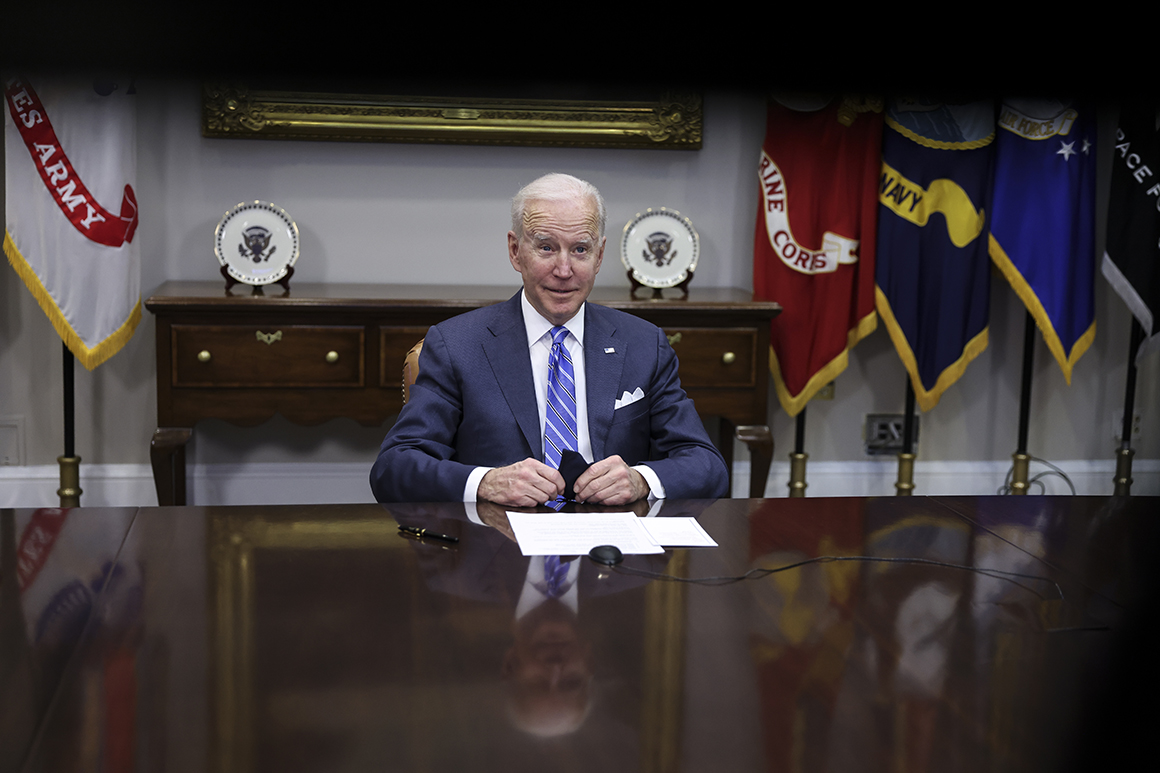 There’s a war on The Muppets. And “The Cat and the Hat!”
But Biden is busy. He has no time for all that.

Over the past few weeks, Republicans have simmered over the “cancellation” of seemingly innocent family favorites, including the venerated Mr. Potato Head toy and Dr. Seuss books. Glenn Beck has likened it to fascism. Fox News has covered it obsessively. In recent days, conservative legislators have made speeches at confabs and in the halls of Congress, warning about what they describe as out of control PC culture.

And yet, even as it becomes all consuming on the right, White House advisers and Biden aides insist they’re unbothered by the culture-wars-du-jour. Unbothered, they say. They respond with a snore. (Okay, we’re done).

“I don’t think there is any danger in ignoring a debate on Mr. Potato Head and Dr. Seuss,” said John Anzalone, a Biden adviser and campaign pollster.

Anzalone contends there’s no benefit to engaging in “meaningless” topics, and that there may indeed be an upside in disregarding them as the Biden administration and Democrats close in on a massive Covid-relief package, amid more than 500,000 deaths from the pandemic. “The Republicans are in danger of ignoring getting Covid vaccine distribution money to states, funding to schools to reopen and checks in the pockets of struggling Americans,” he added.

Other aides to the president agree, pointing to the often-fleeting nature of the stories burning up conservative airwaves as proof there’s no need to weigh in.

The divide over what the right sees as “cancel culture” and what the left considers “concern trolling” is somehow growing larger in the post-Trump political landscape. And neither side is showing signs of retreating. While Biden World may find it all a tiresome distraction, Republicans see a salve. Lacking power and a unifying political message, a relentless focus on “cancel culture” has proven to be a galvanizing force for their base.

“At the end of the day I think it unifies the party but expands it into the area we need to — the suburban moms, the college educated men that we struggled with in 2020, there’s common ground with these constituencies” said Mercedes Schlapp, senior fellow American Conservative Union Foundation and a former Trump White House aide. “We’re the party of common sense and we’re not going to be the party of continuously policing what our children are reading and not for this cancel culture mob to decide.” 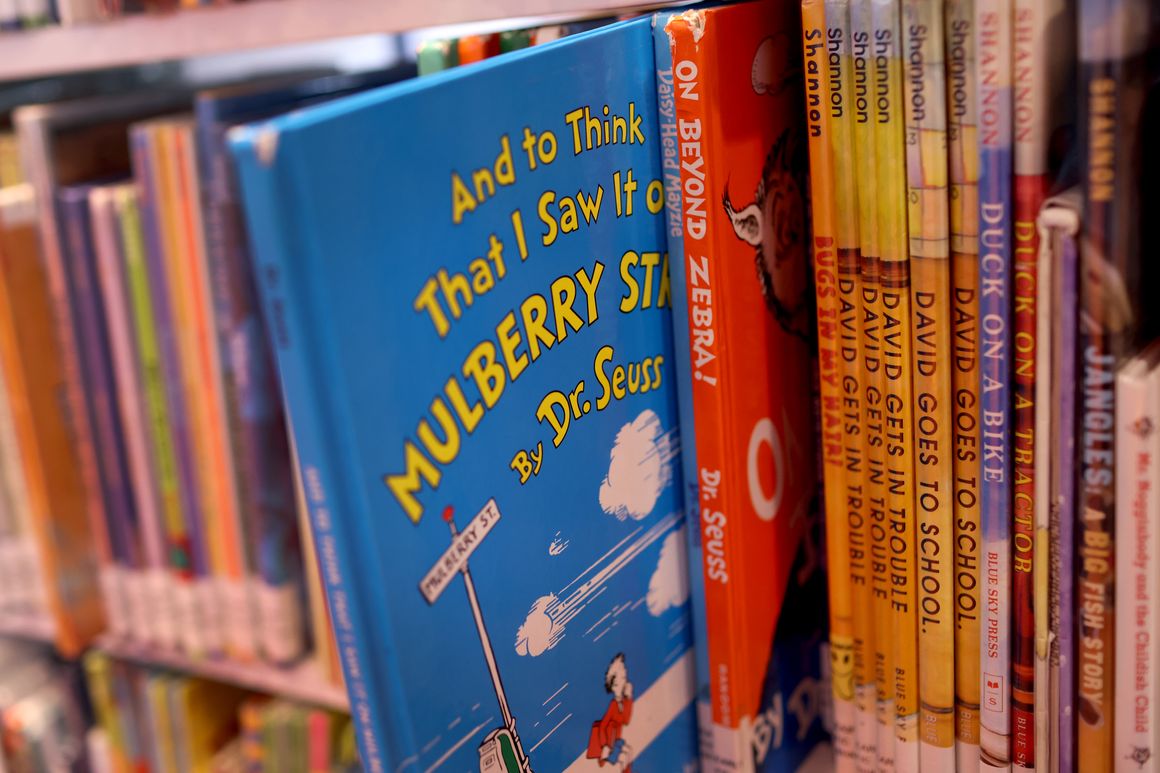 On Thursday, Republicans opened a new front in the battle, one that centered on Biden’s use of the phrase “neanderthal thinking” to describe the rationale among leaders in GOP-run states who are lifting their Covid-19 restrictions.

Sen. Marco Rubio (R-Fla.) trolled the left by calling on the president to apologize for offending people whose very, very, very, very distant ancestors were of the archaic human species. He suggested Biden “seek training on unconscious bias.” And Sen. Marsha Blackburn (R-Tenn.) even took to the airwaves to defend the reputation of cavemen and women.

“Neanderthals are hunter-gatherers, they’re protectors of their family, they are resilient, they’re resourceful, they tend to their own,” Blackburn told Fox Business. “So, I think Joe Biden needs to rethink what he is saying.”

The fights metastasize so swiftly that it becomes, at times, hard to recall how they started. In the case of Dr. Seuss, the Biden administration omitted the famed children’s book author in a proclamation for Read Across America Day, which was intentionally founded on the good doctor’s birthday. Then the estate of Dr. Seuss decided not to publish six of his children’s books because they included illustrations that the estate itself considered “hurtful” and “wrong.”

The topic quickly became a fixation of GOP lawmakers and conservative cable programming. On Tuesday, it was the primary focus on Fox News even as FBI Director Christopher Wray sat in the hot seat for a hearing on the Jan. 6 riots on Capitol Hill. All told, the network talked about it 60 times, according to a Washington Post tally.

House Minority Leader Kevin McCarthy even took the issue to the House floor during a debate on a voting rights bill introduced by Democrats. “First, they outlaw Dr. Seuss and now they want to tell us what to say,” McCarthy said.

For the White House, it’s been generally worth sidestepping. White House press secretary Jen Psaki punted when asked about why Biden did not include Dr. Seuss in his reading day announcement as former presidents Trump, Obama, and Bush did.

"The proclamation was written by the Department of Education, and you could certainly speak to them about more specifics about the drafting of it," Psaki said.

That’s not the only culture war in which Psaki has refused to engage. When asked about Biden’s neanderthal comment, she called it a "reflection of his frustration" with Americans refusing to follow public-health guidance. Earlier, she declined to directly respond when asked about Dallas Mavericks owner Mark Cuban’s announcement that his team would cease beginning games by playing the National Anthem — a policy on which he eventually reversed course.

The culture war playbook is a well-worn one for the GOP, especially when they are outnumbered in Washington. But the recent examples have taken a different form than those in the past. That was especially true in the Trump era when rather than being tied to a specific policy or politician, they often take the form of backlash to the perceived social pressure for political correctness.

During Barack Obama’s presidency, aides saw many of these “scandals” as being motivated by their dislike for him personally, or having to do with his race, or often a combination both. Incidents included photos of Obama not wearing a jacket in the Oval office (after no such pictures were snapped of George W. Bush over eight years) and the Obamas inviting the hip hop artist and actor Common to the White House as part of a poetry reading, which drew the scorn of Karl Rove and Sarah Palin. “Oh lovely, White House…” she said.

There was also the so-called Starbucks salute, when Obama informally saluted Marines while holding a cup of coffee in his raised hand.

“The not-so-subtle implication was ‘he’s part of the Other and he doesn’t belong here,’” said a former Obama White House official, describing many of the attacks as racist.

Today, much of the fracas doesn’t even involve Biden, or his administration, or his policy agenda. Instead, it involves things like corporate decisions around kids’ toys.

Last month, toymaker Hasbro announced that it was dropping the “Mr.” from its logo and branding in an effort to promote gender equality and inclusion. After an initial firestorm over the decision, the company clarified that both Mr. Potato Head and Mrs. Potato Head would continue to be sold under the names. Hasbro acknowledged the initial confusion. But by then the story had taken off. Rep. Matt Gaetz (R-Fla.), speaking at CPAC last weekend, mockingly referred to the Potato Head toy as “America’s first transgender doll.” 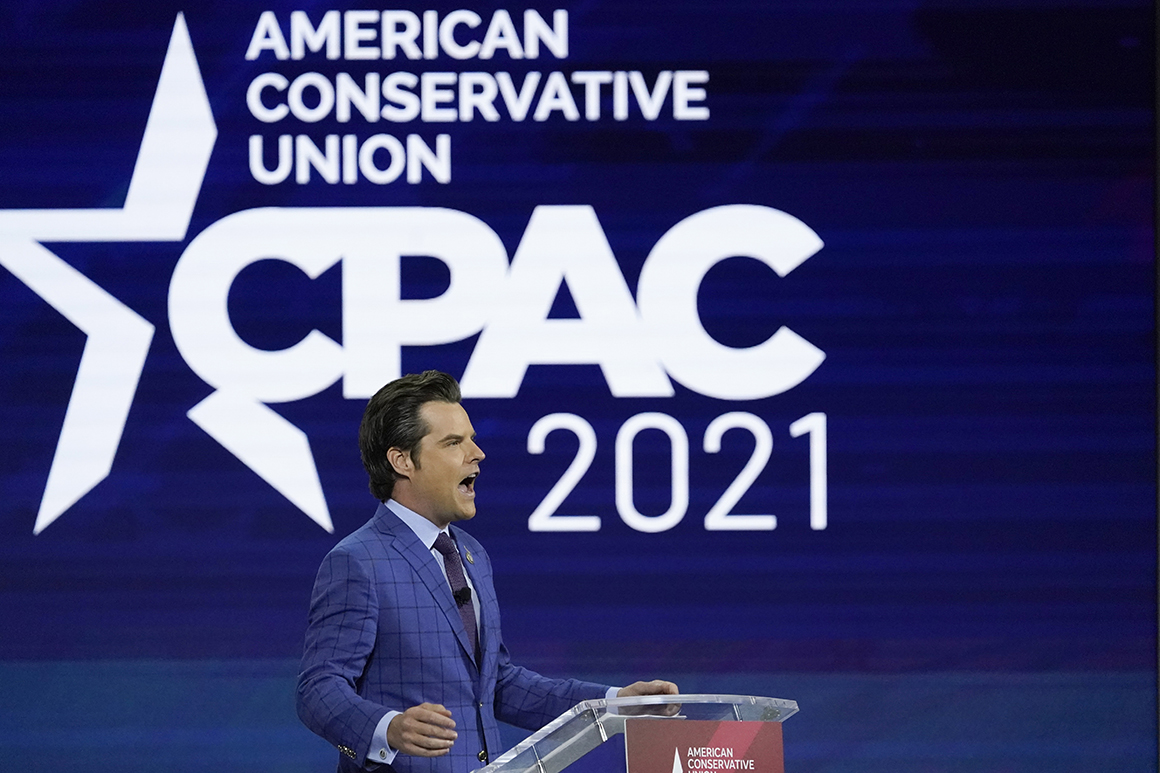 Republicans, split by warring factions, have found common ground in pushing back against “cancel culture.” “America Uncanceled” was the dominant theme of Conservative Political Action Conference this year, with Donald Trump and 2024 hopefuls like Sen. Ted Cruz, (R-Texas) elevating the issue along with topics like immigration, China, and climate change.

“Will this supplant the pandemic or the economy at the top of voters’ minds? No,” said GOP strategist Matt Gorman. “But it is a cultural touchstone for folks that shows where a party’s priorities are. Suburban parents seeing school districts banning a kids book or changing names of schools, but not getting kids in the classrooms is one way to infuriate them. They see them focused on the absolute wrong things.”

There are numbers that seem to bolster Gorman’s point. According to a new Harvard CAPS-Harris poll, a majority of Americans view “cancel culture” as a threat to freedoms in the U.S. Eighty percent of Republicans viewed it as a threat, compared to 48 percent of Democrats in the survey.

Pollster Frank Luntz said wielding “cancel culture” as a cudgel is “definitely” effective for rallying the GOP base.

“The delegitimization of Trump and his voters five years ago is what led to his election,” Luntz said. “The cancel culture by the left is exactly the same strategy, and it will cause the same result. It doesn’t matter if you are on the left or on the right: people will fight for their right to exist.”

Even those in the entertainment industry — one of the vanguards of the “cancel culture” wars — have fretted that it all might prove effective. “This is how Trump gets reelected, by the way, cancel Dr. Seuss, cancel Abe Lincoln. Melt down Mr. Potato Head’s private parts and throw them at the Muppets,” Jimmy Kimmel said in a recent show. “This is his path to victory.”

So, will Republicans succeed? Is it, in fact, 98 ¾ percent guaranteed? The White House doesn’t think so, as evidenced by the fact that an official there responded with a Seussian rebuttal of their own.

“Republicans may complain, but they’re still in thrall
To a President who acted like a Neanderthal

Instead of coming together, the flames they fan
When they should be working with Joe on the Rescue Plan

Cry, whine, and gnash their teeth as they may
It’s actually the Republicans who are in disarray!”