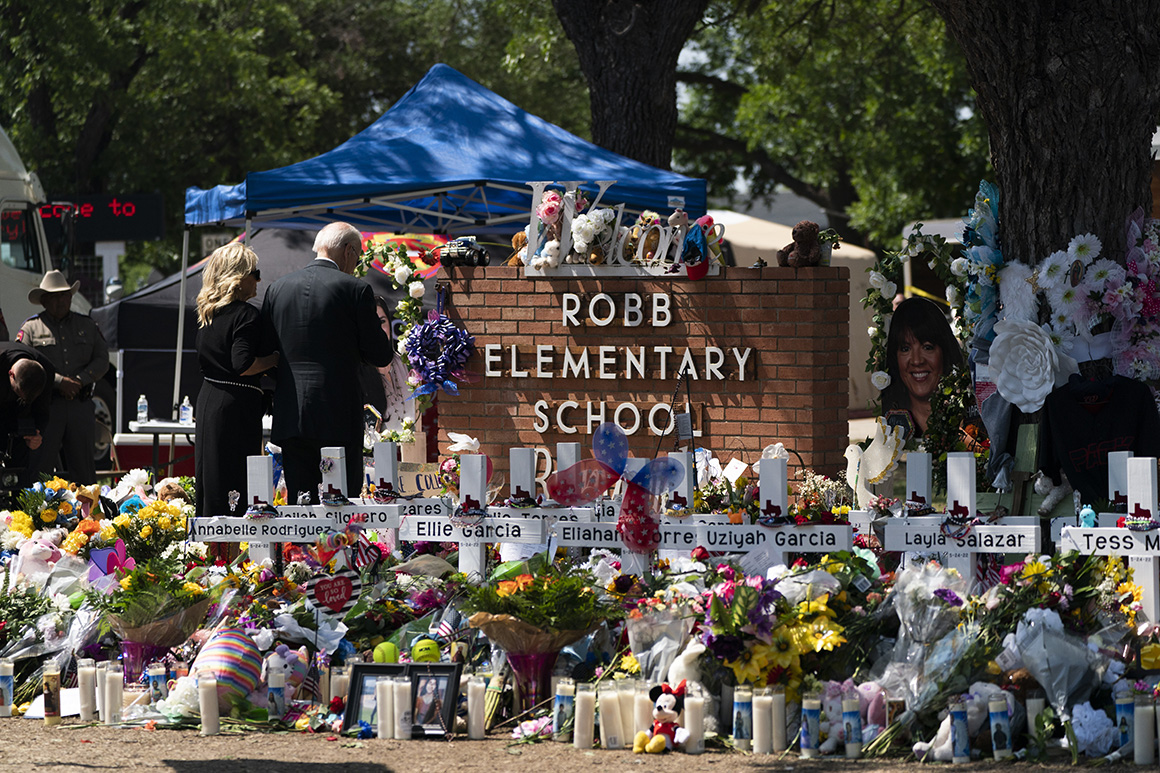 UVALDE, Texas — President Joe Biden and first lady Jill Biden offered comfort Sunday to a city gripped by grief and anger as they paid respects at a memorial to 19 students and two teachers slain during a mass shooting at a Texas elementary school.

The visit to Uvalde was Biden’s second trip in as many weeks to console a community in mourning after a staggering loss from a shooting. He traveled to Buffalo, New York, on May 17 to meet with victims’ families and condemn white supremacy after a shooter espousing the racist “replacement theory” killed 10 Black people at a supermarket.

Outside Robb Elementary School, Biden stopped at a memorial of 21 white crosses — one for each of those killed — and the first lady added a bouquet of white flowers to a pile in front of the school sign. They viewed individual altars erected in memory of each student, and the first lady touched the children’s photos as the couple moved along the row.

The shootings in Texas and New York and their aftermath put a fresh spotlight on the nation’s entrenched divisions and its inability to forge consensus on actions to reduce gun violence.

“Evil came to that elementary school classroom in Texas, to that grocery store in New York, to far too many places where innocents have died,” Biden said Saturday in a commencement address at the University of Delaware. “We have to stand stronger. We must stand stronger. We cannot outlaw tragedy, I know, but we can make America safer.”

After visiting the memorial, Biden arrived for Mass at Sacred Heart Catholic Church, where a teacher nearby held up a sign that said, “Mr. President, thank you for coming. I’m a teacher.” Later, the president planned to meet privately with family members at a community center and then with first responders at the airport before returning to Washington, the White House said. He was not expected to deliver formal remarks.

Mckinzie Hinojosa, whose cousin Eliahana Torres was killed Tuesday, said she respected Biden’s decision to mourn with the people of Uvalde.

“It’s more than mourning,” she said. “We want change. We want action. It continues to be something that happens over and over and over. A mass shooting happens. It’s on the news. People cry. Then it’s gone. Nobody cares. And then it happens again. And again.”

“If there’s anything if I could tell Joe Biden, as it is, just to respect our community while he’s here, and I’m sure he will,” she added. “But we need change. We need to do something about it.”

The Bidens’ visit comes amid mounting scrutiny of the police response to the shooting. Officials revealed Friday that students and teachers repeatedly begged 911 operators for help even as a police commander told more than a dozen officers to wait in a hallway. Officials said the commander believed that the suspect was barricaded inside an adjoining classroom and that there was no longer an active attack.

The revelation caused more grief and raised new questions about whether more lives were lost because officers did not act faster to stop the gunman, who was ultimately killed by Border Patrol tactical officers.

Authorities have said the shooter legally purchased two guns not long before the school attack: an AR-style rifle on May 17 and a second rifle on May 20. He had just turned 18, permitting him to buy the weapons under federal law.

Biden said Saturday that something had to change in response to the attack.

“I call on all Americans at this hour to join hands and make your voices heard, to work together to make this nation what it can and should be,” Biden said. “I know we can do this. We’ve done it before.”

Hours after the shooting, Biden had delivered an impassioned plea for additional gun control legislation, asking: “When in God’s name are we going to stand up to the gun lobby? Why are we willing to live with this carnage? Why do we keep letting this happen?”

Over the years, Biden has been intimately involved in the gun control movement’s most notable successes, such as the 1994 assault weapons ban, and its most troubling disappointments, including the failure to pass new legislation after the 2012 massacre at Sandy Hook Elementary School in Newtown, Connecticut.

As president, Biden has tried to chip away at gun violence through executive orders. He faces few new options now, but executive action might be the best the president can do, given Washington’s sharp divisions on gun control legislation.