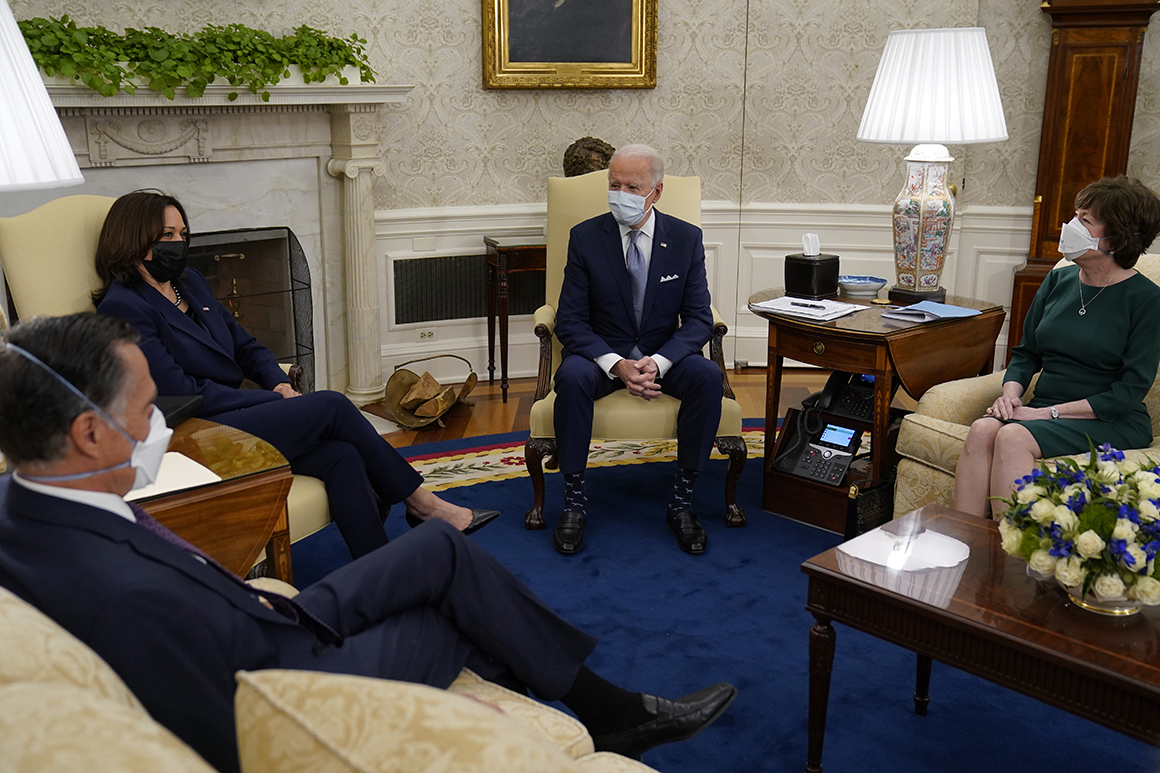 Joe Biden was eager to meet with Republican senators Monday to discuss Covid relief legislation. But the show of bipartisanship is likely to be just that — a show.

Advisers to the president say they are mindful of getting bogged down in talks with Republicans, whose offer didn’t even meet the president halfway on his $1.9 trillion package. And current White House aides who served in the Obama administration confess to being particularly wary after Republicans drew out negotiations and stonewalled much of the former president’s agenda.

Instead, the Biden White House is taking a fine-if-it-comes approach to bipartisanship, at least right now. They’re parading public polls and statements from state and local Republican officials to show that cross-party support for the plan already exists. They’re preparing to pass the bill with 50 votes in the Senate. And Biden aides are arguing that the popularity of the plan’s components — stimulus checks, expanded unemployment insurance and funds to bolster vaccine distribution — puts the onus on Republicans to support it, not on Democrats to subject it to extended negotiations.

Monday’s meeting at the White House was an early indicator that Biden’s team views outreach to Republicans as a willingness to talk, not necessarily a commitment to making major concessions. The meeting, which included Vice President Kamala Harris, was in line with Biden’s campaign pledge to try to work across the aisle. But it did not have the feel of serious, substantive give-and-take so much as a chance to explain current postures.

A Biden aide said the president pointed out the enormous gap between the Republicans’ proposal and his bill, remarking that he is not interested in making significant concessions. Biden, the aide said, made it clear that the conversation was important but he plans to push ahead expeditiously — reminding the senators of his experience with reconciliation, the procedural process by which bills can pass with a simple majority in the Senate.

“I think this is a good opportunity to show he was serious about working with Republicans,” said a former Biden aide in close touch with the White House, “but if they’re not willing to do what it takes, then we’ve got the votes to do it our way.”

The meeting came after a group of 10 Republicans, led by Sen. Susan Collins (R-Maine), sent a letter to Biden requesting a get-together and outlining their $618 billion stimulus counterproposal. Collins, who spoke by phone with Biden on Sunday, has a friendly relationship with the president from their years serving in the Senate together. And Biden has a history of persuading her to back massive stimulus bills, including the recovery act that he helped move through the Senate during the early weeks of the Obama administration. In his short time in office as president, Biden has phoned the Maine Republican three times.

"I wouldn’t say we came together on a package tonight,” Collins said after the meeting. “No one expected that in a two hour meeting. But what we did agree to do is to follow up and talk further at the staff level, amongst ourselves and with the president and vice president."

But Collins is just one Republican vote. Biden would need nine others if he were to try and pass his Covid recovery bill through a process other than budget reconciliation. Administration officials don’t imagine that those votes will be there if the bill moves measurably away from the GOP’s $618 billion office. And on Monday, the White House signaled confidence that it has the support it needs to move forward with just Democratic votes.

“While there were areas of agreement, the president also reiterated his view that Congress must respond boldly and urgently, and noted many areas which the Republican senators’ proposal does not address,” White House Press Secretary Jen Psaki said in a statement after the meeting. “He reiterated that while he is hopeful that the Rescue Plan can pass with bipartisan support, a reconciliation package is a path to achieve that end.”

Psaki pointed out that local and state officials, including Republicans and independents, health experts and the majority of Americans back the proposal. More than 400 mayors, including Republicans and independents, and local county officials sent letters to Congress urging lawmakers to pass Biden’s package, which includes $350 billion in direct relief to state and local governments. On Monday, West Virginia Gov. Jim Justice, a Republican and former President Donald Trump ally, urged Congress to “go big.”

“I have a sense they are leaning toward a larger bill because the people have spoken loud and clear. We need relief. We need a rescue that is more comprehensive and broad. You can’t keep piecemealing,” said Larry Johnson, a member of the DeKalb County, Ga., Board of Commissioners and first vice president of National Association of Counties, which has been in touch with Biden’s aides.

Biden’s team believes that the public will ultimately not care if he doesn’t give bipartisan negotiations a lengthy try and instead moves quickly to get his Covid relief bill through Congress. They argue that the benefits to the economy will outweigh voter trepidation over legislative processes.

A Brookings Institution study indicated the bill could boost GDP by 4 percent and return the economy to pre-Covid levels by 2021 while a separate Moody’s Analytics study found that it would create 7.5 million jobs this year.

“We think the $1.9 trillion is needed,” said Georges Benjamin, head of the American Public Health Association, who is in regular contact with the health experts at the administration. “Obviously you’re always stronger if you have bipartisan support to do it, but people are dying and the economy is falling apart and what we’ve done so far hasn’t fixed it. I don’t see the end yet unless we do something aggressive.”

Biden’s years in the Senate — and the promise of unity he campaigned on — had left some Democrats worried that he would be overly obsessive about striking deals with Republicans at the cost of a more progressive, fast-moving agenda.

While serving as vice president, Biden was often the one dispatched to the Senate to try to cut deals with Senate Minority Leader Mitch McConnell (R-Ky.) on tax cuts and spending levels, much to the chagrin of then-Senate Majority Leader Harry Reid and other Democrats.

“The concern is that they’ll spend too much time like the Obama folks did in the first couple of years, trying to figure out a way to work with Republicans,” said Jim Manley, a former top aide to Reid. “Now everyone understands that it’s almost impossible to cut deals with McConnell.”

But scanning the early actions of the current White House, Manley said he’s optimistic that both Biden and his aides learned a lesson from Obama’s tribulations. Although occasionally critical of Biden, Manley was bullish about the president’s current approach.

“It’s a smart move by the Biden folks to take the meeting with the [Senate Republicans],” said Manley, “but I think they’ve made it pretty clear that they’re also prepared to move quickly using alternative methods.”

— with reporting by Sam Stein