When I did my final assessment of Trump’s economic record, I gave him credit for cutting red tape in some areas, but also noted that he increased government intervention in other areas.

…there were some very positive moves on regulation, but they were partly offset by areas where Trump increased intervention (coal subsidies, property rights, Fannie/Freddie, and international tax rules, for instance).

I did give him credit, on net, for moving regulatory policy in the right direction. In other words, the good things he did regarding red tape outweighed the bad things.

But that’s a judgement call, in part because it’s rather difficult to measure the myriad forms of regulation from dozens of different bureaucracies, but also because there’s no agreement on how to measure success (is it a victory, for instance, to reduce the rate of increase in red tape?).

To see how this is challenging, let’s see what various experts wrote about Trump’s regulatory track record.

Yet overall the reality of regulatory elimination is rather unremarkable… The Administration has accomplished markedly little compared to what it has claimed. … in measuring levels of regulatory activity,researchers rely on a variety of sources of data, including overall pages in the Federal Register and the CFR,the incidence of new rules published in the Federal Register,and the number of actions listed in the semi-annual regulatory agenda. …The Code of Federal Regulations (CFR) is the authoritative source of all existing regulatory requirements on the books. …Growth continued in the Obama Administration to 185,053 pages in 2016. If President Trump’s claim to have eliminated 25,000 pages were correct, we would expect to see no more than160,000 pages in the CFR by now. But, quite to the contrary, the count as of the end of 2019 was185,984 pages—actually a somewhat greater number of pages, not fewer.

Here’s Figure 1 from the paper, which does confirm that there was not a 25,000-page reduction in red tape. 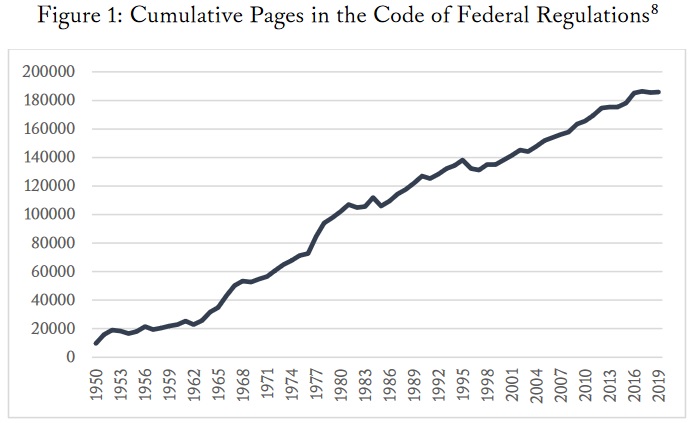 Though if you focus on the last couple of years, it is obvious that the rate of increase slowed significantly. Depending on one’s perspective, that is either a victory or a smaller defeat.

The authors do acknowledge that the number of pages isn’t even the right way to measure regulatory burden.

So they then examine the claim that the Trump Administration had more initiatives to reduce rather than increase red tape.

The bottom line, based on their assessment, is that Trump didn’t accomplish much, particularly when compared to what happened under Carter and Clinton.

For what it’s worth, Clinton was much more market oriented than most people realize. And Carter, while misguided in some areas, did a very good job on regulation.

So it’s not necessarily a knock on Trump to say he fell short of those two presidents.

Professor Casey Mulligan of the University of Chicago early last year offered an upbeat assessment of the former president’s performance in tackling regulations.

In just three years the administration has reversed hundreds of regulations, many of which drone on for hundreds of pages. …Many of the regulations reversed had been written and implemented at the behest of special interests, including large banks, trial lawyers, major health insurance companies, big tech companies, labor unions, and foreign drug manufacturers.

…the Council of Economic Advisers (CEA)…dedicated a great deal of manpower preparing a comprehensive and rigorous assessment of deregulation since 2017. That report, released in June, concluded that the past three years of deregulation is comparable to, and probably exceeds, any deregulatory episode in modern U.S. history. …the CEA report estimates that over the next five to 10 years, the deregulatory efforts of the Trump administration will increase annual real incomes in the United States by $3,100 per household.

I wrote about the above-mentioned report from the CEA in the summer of 2019. The CEA’s goal was to present Trump’s policies favorably, so I certainly don’t object to some skepticism from outsiders, but I also noted that, “the underlying assumptions aren’t overly aggressive” and “even modest improvements in growth lead to meaningful income gains over time.”

In a column for the Hill, James Broughel of the Mercatus Center analyzed Trump’s track record and concluded that some good things happened.

…the president issued Executive Order 13,771 soon after taking office. Its “2 for 1” requirement received the most attention: Two regulations must be identified for elimination each time a new one is put forward. However, perhaps more important is the “regulatory budget” it set up,

which essentially set a cap on new regulatory costs executive branch agencies can impose. …A look at the data suggests the cap is largely working. On Jan. 20, 2017 — Trump’s inauguration day — there were 1,079,601 regulatory restrictions on the books. By Dec. 6, 2019, that number stood at 1,077,822. While the code has not declined substantially by this measure — and the administration should acknowledge that aggregate cuts to-date have been modest — it’s rare to see a code fail to grow across an entire presidential term.

Incidentally, the Mercatus measure of “regulatory restrictions” almost certainly is better than other measures of red tape, so it’s disappointing that Coglianese, Sarin, and Shapiro failed to include it in their analysis.

But if we’re simply looking at the volume of “significant rules,” here’s a tweet from James Pethokoukis showing that the increase in red tape dramatically slowed once Trump took over. 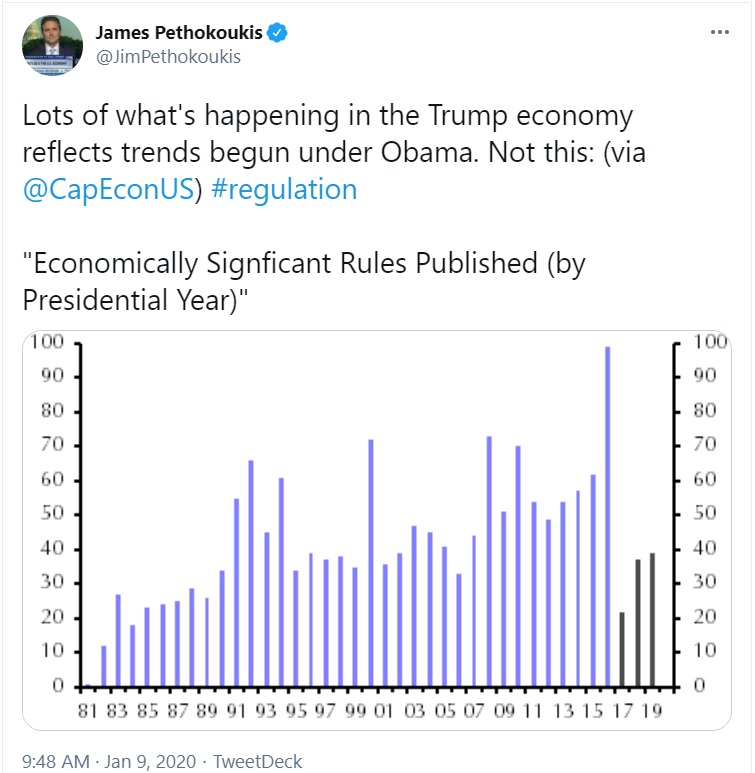 Philip Wallach of the R Street Institute examined Trump’s track record on red tape in an article for National Review in late 2019 and he thought the glass was half empty rather than half full.

Regulation became one area where conservatives wary of Trump allowed themselves high hopes. Trump’s experiences as a developer left him with a bone-deep skepticism of regulations. …There have been some real bright spots for deregulators. Many of the Obama administration’s aggressive and legally dubious environmental rules have been stalled or rolled back,

including the Waters of the United States rule, Corporate Average Fuel Economy standards for tailpipe emissions, and the Clean Power Plan, which regulated greenhouse-gas emissions from existing power plants. The Endangered Species Act will be interpreted so as to make it less burdensome. Promises to scrap Obamacare may have gone unfulfilled, but the administration has quietly and constructively made the program more flexible for states and individuals. …the Trump administration…to an unprecedented degree…has…issu[ed] far fewer new regulations than any of its predecessors.

As you can see, it’s important to define success. Is it a victory to have “far fewer new regulations”?

Or, as you can see in the following excerpt from Wallach’s article, is it a victory to cut red tape by less than Obama increased it?

Last but not least, former Obama official Cass Sunstein opined for Bloomberg back in 2018 that Trump’s main achievement was to slow the tide of new regulations.

So what’s my two cents?

The obvious conclusion is that the Trump Administration did some good things to ease the nation’s regulatory burden, but there was no major paradigm shift.

But a slower rate of increase is still not good news, as illustrated by the fact that the Fraser Institute calculates that America’s score on red tape has declined slightly since 2016.

Indeed, the overall score for economic liberty in the United States has declined slightly since Obama left office, which is evidence for my argument that Trump delivered an incoherent mix of good policies (taxes, for instance) and bad policies (trade, for instance).

P.S. Trump’s Jekyll-Hyde record on economic policy is one of the reasons why I prefer Reaganism over Trumpism. The establishment doesn’t like either of those options, but I very much prefer the one that unambiguously reduces the size and scope of government.