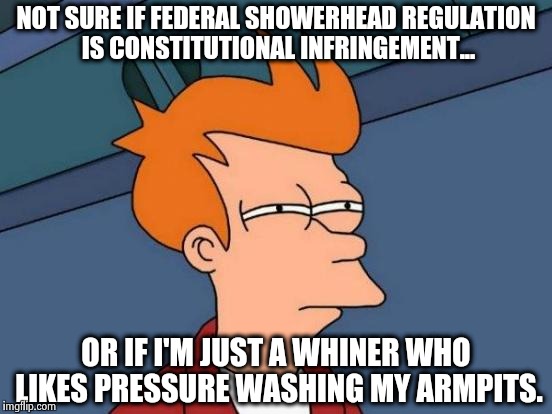 Even though I agree with the “nanny state” crowd on a few issues (sugary soda and cigarettes are not healthy, for instance), I oppose their efforts to impose their preferences using government coercion.

Especially when their initiatives lower our quality of life.

Call me crazy, but I don’t like having to flush a toilet more than once.

But what’s really annoying is going to a hotel that has installed low-flow showerheads, or visiting with someone who has that type of showerhead in their home. At the very least, it means you will spend at least twice as much time as normal to get clean.

Well, we have a bit of good news.

The Trump Administration wants consumers to have the option of enjoying better showers. Here are some excerpts from a CNN story by Sam Fossum and Paul LeBlanc.

The US Department of Energy on Tuesday finalized a pair of new rules rolling back water efficiency standards on showerheads… The new showerhead rule goes after the two-and-a-half-gallon-per-minute maximum flow rate set by Congress in the 1990s.

Under current federal law, each showerhead in a fixture counts toward that limit collectively — but the Energy Department’s new rule means each showerhead individually can reach the limit set by Congress. …”Today the Trump Administration affirmed its commitment to reducing regulatory burdens and safeguarding consumer choice,” Secretary of Energy Dan Brouillette said in a statement. “With these rule changes, Americans can choose products that are best suited to meet their individual needs and the needs of their families.” The rollbacks were quickly rebuked by environmental advocates and consumer and appliance standards groups.

If I understand correctly, we’ll still have inadequate showerheads, but we’ll be allowed to have showers that use more than one of them.

Not the ideal outcome, to be sure, but definitely better than the status quo.

But don’t get too excited. It’s very likely that the incoming Biden Administration will propose and then adopt a new regulation to overturn what just happened.

So refurbish your shower now while the opportunity exists.

Or, if you live in a grandfathered home that still has decent amenities, don’t sell.

P.S. I’m normally not in favor of more laws, but I would strongly favor legislation mandating that all politicians and bureaucrats have to retrofit their residences any time some idiotic new regulation is imposed. In other words, no grandfathering for the ruling class. They should live by the rules they want to impose on the rest of us, whether we’re looking at showerheads, taxes, coronavirus, or education.

P.P.S. The Trump Administration also has a new rule that would allow a return to better-quality dishwashers.