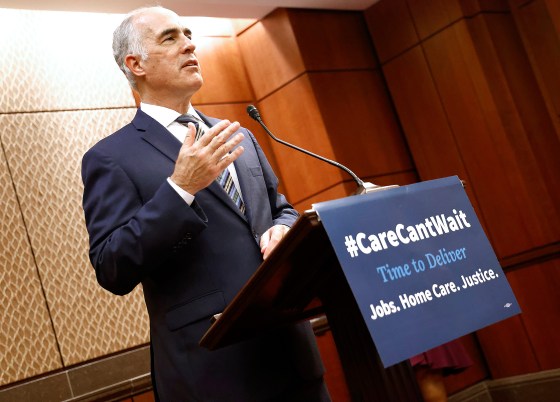 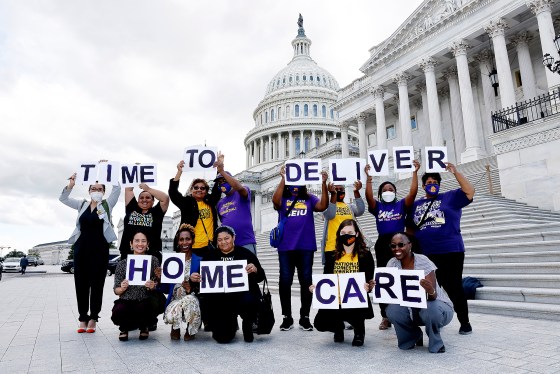 As a candidate during the height of the coronavirus pandemic last year, Biden promised to protect these vulnerable groups, and this spring he initially proposed spending $400 billion on “home and community-based services” (HCBS)—an umbrella term for care that allows older and disabled Americans to live independently, outside of institutional settings. An important House committee later cut that proposed funding to $190 billion in the Democrats’ bill.

Now, key Democrats, including Arizona Sen. Kyrsten Sinema and West Virginia Sen. Joe Manchin, are balking at the package’s total price tag. On Thursday, Manchin said he would not support a bill costing more than $1.5 trillion—a benchmark that would require Democratic leaders to trim their agenda by nearly two-thirds.
As Democrats scramble to rewrite the bill, advocates fear that the home care provisions are likely on the chopping block. One reason is that they’re among the most expensive sections in the bill. Another is that the provisions, while broadly popular, face an enormous amount of competition from other big-ticket items, including a paid leave program, universal pre-K, and measures to prevent climate change, in the crowded spending bill. With Democrats looking to shave as much as two trillion, it’s a zero-sum game: if one program gets funding, that money must come from somewhere else.
While many Democratic legislators say they support more funding for home care, few powerful lawmakers list the plan as their number one goal. And even influential supporters of the provisions, like AARP and Service Employees International Union (SEIU)—competing against lobbying juggernauts such as the Pharmaceutical Research and Manufacturers of America (PhRMA) and the U.S. Chamber of Commerce—are bracing for significant cuts.
Advocates for elderly and disabled Americans are gearing for an even bigger fight—spending on ad campaigns, furiously writing and calling lawmakers, and hoping to rally support for prioritizing the funding. They say the investment in home care is desperately needed not only to prevent a looming crisis in senior care as Baby Boomers age into their 70s, but also to prevent a replay of the devastation that COVID-19 brought to nursing homes last year.
Funding for home care is also, advocates point out, the most popular piece of Biden’s overwhelmingly popular economic agenda. A Data for Progress poll conducted Sept. 10 to 13 found that 79% of likely voters supported investing in long-term care for seniors and people with disabilities, including 87% of Democrats and 75% of Republicans. A more recent poll found that Democrats, Independents and Republicans all view long-term care as among the most important parts of Biden’s agenda. “This is our moment to really provide transformative change to how we care for seniors and people with disabilities,” Pennsylvania Sen. Bob Casey told TIME earlier this year. “If we don’t get it right in this moment, I’m not sure we’re going to be able to do this for 10, 20 years.”

A matter of competing priorities

On the topic of health care alone, Democratic lawmakers’ priorities are split. House Speaker Nancy Pelosi, who was key to passing the original Affordable Care Act, has focused on strengthening that legislation by permanently making health care premiums cheaper. Sen. Bernie Sanders and other progressives, meanwhile, are adamant that Congress add dental, vision and hearing coverage to Medicare. House Majority Whip James Clyburn and other Southern Democrats are pushing to extend Medicaid to poor Americans in conservative states that never expanded that program, framing the idea as a racial justice issue given that it will largely help poor people of color in the South. Democrats also want to lower the price of prescription drugs, which is crucial to helping them pay for the rest of these health care plans.

The main champions of the home care funding are Casey, who chairs the Senate Aging Committee, and Rep. Debbie Dingell of Michigan, along with Senators Maggie Hassan of New Hampshire and Tammy Duckworth of Illinois—none of whom lead committees with control over spending. “We’re at a point when a lot of decision making is at leadership level, and it has been more difficult to make sure that there’s an understanding of why this should be a top priority for leadership,” says Nicole Jorwic, senior director of public policy at The Arc, a national disability organization that has pushed for HCBS funding.

With so many constituencies fighting for what will likely be fewer dollars, advocacy groups are seeing their lobbying budgets swamped by organizations with deeper pockets. The SEIU, which represents many home care workers, doubled its ad spending in September to $7 million in support of the home care plan, and AARP, typically a powerhouse lobbying force in Washington, has spent $5.56 million lobbying so far this year, slightly more than it had at this point in 2020, according to the Center for Responsive Politics.

But other groups have spent significantly more. PhRMA, the drug industry’s top trade group, vehemently opposes Democrats’ critical drug pricing proposal and has spent more than $15 million lobbying this year. The U.S. Chamber of Commerce, which said it would do everything it could to prevent the spending bill from becoming law, has spent nearly $30 million on lobbying so far. And in late September, the Chamber of Commerce and the Koch-backed group Americans for Prosperity each launched new multi-million dollar ad campaigns opposing the bill.

Another problem facing home care, says Rhonda Richards, an AARP legislative representative, is baked into the issue itself. Lawmakers, like many Americans, don’t relish spending time thinking about who will care for them as their health deteriorates, she says: “There may be a sense of denial or not wanting to think about those issues, and so they don’t until it happens to them or in their family.” And those most directly affected by the funding package—people who need intensive care and those with disabilities—are not the most active political constituency, adds Howard Gleckman, an expert on long-term care at the Urban Institute. Home care workers, the other contingent who would benefit, are mostly low-income women of color, a group that also lacks real political clout.

The more realistic political target of Democrats’ home care proposal may be the family members, typically women, who end up as caregivers for their loved ones when they cannot access professional help at home. But in a package that includes paid family leave and a family caregiver tax credit, Democrats could appeal to those constituencies in different ways.

“It is always a matter of competing priorities,” Gleckman says. “Children generally win that battle. And it’s going to be interesting to see whether or not that happens again this time.”

All of us will require care, eventually

Advocates for elderly and disabled people, as well as care workers, have tried to combat the sense that long-term care can seem like a distant issue by making personal appeals over the last several months. On Sept. 23, they held a rally with members of Congress, at which Hassan described how home care helped her son Ben who has cerebral palsy. High profile champions like Ady Barkan have also used their personal stories to make the case for this care.

“Many of us make the mistake of thinking that we are invincible,” Barkan told TIME during a recent interview, using a synthetic voice to speak due to his ALS. “It’s inevitable that we will require care at some point in our lives. And if we make these critical investments into home and community based services now, we can build a reality where our caregivers are compensated fairly and all of us get the care we deserve.”

As Barkan notes, though, many people like him who need this kind of care don’t currently get it. For some, that means living in nursing homes even if they’d rather live at home, or having limited mobility or access to the ballot box.

Progressives in Congress are still pushing to preserve as much of Biden’s agenda as they can. If Democrats succeed in passing a significant spending bill, even one that is smaller than their $3.5 trillion dollar wishlist, it will likely result in a historic expansion of the federal safety net. Any significant increase to home care funding, combined with a national paid leave program and family caregiver tax credit, would help the millions of Americans. And Democrats’ other health care proposals would benefit seniors, too.

Still, experts on aging say, now is the time to fight. This spending bill is the best chance the country has had to update its system of home-based care in decades. If the moment passes, it may be many more years before Congress addresses the issue again, leaving millions of disabled and elderly Americans vulnerable going forward.

“We came out of COVID and a lot of people were saying, one of the lessons we should learn from the COVID crisis is we have to do a better job providing services to older adults. If we don’t, this is going to happen again,” says Gleckman. “So the question is, based on where we think they’re going, will they have done enough to avoid the same problem the next time we have a pandemic? I think the answer to that question is no.”