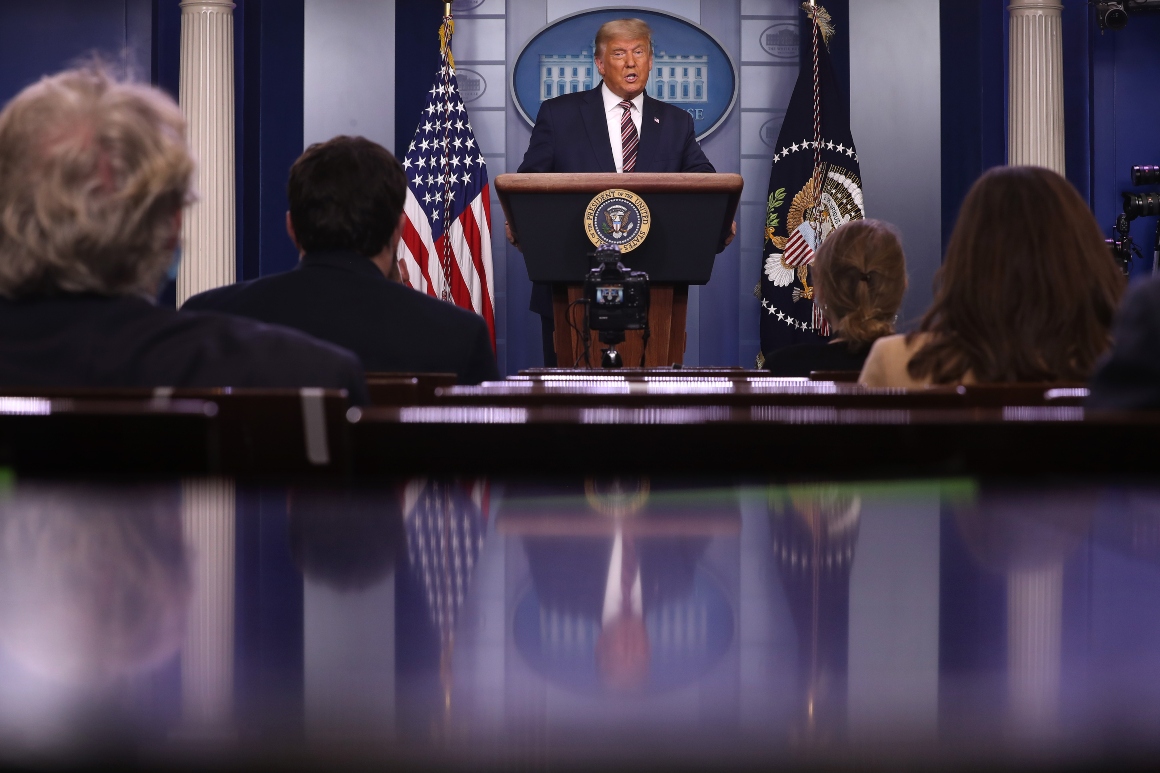 It was just noise when it started — Donald Trump spouting wild, unsubstantiated claims about election fraud, his lawyer seething at an almost comical press conference in the parking lot of a Philadelphia landscaping business.

But one week after an election in which Joe Biden received close to 5 million more popular votes than Trump and captured more than 270 electoral votes, the president and top Republican Party officials are nowhere near conceding.

And with his posturing — and statements of Cabinet officials like Secretary of State Mike Pompeo — Trump is fueling a bonfire that’s consuming the GOP and disrupting the traditional transfer of power.

It will be nearly impossible for Republicans to alter the outcome or prevent Biden from taking office. Counting all the states where he currently leads in voting, Biden has 306 electoral votes. In Michigan, Biden’s lead at the moment is more than 10 times larger than Trump’s winning margin was there in 2016. To date, Trump’s campaign has yet to produce evidence in any state of the kind of widespread ballot fraud the president alleges.

Yet one week after the election, there is no sign any of that is sinking in. Instead, the controversy seems to be metastasizing within GOP circles, as the party unites behind an idea that threatens to distract Washington and state capitals for weeks amid an ongoing pandemic and a looming transition of government.

A majority of Republicans, according to new polling, are convinced the election wasn’t fair. Party officials are attacking one another for failing a litmus test of defending Trump’s interests. Lawmakers in Congress and states across the country are rushing to the cause.

“It kind of reminds you of the hanging chads in 2000,” said Scott Frostman, the Republican Party chair in Sauk County, Wis.

Republicans “out beyond D.C., in the small towns and the communities,” Frostman said, “want the process to play out in making sure that every vote counts.”

The rhetoric from many top GOP officials, however, is far more provocative, often suggesting to the party rank-and-file that the election was stolen, or that the outcome stands to be reversed. Allen West, the chair of the Texas Republican Party, said this weekend Biden and his running mate, Kamala Harris, “have a permanent asterisk by their names.”

“Today the American Republic is the victim of a grand scheme,” West followed up on Monday, “and anyone dismissing this is a mindless lemming.”

The leader of Republicans in the California state Senate framed the conflict in biblical terms. Tweeting a photo of Trump beside an image of Moses with his arms held up by Aaron and Hur, the lawmaker, Shannon Grove, wrote, “I still believe @realDonaldTrump will be President foe [sic] the next 4 years.”

The reverberations are rippling throughout the party, and Republicans who get in the way are getting dragged through the mud.

In Georgia, Republican Sens. Kelly Loeffler and David Perdue demanded that the state’s Republican secretary of state, Brad Raffensperger, resign after the two senators were forced into runoff elections and Trump lagged behind Biden in the state.

The two senators cited no evidence, but they complained that there “have been too many failures in Georgia elections this year.” On Tuesday, members of the state’s House delegation followed up with a letter to Raffensperger demanding a “thorough review.”

The battle is being waged even in states where there are no disputes over the outcome — because the president won. In Ohio, the state’s Republican governor, Mike DeWine, took criticism from fellow Republicans for congratulating Biden. In Tennessee, GOP lawmakers signed a letter to their constituents standing “absolutely and unequivocally” with Trump “as he contests the unofficial results of the Presidential Election of 2020.”

Meanwhile, defeated down-ticket Republicans are parroting Trump’s claims to cast doubt over their own election results, seeking to cloud the entire ballot. Kim Klacik, trounced by her opponent in her congressional race in a heavily Democratic Maryland district, complained baselessly about irregularities in her election and vowed to “investigate” after losing by more than 40 percentage points. And that’s to say nothing of the “Stop the Steal” rallies unfolding in cities across the country or disinformation spreading online.

Once the contained outburst of a wounded president, Trump’s grievances are no longer his alone. They are now the cause of the party at large — with the full blessing of leadership.

“Virtually every prediction about what’s going to happen in the elections was wrong,” said Sen. Roy Blunt (R-Mo.), a member of GOP leadership. “The president wasn’t defeated by huge numbers, in fact he may not have been defeated at all.”

Trevor Potter, a former chair of the Federal Election Commission who served as general counsel to Republican John McCain’s two presidential campaigns, described GOP leadership in recent days as being “fairly restrained, given the pressure they’re under” from Trump.

But Republicans “hanging their hat on the idea that there is a process for recounts,” he said, is different than Trump’s baseless allegations of voter fraud. And the entire episode is making it hard for the GOP to move on.

“The party is worse off in the sense that usually when elections are over, a party wants to turn the corner and get on to new leaders and new messaging and new issues,” Potter said. “And the signs are that at least through this period, this is all about Trump and his sense of grievance. And the lawsuits and the messaging and the local activists saying the election was stolen I think makes it hard for the party to move onto anything else. … It takes a lot of oxygen out of the room.”

The friction for the GOP is that Trump and his supporters are nowhere near putting the election behind them. The president has held steadfast to the unfounded idea that he was robbed of the election, and there is little political benefit to Republicans in crossing him. His support — and that of his supporters — is viewed as critical to the party’s prospects in the Jan. 5 Georgia Senate runoffs and beyond.

Unquestionably, the base is with Trump, after the president spent four years airing conspiracy theories and unfounded complaints about “rigged” elections and widespread voter fraud. Following Biden’s victory on Saturday, after four days of vote counting, a POLITICO/Morning Consult poll found 70 percent of Republicans saying they don’t believe the election was free or fair. And of that group, 85 percent said mail-in voting led to widespread voter fraud.

“I think that it’s very easy in today’s political climate to take a conspiracy theory and turn it into reality in a very short amount of time,” said Rory Cooper, a former adviser to then-Majority Leader Eric Cantor (R-Va.). “And Republican officials are not scared of Trump. They’re scared of Trump voters, and Trump voters right now believe that there’s widespread fraud.”

Looking ahead to the Georgia race, however, Cooper said Republicans are “shooting themselves in their own foot.”

“The two races in Georgia are what’s standing between Joe Biden having unfettered access to his agenda, or Republicans being a check on it,” he said. “And instead, they’re litigating an election that is clearly over.”

The likelihood of legal or political maneuvering altering the outcome of the election is minuscule, most experts agree. Rick Hasen, an election law expert at University of California Irvine School of Law, said it would take “the equivalent of throwing three Hail Mary’s in a row.”

But the effort to contest the election stands to hamper the transition between administrations — and still has the potential to burn through the Republican Party for weeks to come.

Scott Jennings, who worked for George W. Bush and is close to the Trump White House, said most Republicans “aren’t trying to undo the election,” rather they “think that the same processes and procedures that are available to any candidate” should be available to the president.

“Ultimately, the votes have to be counted, the claims have to be adjudicated, and once those two things happen, there will be a winner,” Jennings said. “And the idea that you would throw a monkey wrench into the machinery of what comes next is, in my opinion, ridiculous.”

There will be all of November to find out. Georgia is scheduled to certify results on Nov. 20, with Pennsylvania and Michigan following three days later. On Monday, the Trump campaign filed a lawsuit in Pennsylvania asking a court to block officials in that state from certifying the election’s outcome. That same day, attorneys general representing 10 states filed a brief with the U.S. Supreme Court siding with the Trump campaign on another case it brought in Pennsylvania.

Arizona and Wisconsin, two other states where the race was close, will not certify until Nov. 30, and Dec. 1, respectively, giving state lawmakers three weeks to protest.

“Everybody just needs to be patient,” said Phillip Stephens, the GOP chair in Robeson County, N.C. “It wears thin on the patience of the nation, but democracy is messy. We just have to deal with that.”

Burgess Everett and Jeremy B. White contributed to this report.