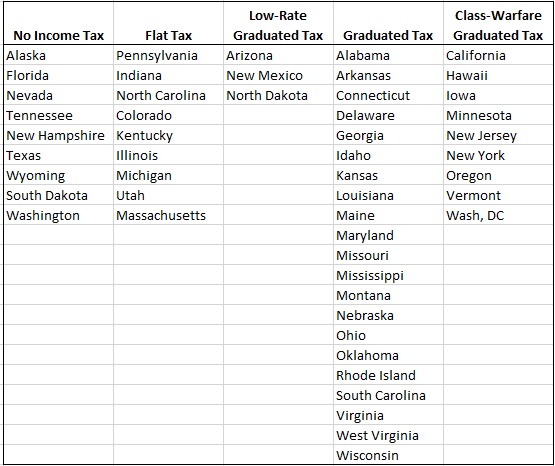 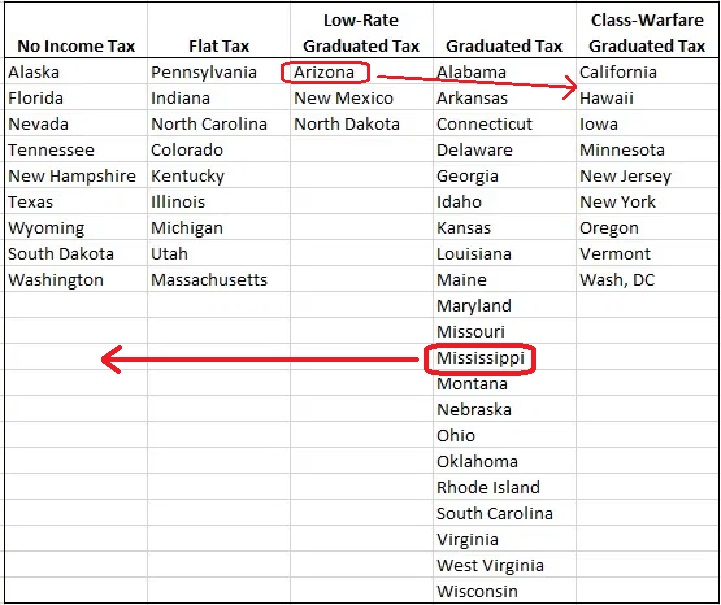 When examining state public policy, big jurisdictions such as California, Texas, New York, and Florida get a lot of attention.

But what about Mississippi? It has mediocre scores for overall economic policy.

And the Magnolia State also isn’t winning any prizes when looking specifically at tax policy.

But the state may be about to take a big step in the right direction.

The governor wants to get rid of his state’s progressive income tax and instead join the no-income-tax club.

The Associated Press reports on the proposal.

Mississippi Gov. Tate Reeves said Monday that the state should phase out its individual income tax by 2030 to attract new residents and businesses that could boost economic growth.

…Mississippi’s population has grown slowly this year after declining in recent years. Florida, Texas and Tennessee, which do not have an individual income tax, have grown rapidly. “Let’s eliminate the income tax, which is one huge speed bump to long-term economic growth and recovery for Mississippi,” Reeves said.

Analyzing the proposal for the Tax Foundation, Katherine Loughead points out a big logistical challenge.

The income tax currently generates a big chunk of revenues for the state’s budget, so abolition of that levy will require serious spending restraint and/or offsetting tax increases.

Mississippi Governor Tate Reeves (R), in his budget proposal for fiscal year (FY) 2022, has announced his goal of phasing out the state’s income tax by 2030. Mississippi’s income tax currently has three marginal rates of 3 percent, 4 percent, and 5 percent. …Under legislation adopted in 2016, the first marginal rate is already being phased out. …Gov. Reeves’ proposal seeks to build upon the ongoing phaseout of the 3 percent rate by also eliminating the 4 percent rate within five years.

Then, subject to revenue availability, the governor hopes to eliminate the 5 percent rate so that, by 2030, Mississippi will join the ranks of the states with no income tax. …Mississippi’s income tax generated nearly 43 percent of the state’s total tax collections in FY 2019, with nearly $1.9 billion coming from the individual income tax and $644 million from the corporate income tax. The state will need to see continued revenue gains over the next decade to phase out the income tax without increasing other taxes. …Even if full income tax repeal is out of reach, however, the state could certainly reduce tax liability, particularly for lower-income residents, by continuing to increase the amount of income that is exempt from taxation, eliminating the first two brackets so a single-rate tax remains, and then reducing the rate below 5 percent.

A flat tax would be a step in the right direction, but state lawmakers should be aggressive and push for total elimination of the income tax. Which probably means the state will need a TABOR-style spending cap to make the numbers work.

The bottom line is that Mississippi is a relatively poor state by American standards (roughly akin to the United Kingdom or New Zealand, for those who prefer international comparisons) and needs bold reforms to catch up to the rest of the nation.

P.S. I also modified the chart to show that Arizona will drop from the middle quintile to the bottom quintile because voters foolishly voted for a class-warfare tax hike earlier this month.

P.P.P.S. Even though the people of Mississippi are the least likely of any state to read my columns, I hope they soon enjoy the benefits of living in a no-income-tax jurisdiction.

P.P.P.P.S. There’s also a proposal to get rid of the Nebraska state income tax.