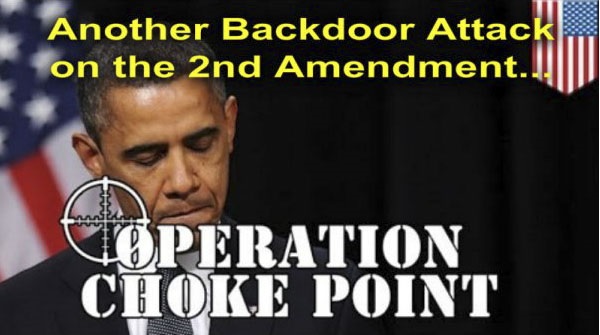 Some policies will improve with Biden in the White House, most notably trade, but also government spending (not because Biden is good, but rather because Republicans will go back to pretending to be fiscally conservative).

But some policies will move in the wrong direction. Biden is awful on tax policy, for instance, though I expect Republicans in the Senate will block his class-warfare agenda.

Biden is also very bad on regulatory issues. Unfortunately, this is an area where the new President (and his appointees) will have plenty of authority to shift policy in the wrong direction.

I’m especially worried that Biden will resuscitate an Obama-era policy of strong-arming banks so they won’t do business with unpopular industries. This video, which I first shared back in 2016, explains this reprehensible policy.

Norbert Michel of the Heritage Foundation, in a column for Forbes, provides some additional background on the policy.

Choke Point consisted of bureaucrats in several independent federal agencies taking it upon themselves to shut legal businesses – such as payday lenders and firearms dealers – out of the banking system. Given the nature of the U.S. regulatory framework, this operation was easy to pull off.

Officials at the Federal Deposit Insurance Corporation (FDIC), for instance, simply had to inform the banks they were overseeing that the government considered certain types of their customers “high risk.” The mere implication of a threat was enough to pressure banks into closing accounts, because no U.S. bank wants anything to do with extra audits or investigations from their regulator, much less additional operating restrictions or civil and criminal charges. Banks are incredibly sensitive to any type of pressure from federal regulators, and they know that the regulators have enormous discretion.

In a column for the Wall Street Journal earlier this year, Phil Gramm and Mike Solon elaborated on the left’s campaign to politicize the banking system.

Banking was used as a weapon against legal, solvent businesses by the Obama administration during Operation Choke Point, a program to deny the disfavored access to banking services. The Federal Deposit Insurance Corp. labeled certain businesses “high risk,” including firearms and ammunition dealers, check-cashers, payday lenders and fireworks vendors.

Unelected regulators, not Congress or courts, marked these industries as “dirty business” and made it “unacceptable for an insured depository institution” to offer them banking services. …With Democrats unable to ban guns legislatively, Rep. Carolyn Maloney admonished banks at a recent hearing to not “finance gun slaughter.” When she urged JPMorgan to deny credit for legal firearm sales as other banks had done, the CEO responded, “We can certainly consider that. Yes.” At the same hearing, Rep. Rashida Tlaib challenged bank CEOs: “Will any of your banks make a commitment to phase out your investments in fossil fuels and dirty energy?” The CEOs declined to defend fossil fuels… Letting political intimidation dictate the availability of private credit endangers freedom and stifles productivity growth and job creation. …The use of political intimidation to allocate capital is an assault on economic efficiency and freedom.

There is, however, a bit of good news.

The Trump Administration ended Operation Choke Point back in 2017.

And, although it is happening at the last minute, the Trump Administration is now trying to strengthen the rule of law so banks won’t feel pressured to discriminate against certain industries in the future.

In a column published yesterday by the Wall Street Journal, Brian Brooks and Charles Calomiris of the Office of the Comptroller of the Currency (OCC) explain the new rule that their agency has unveiled.

…there have been too many allegations of banks cutting off vital services, credit and capital that legal businesses rely on to create jobs, meet community needs and support the economy. The Office of the Comptroller of the Currency, where we serve as acting comptroller and chief economist, respectively, on Friday proposed a rule to prevent banks from discriminating against legal businesses and individuals.

The rule would require bankers to do what they do best: assess risk and underwrite credit decisions. …politically driven discrimination against particular industries has threatened fairness in banking. Under the Obama administration, Operation Choke Point, in which the OCC did not take part, involved regulators discouraging banks from serving legal and constitutionally protected businesses such as payday lenders and gun and ammunition sellers. …the Dodd-Frank Act of 2010 added to the OCC’s traditional mission of safety and soundness the obligation to ensure fair access to financial services… Banks may not exclude entire parts of the economy for reasons unrelated to objective, quantifiable risks specific to an individual customer.

Sadly, if Biden has the same attitude as Obama about the rule of law, a future OCC can reverse anything Trump’s people adopt.

I’ll close with a libertarian-minded observation.

Because I believe in freedom of association, I think banks should have the liberty to discriminate against specific businesses, or even entire industries.

But there’s a big difference between banks choosing to discriminate and being coerced into such behavior by government regulators.

So it was disgusting that Obama’s regulators went after industries they didn’t like, such as gun dealers.

But it would be equally reprehensible if a Republican Administration went after an industry it didn’t like, such as legal marijuana.

P.S. The broader lesson to learn from Operation Choke Point is that regulatory power for governments is a vehicle for corruption and malfeasance.